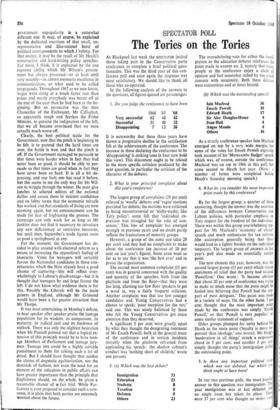 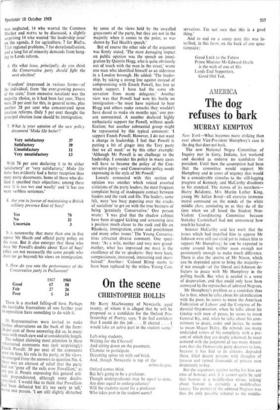 The Tories on the Tories

At Blackpool last week the SPECTATOR invited those taking part in the Conservative party conference to complete a brief political ques- tionnaire. This was the third year of this con- ference poll and once again the response was most satisfactory. We should like to thank all those who co-operated.

In the following analysis of the answers to the questions, all figures quoted are percentages: 1. Do you judge the conference to have. been

1966 '67 '68 Very successful 62 48 42 Successful 31 40 32 Disappointing 7 12 26 It is noteworthy that these three years have shown a progressive decline in the satisfaction felt at the achievements of the conference. The increase in those declaring the conference to be 'disappointing' is striking (one in four now hold this view). This discontent ought to be related to the more specific criticism produced by the next question, in particular the criticism of the character of the debates.

2. What is your principal complaint about this year's conference?

The largest group of complaints (29 per cent) referred to 'woolly' debates and 'vague' motions provided for debate; the motions were criticised as being uncontroversial or 'wishy-washy, like Tory policy'; some felt that 'individual ex- pression was strangled for the sake of con- sensus.' This line of complaint has emerged strongly in previous years and no doubt partly reflects the frustrations of minority groups.

However, a group of the same size (also 29 per cent) said they had no complaints to make about the conference (an increase of 10 per cent on last year's figure). Some even went so far as to say that it was 'the best ever' and to praise the organisation.

The second most common complaint (11 per cent) was in general concerned with the quality and quantity of the speeches, both from the platform and from the floor—that they were too long, allowing too few floor speakers to get a word in, was a fairly frequent criticism. Another complaint was that too few younger candidates and Young Conservatives had a chance to speak; 'poor reception for the YCS,' said one. This was nicely balanced by those who felt the Young Conservatives got more attention than they deserved, A significant 5 per cent were greatly upset by what they thought the denigrating treatment of Mr Enoch Powell, both in the general tenor of the conference and in certain incidents (notably when the platform refrained from applauding his speech: the shadow cabinet's conduct was 'nothing short of childish,' wrote one person).

Immigration 33 Education 23 Students 8 Taxation 8 Defence 5 Others 23 The overwhelming vote for either the immi• gration or the education debates reinforces the point made in answer no. 2, namely that many people at the conference enjoy a clash of opinion and feel somewhat stifled by too much concern with unanimity. Both these debates were contentious and at times heated.

(b) Which was the outstanding speech?

lain Macleod 36 Enoch Powell 19 Edward Heath 17 Sir Alec Douglas-Home 4 Joan Hall 4 Angus Maude 4 Others 16 As a strictly conference speaker kin Macleod emerged on top by a very wide margin, for some of the votes for Enoch Powell expressly took account of his 'Morecambe Budget' speech which was, of course, outside the conference. Macleod was on top in 1966 in this poll, but came second to Heath last year. (Note: a number of forms were completed before Heath's Saturday morning speech.) 4. What do you consider the most important point made by this conference?

By far the largest group, a quarter of those answering, thought the answer was the assertion of the differences between Conservative and Labour policies, with particular emphasis on Tory respect for the freedom of the individual. There was within this group overwhelming sup- port for Mr Macleod's 'economy of choice' speech and much enthusiasm for tax reforms (the assumption generally being that these would lead to a lighter burden on the individual taxpayer). The largest group of answers in last year's poll also made an essentially similar point.

The new element this year, however, was the second largest group (13 per cent) which voiced sentiments of relief that the party had resisted Towellism.' One wrote: 'It became obvious that about 20 per cent of conference was trying to make so much noise that the press might be fooled into believing that Powell had the sup- port of most delegates.' This point was made in a variety of ways. On the other hand, 5 per cent thought that the most important point made by the conference was simply 'Enoch Powell,' or that 'Powell is very popular,' or some similar statement of support. Other groups plumped for unity behind Mr Heath as the main point (loyalty is more ina- portant than ideology,' one wrote); Mr Hoggs 'moderation in all things' struck a responsive chord in 5 per cent; and another 5 per cell simply thought the party's immigration policy the outstanding point.

5. Is there any important political issue which was not debated, but which you think ought to have been?

In our two previous polls, the most popular answer to this question was immigration. This year immigration was at last debated, and no single issue has taken its place. There were 37 per cent who thought no major issue was neglected, 14 who wanted the Common Market and NAFTA to be discussed, a slightly surprising 14 who wanted 'the leadership issue' on the agenda, 8 for agriculture, 7 for Biafra, 7 for regional problems, 7 for denationalisation, and a long list of minority demands from hang- ing to Lords reform.

6. On what issue, principally, do you think the Conservative party should fight the next election?

'Freedom' (expressed in various forms—of the individual, from 'the ever-growing powers of the state,' from excessive taxation) was the majority choice, as it had been last year. There were 28 per cent for this, in general terms, plus another 28 per cent who concentrated upon taxation reforms. Only 5 per cent thought the principal election issue should be immigration.

7. What is your opinion of the new policy document 'Make life better?

Very satisfactory 37 Satisfactory 39 Unsatisfactory 11 Very unsatisfactory 13 With 76 per cent declaring it to be either 'satisfactory' or 'very satisfactory,' Make life better has evidently had a better reception than many party documents. Some of those who dis- liked it specified their objections; among these were 'it is too wet and woolly' and 'it has too many verbless sentences.'

8. Are you in favour of maintaining a British military presence East of Suez?

Yes 76 No 21 Uncertain 3 It is noteworthy that more than one in five oppose Mr Heath and official party policy on this issue. But it also emerges that those who share Mr Powell's doubts about 'East of Suez' policy are not necessarily the same people who share (or go beyond) his views on immigration.

9. How do you rate the performance of the Conservative party in Parliament?

10. Representatives were invited to make further observations on the back of the form: 38 per cent of those answering did so, in many cases with much care and at considerable length. The subject claiming most attention in these volunteered comments was (not surprisingly) Enoch Powell: 30 per cent of the comments were on him, his role in the party, or his views. As emerged from the answers to question No. 4, there was an element of relief that the party had not 'gone off the rails over Powellism,' as one put it. People expressing this general atti- tude preponderated, although some doubts remained. 'I would like to think that Powellism ad been defeated but it's too early to tell,'

rote one person. 'I am still slightly disturbed

by some of the views held by the so-called grass-roots of the party, but they are not in the majority when it comes to the point, as was shown by Ted Heath's speech.'

But of course the other side of the argument was firmly stated. 'The most damaging impact on public opinion was the speech on immi- gration by Quintin Hogg, who is quite obviously out of touch with the man in the street,' wrote one man who identified himself as an alderman in a London borough. He added: 'The leader- ship, by taking a strong line against instead of compromising with Enoch Powell, has lost us much support. I have had the same ob- servation from many delegates.' Another view was that Powell had won his battle on immigration—'he must have rejoiced to hear Hogg and others make remarks they wouldn't have dared to make six months ago,' one per- son commented. A number declared highly enthusiastic support for Powell, without quali- fication; but another substantial group might be represented by this typical comment: 'I support Enoch Powell. However, I do not want a change in leadership. I feel that Powell is putting a bit of ginger into the Tory party that we all need;' or by this other example: 'Although Mr Powell is no challenge to the leadership, I consider his policy in many cases will have to become the policy of the Con- servative party—and Conservative policy needs expressing in the style of Mr Powell.'

Loosely connected with this section of opinion was another which voiced assorted criticisms of the party leaders, the most frequent complaint being of inadequate contact between leaders and the rank and file. The leaders, some felt, were 'too busy papering over the cracks of socialism' to get on with the true business of being 'genuinely Conservative.' One person wrote : 'I was glad that the shadow cabinet have been dragged kicking and screaming into a position much closer to the rank and file on Rhodesia, immigration, crime and punishment and many other issues.' The Young Conserva- tives attracted diverse comment. One speci- men: 'As a wife, mother and very new grand- mother, what has impressed me most is the excellence of the YC speakers : they were keen, compassionate, interested, interesting and short- haired!' Another : 'Colonel Blimp seems to have been replaced by the witless Young Con-

servatives. I'm not sure that this is a good thing.'

And to end on a sunny note this was in- scribed, in this form, on the back of one ques- tionnaire : Good Luck to the Future Prime Minister Mr Edward Heath is the wish of one of His Lands End Supporters.