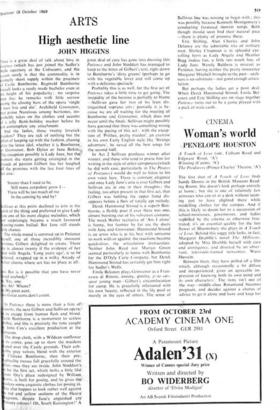 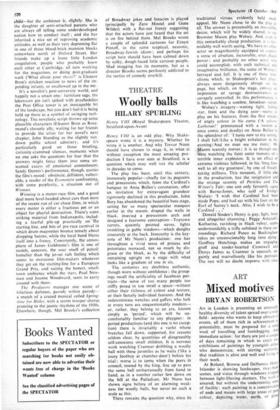 A Touch of Love (ABC, Fulham Road and Edgware Road, 'A') Winning (Casino, 'A') The Producers (Prince Charles' Theatre, 'A') The first shot of A Touch of Love finds Sandy Dennis in the British Museum Read- ing Room. She doesn't look perhaps entirely at home ; but she is one of relatively few actresses who can sit at a desk without seem- ing just to have alighted there while modelling clothes for the campus. And if this is likely to doom her to a succession of school-mistresses, governesses, and ladies regkrded by the cinema as otherwise frus- trated, it's an essential quality for the late flower of Bloomsbury she plays in A Touch of Love. Behind this soggy title lurks, in fact, Margaret Drabble's novel The Millstone. adapted by Miss Drabble herself with care and astringency, and directed by an obser- vant, television-trained newcomer. Waris Hussein.

Between them, they have pulled off a film which, although occasionally a bit diffuse and inexperienced, gives an agreeable. im- pression of knowing both its own mind and its own characters'. The story isn't out of the way—middle-class Rosamund becomes pregnant, and decides against a chorus of advice to go it alone and have and keep her child—but the ambience is, slightly. She is the daughter of semi-attached parents who are always off telling some underdeveloped nation how to conduct itself ; and she has inherited a nice set of reproving academic attitudes, as well as their very depressing flat in one of those blood-brick mansion blocks somewhere north of Oxford Street. Her friends make up a loose little London coagulation, people who probably knew each other at Cambridge, all now working for the magazines, or doing post-graduate work ('What about your thesis?' is Eleanor Bron's stricken reaction to news of the im- pending infant), or swallowed up in the BBC.

It's a novelist's post-university world, and happily not a smart one: furniture sags, the lukewarm gin isn't spiked with psychedelics the Post Office tower is an inescapable bit of the landscape, but you don't feel it is being held up there as a symbol of swinging tech- nology. The novelistic script throws up some plausible characters (Eleanor Bron as Rosa- mund's slovenly ally, waiting for her friends to provide the crisis for her novel's next chapter, John Standing as the slightly run- down public school admirer) ; and it's particularly good on those bristling, curiosity-crammed silences, moments when no one asks the questions for fear that the answers might force them into some un- wanted excess of emotional commitment. Sandy Dennis's performance, though. carries the film's mood : obstinate, diffident, vulner- able, a reader of the Economist confronting, with some perplexity, a situation out of Woman.

Winning is a motor-race film, and a good deal more level-headed about cars than most of the recent run of car chase films, in which every motor is either a fractious pet or an object for playful destruction. There's some striking material from Indianapolis, includ- ing a fearful pile-up practically on ftie starting-line, and bits of pre-race carnival in which drum majorettes bounce tensely about dropping batons, while the local band blares itself into a frenzy. Consistently, the atmos- phere of James Goldstone's film is one of motels, concrete, the sour smell of petrol; homelier than the jet-set rich feeling which seems to overcome film-makers whenever they get on the starting-line for a European Grand Prix, and suiting the honest, small- town ambience which the stars, Paul New- man and Joanne Woodward, seem to carry around with them.

The Producers manages one scene of hilarious daftness, parody within parody— a snatch of a crazed musical called Spring- time for Hitler, with a storm trooper chorus prancing to the jaunty rhythms of the 1930s. Elsewhere, though, Mel Brooks's collection of Broadway jokes and lunacies is played (principally by Zero Mostel and Gene Wilder) with a flat-out frenzy suggesting that the actors have just heard that the set is on fire behind them. Mel Brooks wrote a couple of splendid cartoons for Ernest Pintoff, in the same sceptical, neurotic, Broadway-Jewish idiom ; and perhaps his script here should have been calmed down by sulky, dough-faced little cartoon people. Mad mugging has its moments, but as a director Brooks seems perilously addicted to the tactics of comedy overkill.