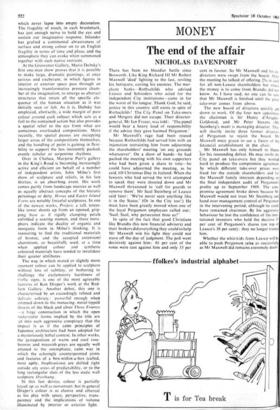 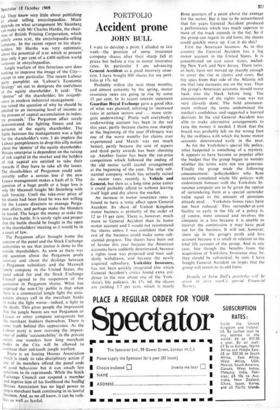 The end of the affair

There has been no bloodier battle since Bosworth. Like King Richard III Mr Robert Maxwell 'died' fighting to the last, reviling his betrayers, cursing his enemies. The mer- chant banks—Rothschilds who advised Leasco and Schroders who acted for the independent City institutions—came in for the worst of his tongue. Thank God, he said, justice in this country still exists in spite of Rothschilds! The City Panel on Take-overs and Mergers did not escape. Their director- general, Mr Ian Fraser, was told : 'The panel would bear a heavy load of responsibility if the advice they gave harmed Pergamon.'

Mr Maxwell's rage had been roused because Rothschilds had served him with an injunction restraining him from adjourning the shareholders' meeting 'on any grounds whatsoever'. On a show of hands—he had packed the meeting with his own supporters who had been given a share to vote—he could have adjourned the meeting, as he said, till Christmas Day in Iceland. When the lawyers who had served the writ attempted to speak they were shouted down and Mr Maxwell threatened to 'call for guards to remove them'. Mr Saul Steinberg of Leasco said later : 'We've never seen anything like it in the States.' (Or in the City too!) He must have been greatly moved when one of the loyal Pergamon employees called out: 'Saul, Saul, why persecutest thou us?'

In spite of the fact that good Christians like Brandts (his new financial advisers) and their brokers did everything they could to help Mr Maxwell win his fight they could not stave off the day of judgment. The poll went decisively against him: 61 per cent of the votes were cast against him and only 33 per

cent in favour. So Mr Maxwell and his co- directors were swept from the board. After the meeting he talked of offering 25s in cash for all non-Leasco shareholders but where the money is to come from Brandts did not know. As I have said, no one can be sure that Mr Maxwell is finished until the great take-over comes from above.

The new board of directors quickly got down to work. Of the four new appointees the chairman is Sir Henry d'Avigdor- Goldsmid, and Mr Peter Stevens (Mr Steinberg's man) is managing director. They will shortly invite three former directors of Pergamon to rejoin the board. Mr Maxwell must groan to see a figure of the financial establishment in the chair.

a Mr Maxwell has only himself to blame for his resounding defeat. He may revile the City panel on take-overs but they worked hard to produce the compromise agreement by which different take-over prices were fixed for the outside shareholders and for the Maxwell family interests depending on the final independent audit of Pergamon's profits up to September 1969. The com- promise agreement brdke down because Mr Maxwell would not trust Mr Steinberg and hand over management control of Pergamon in the intervening period, although he could have remained chairman. By his aggressive behaviour he lost the confidence of the insti- tutional investors who held the decisive 15 per cent of Pergamon's shares (on top of Leasco's 38 per cent): they no longer trusted him.

T is for Tea break fui. They know very little about publishing or about selling encyclopaedias. Much depends on what arrangement Mr Steinberg can make with Mr Charles Hardie, the chair- man of British Printing Corporation, which jointly owns n.sc, the encyclopaedia-selling company. In the recent report to his share- holders Mr Hardie was very optimistic. about the potential of 'Esc which at present does only 4 per cent of a £400 million world turnover in encyclopaedias.

Jungle warfare of this ferocious sort does nothing to improve the image of the City— except in one particular. The recent Labour party pamphlet on 'Labour's Economic Strategy' set out to denigrate the usefulness of the equity shareholder. It said: 'The "demise" of the shareholder, his insignffi- canee in modern industrial management . . . has raised the question of why he should be entitled to an increasing level of income as the process of capital accumulation in indus- try proceeds.' The Pergamon affair surely demonstrated the fighting fitness and im- portance of the equity shareholder. The battle between the managements was a fight for the shareholder's vote. I do implore the Labour pamphleteers to drop this silly notion about the 'demise' of the equity shareholder. Private enterprise is dependent on the raising of risk capital in the market and the holders of risk capital are entitled to take their rewards if they have to take all the losses. The shareholders of Pergamon could con- ceivably suffer a serious loss if the new Leasco management makes a hash of it. The question of a huge profit or a huge loss is why Mr Maxwell fought Mr Steinberg with such ferocity. Until the take-over price of his shares had been fixed he was not willing for the Leasco directors to manage Perga- mon affairs, and perhaps make the blunders he feared. The larger the money at stake the fiercer the battle. It is surely right and proper that the battle should be fought in the open at the shareholders' meeting as it would be in a court of law.

The Pergamon affair brought home the concern of the panel and the Stock Exchange authorities to see that justice is done to the outside shareholders. As soon as there was any question about the Pergamon profit accuracy and about the dealings between a Pergamon subsidiary and the Maxwell family company in the United States, the panel asked for and the Stock Exchange Council agreed to the suspension of the quotation in Pergamon shares. What has surprised the non-City public is that when there is a commercial jungle fight the anta- gonists always call in the merchant banks to make the fight worse—indeed, a fight to the death. This gives people the impression that the jungle beasts are not Pergamon or Leasco or other company antagonists but the merchant bankers themselves. There is some truth behind this appearance. As the labour party is now stressing the import- ance of public 'accountability' in the private sector, one wonders how long merchant banks in the City will be allowed to continue their red-tooth jungle warfare.

There is an Issuing Houses Association: which is ready to take disciplinary action if any of its members offend the panel code of good behaviour but it can attach few sanctions to its reprimands. While the Stock Exchange Council can suspend a member and deprive him of his livelihood the Issuing Houses Association has no legal power to stop a merchant bank continuing in its lawful business. And, as we all know, it can be ruth- less as well as lawful.