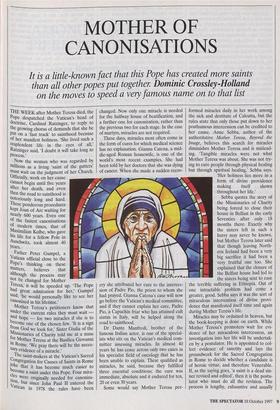 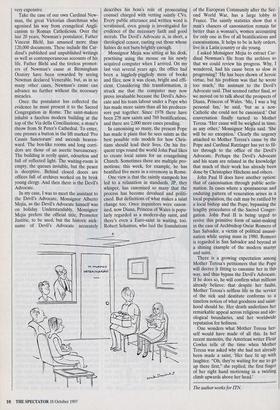 than all other popes put together Dominic Crossley-Holland

THE WEEK after Mother Teresa died, the Pope despatched the Vatican's head of doctrine, Cardinal Ratzinger, to reply to the growing chorus of demands that she be Put on a 'fast track' to sainthood because of her manifest holiness. 'She lived such a resplendent life in the eyes of all, Rat2inger said, 'I doubt it will take long to Process' Now the woman who was regarded by nullions as a living 'saint of the gutters' must wait on the judgment of her Church. Officially, work on her cause cannot begin until five years after her death, and even then the road to sainthood is notoriously long and hard. These ponderous procedures kept Joan of Arc waiting for nearly 600 years. Even one of the fastest canonisations of mo.dern times, that of Maximilian Kolbe, who gave his life for a fellow Pole in Auschwitz, took almost 40 years.

Father Peter Gumpel, a Vatican official close to the Pope's thinking on these matters, believes that although the process may not be changed for Mother Teresa, it will be speeded up. 'The Pope had great admiration for her,' Gumpel said; 'he would personally like to see her canonised in his lifetime.' Mother Teresa's petitioners know .that ander the current rules they must wait — and hope — for two miracles if she is. to become one of the chosen few. 'It is a sign ,fretri God we look for,' Sister Giulia of the Missionaries of Charity told me at a mass for Mother Teresa at the Basilica Giovanni in Rome. 'We pray there will be the neces- sary evidence of a miracle.' The saint-makers at the Vatican's Sacred ongregation for Causes of Saints in Rome Joke that it has become much easier to become a saint under this Pope. Four mira- e.lcs were originally needed for canonisa- tion, but since John Paul II entered the Vatican in 1978 the rules have been changed. Now only one miracle is needed for the halfway house of beatification, and a further one for canonisation, rather than the previous two for each stage. In the case of martyrs, miracles are not required.

These days, miracles most often come in the form of cures for which medical science has no explanation. Gianna Catena, a mid- dle-aged Roman housewife, is one of the world's most recent examples. She had been told by her doctors that she was dying of cancer. When she made a sudden recov- ery she attributed her cure to the interces- sion of Padre Pio, the priest to whom she had prayed. Gianna Catena's case will now go before the Vatican's medical committee, and if they cannot explain her cure, Padre Pio, a Capuchin friar who has attained cult status in Italy, will be helped along the road to sainthood.

Dr Dante Manfredi, brother of the famous Italian actor, is one of the special- ists who sits on the Vatican's medical com- mittee assessing miracles. In almost 40 years he has come across only two cases in his specialist field of oncology that he has been unable to explain. These qualified as miracles, he said, because they fulfilled three essential conditions: the cure was immediate, absolute and it endured for ten, 20 or even 30 years.

Some would say Mother Teresa per- formed miracles daily in her work among the sick and destitute of Calcutta, but the rules state that only those put down to her posthumous intercession can be credited to her cause. Anne Sebba, author of the authoritative Mother Teresa, Beyond the Image, believes this search for miracles diminishes Mother Teresa and is mislead- ing. 'Tangible miracles were not what Mother Teresa was about. She was not try- ing to cure people through physical healing but through spiritual healing,' Sebba says.

'Her holiness lies more in a form of divine providence making itself shown throughout her life.'

Miracles may be ordained in heaven, but the book-keeping is done on earth. While Mother Teresa's promoters wait for evi- dence of her miraculous intercession, an investigation into her life will be undertak- en by a postulator. He is appointed to col- lect evidence of sanctity and lays the groundwork for the Sacred Congregation in Rome to decide whether a candidate is of heroic virtue, and therefore Venerable. If, as the saying goes, 'a saint is a dead sin- ner revised and edited', then it is the postu- lator who must do all the revision. The process is lengthy, exhaustive and usually the terrible very expensive.

Take the case of our own Cardinal New- man, the great Victorian churchman who agonised his way from evangelical Angli- canism to Roman Catholicism. Over the last 20 years, Newman's postulator, Father Vincent Blehl, has amassed more than 120,000 documents. These include the Car- dinal's published and unpublished writings as well as contemporaneous accounts of his life. Father Blehl and the tireless promot- ers of Newman's cause at Birmingham Oratory have been rewarded by seeing Newman declared Venerable, but, as in so many other cases, Newman's cause can advance no further without the necessary miracles.

Once the postulator has collected the evidence he must present it to the Sacred Congregation in Rome. The saint-makers inhabit a faceless modern building at the top of the Via della Conciliazione, a stone's throw from St Peter's Cathedral. To enter, one presses a button in the lift marked 'Pro Causis Sanctorum' and ascends heaven- ward. The box-like rooms and long corri- dors are those of an ascetic bureaucracy. The building is eerily quiet, odourless and full of reflected light. The waiting-room is empty, the queues invisible, but the peace is deceptive. Behind closed doors are offices full of archives worked on by brisk young clergy. And then there is the Devil's Advocate.

In my case, I was to meet the assistant to the Devil's Advocate, Monsignor Alberto Mejia, as the Devil's Advocate himself was on holiday. Understandably, Monsignor Mejia prefers the official title, Promotor Justitie, to be used, but the historic nick- name of Devil's Advocate accurately describes his boss's role of prosecuting counsel charged with vetting saintly CVs. Every public utterance and written word is scrutinised, even gossip is investigated for evidence of the necessary faith and good morals. The Devil's Advocate is, in short, a theological censor, casting out those whose haloes do not burn brightly enough.

Monsignor Mejia was sitting at his desk, practising using the mouse on his newly acquired computer when I arrived. On my last visit several years ago, the office had been a higgledy-piggledy mess of books and files; now it was clean, bright and effi- cient. Considering this transformation, it struck me that the computer may now prove invaluable because the Devil's Advo- cate and his team labour under a Pope who has made more saints than all his predeces- sors put together. Since 1978 there have been 278 new saints and 769 beatifications, and there are 2,000 more cases pending.

In canonising so many, the present Pope has made it plain that he sees saints as the best possible role models for how Chris- tians should lead their lives. On his fre- quent trips round the world John Paul likes to create local saints for an evangelising Church. Sometimes these are multiple pro- motions; this week, for example, he has beatified five more in a ceremony in Rome.

One view is that the saintly stampede has led to a relaxation in standards. JP, they whisper, has canonised so many that the process has become devalued and politi- cised. But definitions of what makes a saint change too. Once inquisitors were canon- ised, now Diana, Princess of Wales is popu- larly regarded as a modem-day saint, and there's even a Euro-saint in waiting, too. Robert Schuman, who laid the foundations of the European Community after the Sec- ond World War, has a large lobby in France. The saintly statistics show that a man's chances of canonisation remain far better than a woman's, women accounting for only one in five of all beatifications and canonisations. It helps to be in holy orders, live in a Latin country or die young.

I asked Monsignor Mejia to extract Car- dinal Newman's file from the archives so that we could review his progress. Why, I wondered, had his cause been so slow in progressing? 'He has been shown of heroic virtue, but his problem was that he wrote too much,' the assistant to the Devil's Advocate said. That seemed rather final, so we moved on to talk about the prospects of Diana, Princess of Wales. `Me, I was a big personal fan,' he said, 'but as a non- Catholic she could not be canonised.' Our conversation finally turned to Mother Teresa. 'Her cause will be weighed in time, as any other,' Monsignor Mejia said. 'She will be no exception.' Clearly the urgency attached to Mother Teresa's cause by the Pope and Cardinal Ratzinger has yet to fil- ter through to the office of the Devil's Advocate. Perhaps the Devil's Advocate and his team are relaxed in the knowledge that much of their work has already been done by Christopher Hitchens and others.

John Paul II does have another option: that of canonisation through public accla- mation. In cases where a spontaneous and enduring pattern of veneration arises in a local population, the cult may be ratified by a local bishop and the Pope, bypassing the lengthy procedures of the Sacred Congre- gation. John Paul II is being urged to revive this primitive form of saint-making in the case of Archbishop Oscar Romero of San Salvador, a victim of political assassi- nation while saying mass in 1980. Romero is regarded in San Salvador and beyond as a shining example of the modern martyr and saint.

There is a growing expectation among Mother Teresa's petitioners that the Pope will decree it fitting to canonise her in this way, and thus bypass the Devil's Advocate. If he does so, he will confirm what millions already believe: that despite her faults, Mother Teresa's selfless life in the service of the sick and destitute conforms to a timeless notion of what goodness and saint- hood should be. Her death underlines her remarkable appeal across religious and ide- ological boundaries, and her worldwide reputation for holiness.

One wonders what Mother Teresa her- self would have made of all this. In her recent memoirs, the American writer Fleur Cowles tells of the time when Mother Teresa was asked why she had not already been made a saint, 'Her face lit up with laughter. "Oh, they're waiting for me to go up there first," she replied, the first finger of her right hand motioning in a twirling climb upwards above her head.'

The author works for ITN.