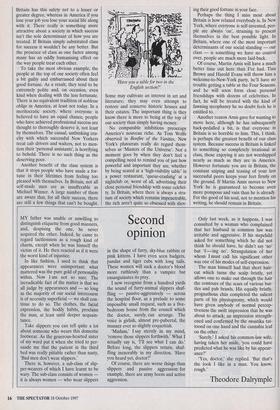 MY father was unable or unwilling to distinguish etiquette from good manners, and, despising the one, he never acquired the other. Indeed, he came to regard tactlessness as a rough kind of charm, except when he was himself the victim of it. He then reacted as if it were the worst kind of injustice.

In like fashion, I used to think that appearances were unimportant: what mattered was the pure gold of personality within. Now I am not so sure. The ineradicable fact of the matter is that we all judge by appearances and — so long as the majority of our social intercourse is of necessity superficial — we shall con- tinue to do so. The clothes, the faicial expression, the bodily habits, proclaim the man, at least until deeper acquain- tance.

Take slippers: you can tell quite a lot about someone who wears this domestic footwear. As the generous-hearted sister of my ward put it when she tried to per- suade me that the patient in the third bed was really pitiable rather than nasty, `Bad men don't wear slippers.'

There is, however, a sub-class of slip- per-wearers of which I have learnt to be wary. The sub-class consists of women — it is always women — who wear slippers in the shape of furry, sky-blue rabbits or pink kittens. I have even seen badgers, pandas and tiger cubs with long tails. These women will suck a doctor's blood more ruthlessly than a vampire bat exsanguinates its prey.

I now recognise from a hundred yards the sound of furry-animal slippers shuf- fling — passive-aggressively — across the hospital floor, as a prelude to some impossible small request, such as a five- bedroom house from the council which the doctor, surely, can arrange. The voice is girlish, almost pre-pubertal, the manner ever so slightly coquettish.

'Madam,' I say sternly in my mind, 'remove those slippers forthwith.' What I actually say is, 'I'll see what I can do.' Before long, the slippers return, shuf- fling inexorably in my direction. 'Have you heard yet, doctor?'

Of course, there are worse things than slippers and passive aggression: for example, there are army boots and active aggression. Only last week, as it happens, I was consulted by a woman who complained that her husband in common law was irritable and aggressive. If his stepchild asked for something which he did not think he should have, he didn't say `no' but 1--ing no'. Strangulation of her whom I must call his significant other was one of his modes of self-expression.

The man himself had that short hair- cut which turns the scalp bristly, yet allows one to make out through the hair the contours of the scars of various bat- tles and pub brawls. His equally bristly, prognathous chin completed the salient parts of his physiognomy, which would have given anybody of normal percep- tiveness the swift impression that he was about to attack; an impression strength- ened and confirmed by the swastika tat- tooed on one hand and the cannabis leaf on the other.

'Surely,' I asked his common-law wife, having taken her aside, 'you could have predicted what he was like by his appear- ance?'