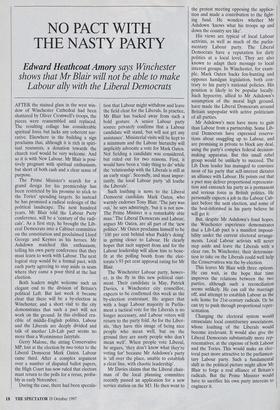 NO PACT WITH THE NASTY PARTY

AFTER the stained glass in the west win- dow of Winchester Cathedral had been shattered by Oliver Cromwell's troops, the pieces were reassembled and replaced. The resulting collage has considerable spiritual force but lacks any coherent nar- rative. Elsewhere in the building a sign proclaims that, although it is rich in spiri- tual resources, a donation towards the church roof would be very welcome. And so it is with New Labour. Mr Blair is posi- tively pregnant with spiritual enthusiasm, but short of both cash and a clear sense of purpose.

The Prime Minister's search for a grand design for his premiership has been restricted by his promise to stick to the Tories' spending targets. So instead he has promised a radical redesign of the political landscape. The next hundred years, Mr Blair told the Labour Party conference, will be a 'century of the radi- cals'. As a first step, he brought the Lib- eral Democrats into a Cabinet committee on the constitution and proclaimed Lloyd George and Keynes as his heroes. Mr Ashdown matched this enthusiasm, telling his own party conference that they must learn to work with Labour. The next logical step would be a formal pact, with each party agreeing to step aside in seats where they came a poor third at the last election.

Both leaders might welcome such an elegant end to the division of Britain's political Left. But last week it became clear that there will be a by-election in Winchester, and a short visit to the city demonstrates that such a pact will not work on the ground. In this civilised cni- cible of middle-English politics, Labour and the Liberals are deeply divided and talk of another Lib-Lab pact seems no more than a Westminster fairytale.

Gerry Malone, the sitting Conservative MP, lost at the election by two votes to the Liberal Democrat Mark Oaten. Labour came third. After a complex argument over a number of disputed ballot papers, the High Court has now ruled that electors must return to the polls for a rerun, proba- bly in early November.

During the case, there had been specula- tion that Labour might withdraw and leave the field clear for the Liberals. In practice, Mr Blair has backed away from such a bold gesture. A senior Labour party source privately confirms that a Labour candidate will stand, 'but will not get any assistance'. Ministerial visits will be kept to a minimum and the Labour hierarchy will implicitly advocate a vote for Mark Oaten. Not fielding a candidate was considered, but ruled out for two reasons. First, it would have been a 'risky thing to do' while the 'relationship with the Liberals is still at an early stage'. Secondly, and most impor- tantly, the local Labour party 'all loathe the Liberals'.

Such loathing is news to the Liberal Democrat candidate Mark Oaten, who warmly endorses Tony Blair. 'The jury was out,' he says admiringly, 'but it is not now. The Prime Minister is a remarkably able man.' The Liberal Democrats and Labour, argues Mr Oaten, are all part of the 'new politics'. Mr Oaten proclaims himself to be '100 per cent behind what Paddy's doing' in getting closer to Labour. He clearly hopes that tacit support from and for the Labour leadership will allow him to bene- fit at the polling booth from the elec- torate's 93 per cent approval rating for Mr Blair.

The Winchester Labour party, howev- er, is the fly in this new political oint- ment. Their candidate in May, Patrick Davies, a Winchester city councillor, expects to be confirmed this week as the by-election contestant. He argues that with a huge Labour majority in Parlia- ment a tactical vote for the Liberals is no longer necessary, and Labour voters will return to the party fold. As for the Liber- als, 'they have this image of being nice people who mean well, but on the ground they are nasty people who don't mean well'. When people vote Liberal, he argues, 'they don't know what they're voting for' because Mr Ashdown's party is 'all over the place, unable to establish a clear line, with chaotic leadership'.

Mr Davies claims that the Liberal chair- man of the local planning committee recently passed an application for a new service station on the M3. He then went to the protest meeting opposing the applica- tion and made a contribution to the fight- ing fund. He wonders whether Mr Ashdown 'knows what his troops up and down the country are like'.

His views are typical of local Labour activists, as well as much of the parlia- mentary Labour party. The Liberal Democrats have a reputation for dirty politics at a local level. They are also known to adapt their message to local interest groups. In Winchester, for exam- ple, Mark Oaten backs fox-hunting and opposes handgun legislation, both con- trary to his party's national policies. His position is likely to be popular locally. Such hypocrisy, allied to Mr Ashdown's assumption of the moral high ground, have made the Liberal Democrats around Britain unpopular with active politicians of all parties.

Mr Ashdown's men have more to gain than Labour from a partnership. Some Lib- eral Democrats have expressed reserva- tions about snuggling up to Labour, and are promising in private to block any deal, using the party's complex federal decision- making apparatus. But this small rebel group would be unlikely to succeed. The Lib Dem leader has managed to convince most of his party that self-interest dictates an alliance with Labour. He points out that a pact may deliver proportional representa- tion and entrench his party as a permanent and serious force in British politics. He personally expects a job in the Labour Cab- inet before the next election, and some of the best-informed in his party believe he will get it.

But, despite Mr Ashdown's fond hopes, the Winchester experience demonstrates that a Lib-Lab pact is a manifest impossi- bility under the current electoral arrange- ments. Local Labour activists will never step aside and leave the Liberals with a clear run. In Winchester, their determina- tion to take on the Liberals could well help the Conservatives win the by-election.

This leaves Mr Blair with three options. He can wait, in the hope that time improves the relations between the two parties, although such a reconciliation seems unlikely. He can call the marriage off, and attempt to establish Labour as the sole home for 21st-century radicals. Or he can try to push through proportional repre- sentation.

Changing the electoral system would emasculate local constituency associations, whose loathing of the Liberals would become irrelevant. It would also give the Liberal Democrats substantially more rep- resentatives, at the expense of both Labour and the Tories. This would make an elec- toral pact more attractive to the parliamen- tary Labour party. Such a fundamental shift in the political picture might allow Mr Blair to forge a real alliance of Britain's radicals. But the Prime Minister would have to sacrifice his own party interests to engineer it.