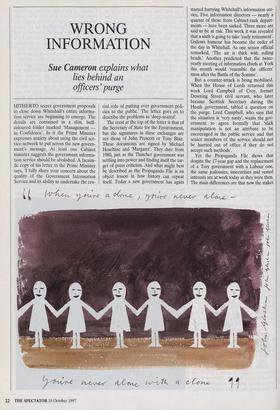 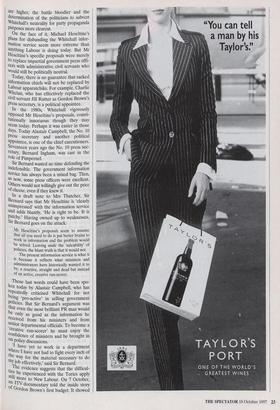 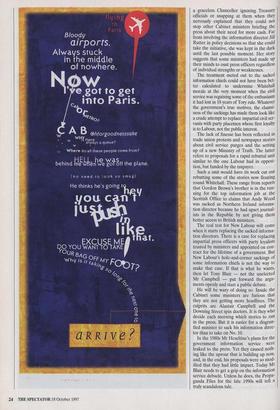 lies behind an officers' purge

HITHERTO secret government proposals to close down Whitehall's entire informa- tion service are beginning to emerge. The details are contained in a slim, buff- coloured folder marked 'Management — in Confidence'. In it the Prime Minister expresses anxiety about using the civil ser- vice network to put across the new govern- ment's message. At least one Cabinet minister suggests the government informa- tion service should be abolished. A facsim- ile copy of his letter to the Prime Minister says, 'I fully share your concern about the quality of the Government Information Service and its ability to undertake the cru- cial role of putting over government poli- cies to the public.' The letter goes on to describe the problems as 'deep-seated'.

The crest at the top of the letter is that of the Secretary of State for the Environment, but the signatures in these exchanges are not those of John Prescott or Tony Blair. These documents are signed by Michael Heseltine and 'Margaret'. They date from 1980, just as the Thatcher government was settling into power and finding itself the tar- get of press criticism. And what might best be described as the Propaganda File is an object lesson in how history can .repeat itself. Today a new government has again started harrying Whitehall's information ser- vice. Five information directors — nearly a quarter of those from Cabinet-rank depart- ments — have been sacked. Three more are said to be at risk. This week it was revealed that a sixth is going to take 'early retirement'. Gallows humour has become the order of the day in Whitehall. As one senior official remarked, The air is thick with rolling heads.' Another predicted that the twice- yearly meeting of information chiefs at York this month would 'resemble the officers' mess after the Battle of the Somme'.

But a counter-attack is being mobilised. When the House of Lords returned this week Lord Campbell of Croy, former Downing Street civil servant, who later became Scottish Secretary during the Heath government, tabled a question on the purge. Lord Campbell, who says that the situation is 'very nasty', wants the gov- ernment to agree formally that 'slick manipulation is not an attribute to be encouraged in the public service and that senior members of the service should not be harried out of office if they do not accept such methods'.

Yet the Propaganda File shows that despite the 17-year gap and the replacement of a Tory government with a Labour one, the same jealousies, insecurities and vested interests are at work today as they were then. The main differences are that now the stakes are higher, the battle bloodier and the determination of the politicians to subvert Whitehall's neutrality for party propaganda Purposes more clearcut.

On the face of it, Michael Hese'tine's Plans for disbanding the Whitehall infor- mation service seem more extreme than anything Labour is doing today. But Mr Heseltine's specific proposals were merely to replace impartial government press offi- cers with administrative civil servants who would still be politically neutral. Today, there is no guarantee that sacked information chiefs will not be replaced by Labour apparatchiks. For example, Charlie Whelan, who has effectively replaced the civil servant Jill Rutter as Gordon Brown's Press secretary, is a political appointee. In the 1980s, Whitehall vigorously oPposed Mr Heseltine's proposals, consti- tutionally innocuous though they may seem today. Perhaps it was easier in those days. Today Alastair Campbell, the No. 10 Press secretary and another political aPPointee, is one of the chief executioners. Seventeen years ago the No. 10 press sec- retary, Bernard Ingham, was cast in the role of Pimpernel. Sir Bernard wasted no time defending the indefensible. The government information service has always been a mixed bag. Then, as now, some press officers were excellent. Others would not willingly give out the price of cheese, even if they knew it. In a draft note to Mrs Thatcher, Sir Bernard says that Mr Heseltine is 'clearly unimpressed with the information service and adds bluntly, 'He is right to be. It is Patchy.' Having owned up to weaknesses, Sir Bernard goes on the attack:

Mr Heseltine's proposals seem to assume that all you need to do is put better brains to Work in information and the problem would be solved. Leaving aside the 'saleability' of Policies, the blunt truth is that it would not.

The present information service is what it Is because it reflects what ministers and administrators have historically wanted it to be: a reactive, straight and dead bat instead of an active, creative run-scorer.

Those last words could have been spo- ken today by Alastair Campbell, who has repeatedly criticised Whitehall for not beuig. 'pro-active' in selling government Policies. But Sir Bernard's argument was that even the most brilliant PR man would be only as good as the information he received from his ministers and from senior departmental officials. To become a creative run-scorer' he must enjoy the confidence of ministers and be brought in en, Policy discussions. I have yet to work in a department where I have not had to fight every inch of the .way for the material necessary to do my job effectively,' said Sir Bernard. The evidence suggests that the difficul- ties he experienced with the Tories apply still more to New Labour. On 7 October, all„ ITV documentary told the inside story 'X Gordon Brown's first budget. It showed a graceless Chancellor ignoring Treasury officials or snapping at them when they nervously explained that they could not stop other Cabinet ministers briefing the press about their need for more cash. Far from involving the information director Jill Rutter in policy decisions so that she could take the initiative, she was kept in the dark until the last possible moment. Her story suggests that some ministers had made up their minds to oust press officers regardless of individual strengths or weaknesses.

The treatment meted out to the sacked information chiefs could not have been bet- ter calculated to undermine Whitehall morale at the very moment when the civil service was regaining some of the enthusiasm it had lost in 18 years of Tory rule. Whatever the government's true motives, the clumsi- ness of the sackings has made them look like a crude attempt to replace impartial civil ser- vants with party placemen whose first loyalty is to Labour, not the public interest.

The lack of finesse has been reflected in trade union protests and newspaper stories about civil service purges and the setting up of a new Ministry of Truth. The latter refers to proposals for a rapid rebuttal unit similar to the one Labour had in opposi- tion, but funded by the taxpayer. Such a unit would have its work cut out rebutting sonic of the stories now floating round Whitehall. These range from reports that Gordon Brown's brother is in the run- ning for the top information job at the Scottish Office to claims that Andy Wood was sacked as Northern Ireland informa- tion director because he had upset journal- ists in the Republic by not giving them better access to British ministers.

The real test for New Labour will come when it starts replacing the sacked informa- tion directors. There is a case for replacing impartial press officers with party loyalists trusted by ministers and appointed on con- tract for the lifetime of a government. But New Labour's hole-and-corner sackings of some information chiefs is not the way to make that case. If that is what he wants, then let Tony Blair — not the unelected Mr Campbell — put forward the argu- ments openly and start a public debate.

He will be waxy of doing so. Inside the Cabinet some ministers are furious that they are not getting more headlines. The culprits are Alastair Campbell and the Downing Street spin doctors. It is they who decide each morning which stories to run in the press. But it is easier for a disgrun- tled minister to sack his information direc- tor than to take on No. 10.

In the 1980s Mr Heseltine's plans for the government information service were leaked to the press. Yet they caused noth- ing like the uproar that is building up now, and, in the end, his proposals were so mod- ified that they had little impact. Today Mr Blair needs to get a grip on the information service debacle. Unless he does, the Propa- ganda Files for the late 1990s will tell truly scandalous tale.