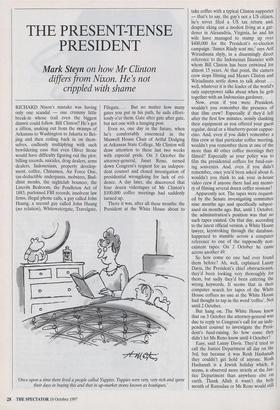 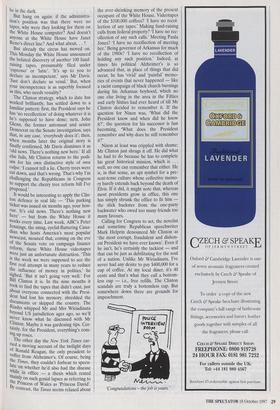 Mark Steyn on how Mr Clinton

differs from Nixon. He's not crippled with shame

RICHARD Nixon's mistake was having only one scandal — one crummy little break-in whose trail even the biggest dimwit could follow. Bill Clinton? He's got a zillion, snaking out from the swamps of Arkansas to Washington to Jakarta to Bei- jing and then coiling back in on them- selves, endlessly multiplying with such bewildering ease that even Oliver Stone would have difficulty figuring out the plot: billing records, suicides, drug dealers, arms dealers, Indonesians, property develop- ment, coffee, Chinamen, Air Force One, tax-deductible underpants, mobsters, Bud- dhist monks, the nightclub bouncer, the Lincoln Bedroom, the Pendleton Act of 1883, purloined FBI records, insolvent law firms, illegal phone calls, a guy called John Huang, a second guy called John Huang (no relation), Whitewatergate, Travelgate, Filegate.. . But no matter how many gates you put in his path, he sails effort- lessly o'er them. Gate after gate after gate, but not one with a hanging post.

Even so, one day in the future, when he's comfortably ensconced in the Maxwell House Chair of Artful Dodging at Arkansas State College, Mr Clinton will draw attention to these last two weeks with especial pride. On 3 October the attorney-general, Janet Reno, turned down Congress's request for an indepen- dent counsel and closed investigation of presidential wrongdoing for lack of evi- dence. A day later, she discovered that four dozen videotapes of Mr Clinton's S100,000 coffee meetings had suddenly turned up.

There it was, after all these months: the President at the White House about to 'Once upon a time there lived a people called Yuppies. Yuppies were very, very rich and spent their days in buying this and that in up-market stores known as boutiques.' take coffee with a typical Clinton supporter — that's to say, the guy's not a US citizen, he's never filed a US tax return and, despite eking out a modest living as a gar- dener in Alexandria, Virginia, he and his wife have managed to stump up over $400,000 for the President's re-election campaign. 'James Riady sent me,' says Arif Wiriadinata shyly, in a disarmingly direct reference to the Indonesian financier with whom Bill Clinton has been entwined for almost 15 years. At that point, the camera crew stops filming and Messrs Clinton and Wiriadinata settle down to talk about . well, whatever it is the leader of the world's only superpower talks about when he gets together with an Indonesian gardener.

Now, even if you were President, wouldn't you remember the presence of that film crew? Especially if they'd left after the first few minutes, noisily clunking their equipment as you offered your guest regular, decaf or a blueberry-pecan cappuc- cino. And, even if you didn't remember a film crew at that particular coffee meeting, wouldn't you remember them at one of the more than 40 other coffee mornings they filmed? Especially as your policy was to film the presidential coffees for fund-rais- ing souvenirs. And, even if you didn't remember, once you'd been asked about it, wouldn't you think to ask your in-house video crew if anyone there had any memo- ry of filming several dozen coffee sessions?

Apparently not. The tapes were request- ed by the Senate investigating committee nine months ago and specifically subpoe- naed six months ago. But, until 1 October, the administration's position was that no such tapes existed. On that day, according to the latest official version, a White House lawyer, keystroking through the database, happened to stumble across a computer reference to one of the supposedly non- existent tapes. On 2 October he came across another 49.

So how come no one had ever found them before? Ah, well, explained Lanny Davis, the President's chief obstructionist, they'd been looking very thoroughly for them, but sadly they'd been entering the wrong keywords. It seems that in their computer search for tapes of the White House coffees no one at the White House had thought to tap in the word 'coffee'. Not until 2 October.

But hang on. The White House knew that on 3 October the attorney-general was due to reply to Congress's call for an inde- pendent counsel to investigate the Presi- dent's fund-raising. So how come they didn't let Ms Reno know until 4 October?

Easy, said Lanny Davis. They'd tried to call the Justice Department all day on the 3rd, but because it was Rosh Hashanah they couldn't get hold of anyone. Rosh Hashanah is a Jewish holiday which, it seems, is observed more strictly at the Jus- tice Department than anywhere else on earth. Thank Allah it wasn't the holy month of Ramadan or Ms Reno would still be in the dark.

But hang on again: if the administra- tion's position was that there were no tapes, why were they looking for them on the White House computer? And doesn't anyone at the White House have Janet Reno's direct line? And what about. . . ?

But already the circus has moved on. This Monday the White House announced the belated discovery of another 100 fund- raising tapes, presumably filed under 'espresso' or 'late'. 'It's up to you to declare us incompetent,' says Mr Davis. 'Just don't declare us venal.' But, when Your incompetence is as superbly focused as this, who needs venality? The Clinton strategy, which to date has worked brilliantly, has settled down to a familiar pattern: first, the President says he has 'no recollection' of doing whatever it is he's supposed to have done; next, John Glenn, the former astronaut and senior Democrat on the Senate investigation, says that, in any case, 'everybody does it'; then, When months later the original story is finally confirmed, Mr Davis dismisses it as 'old news. There's nothing new here.' If all else fails, Mr Clinton returns to the podi- um for his own distinctive style of mea culpa: 'I cannot tell a lie. Cherry trees were cut down, and that's wrong. That's why I'm challenging the Republicans in Congress to support the cherry tree reform bill I've proposed.'

It would be interesting to apply the Clin- ton defence in real life — 'This parking ticket was issued six months ago, your hon- our. It's old news. There's nothing new here' — but from the White House it works every time. Last week, ABC's Peter Jennings, the smug, eyelid-fluttering Cana- dian who hosts America's most popular newscast, moaned that, coming on the eve of the Senate vote on campaign finance reform, these White House videotapes were just an unfortunate distraction. 'This IS the week we were supposed to see the first real attempt in many years to reduce the influence of money in politics,' he sighed. 'But it isn't going very well.' For Bill Clinton it is. In the nine months it took to find the tapes that didn't exist, just about everyone connected with the Presi- dent had lost his memory, shredded the documents or skipped the country. The Riadys whipped Mr and Mrs Wiriadinata beyond US jurisdiction ages ago, so we'll never 'mow what he discussed with Mr Clinton. Maybe it was gardening tips. Cer- tainly, for the President, everything's com- ing up roses. . The other day the New York Times car- ried a moving account of the twilight days of Ronald Reagan, the only president to suffer from Alzheimer's. Of course, being the Times, they couldn't forbear to specu- late on whether he'd also had the disease While in office — a thesis which rested Mainly on such genial lapses as referring to t_tte Princess of Wales as 'Princess David'. bY contrast, the Times seems relaxed about the ever-shrinking memory of the present occupant of the White House. Videotapes of the $100,000 coffees? 'I have no recol- lection of any tapes.' Making fund-raising calls from federal property? 'I have no rec- ollection of any such calls.' Meeting Paula Jones? 'I have no recollection of meeting her.' Being governor of Arkansas for much of the 1980s? 'I have no recollection of holding any such position.' Indeed, at times his political Alzheimer's is so advanced that, in place of things that did occur, he has 'vivid' and 'painful' memo- ries of events that never happened — like a racist campaign of black church burnings during his Arkansas boyhood, which no one else living in the area in the Fifties and early Sixties had ever heard of till Mr Clinton decided to remember it. If the question for Nixon was, 'What did the President know and when did he know it?', the question for his successor is fast becoming, 'What does the President remember and why does he still remember it?'

Nixon at least was crippled with shame; Mr Clinton just shrugs it off. He did what he had to do because he has to complete his great historical mission, which is . . . well, no one can remember that either. He is, in that sense, an apt symbol for a pre- sent-tense culture whose collective memo- ry barely extends back beyond the death of Elvis. If it did, it might note that, whereas most presidents grow in office, this one has simply shrunk the office to fit him — the slick huckster from the one-party backwater who owed too many friends too many favours.

Calling for Congress to act, the novelist and sometime Republican speechwriter Mark Helprin denounced Mr Clinton as 'the most corrupt, fraudulent and dishon- est President we have ever known'. Even if he isn't, he's certainly the tackiest — and that can be just as debilitating for the soul of a nation. Unlike Mr Wiriadinata, I've never had any desire to pay $400,000 for a cup of coffee. At my local diner, it's 40 cents and that's what they call a bottom- less cup — i.e., free refills. The Clinton scandals are truly a bottomless cup. But somewhere down there are grounds for impeachment.

'Congratulations — the job is yours.'