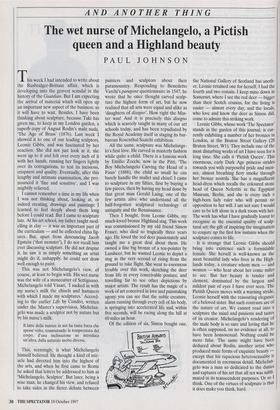 The wet nurse of Michelangelo, a Pictish queen and a Highland beauty

This week I had intended to write about the Rusbridger-Brittain affair, which is developing into the gravest scandal in the history of the Guardian. But I am expecting the arrival of material which will open up an important new aspect of the business, so it will have to wait. Besides, I have been thinking about sculpture, because Taki has given me, to keep in my London garden, a superb copy of August Rodin's male nude, 'The Age of Brass' (1876). Last week I showed it to one of our leading sculptors, Leonie Gibbs, and was fascinated by her reaction. She did not just look at it, she went up to it and felt over every inch of it with her hands, running her fingers lightly over its corrugations, to test its incisions, crispness and quality. Eventually, after this lengthy and intimate examination, she pro- nounced it 'fine and sensitive', and I was mightily relieved.

I cannot remember a time in my life when I was not thinking about, looking at, or indeed creating, drawings and paintings: I learned to feel deeply about them long before I could read. But I came to sculpture late. At his art school, my father taught mod- elling in clay — it was an important part of the curriculum — and he collected china fig- ures. But, apart from denouncing Jacob Epstein ('that monster'), I do not recall him ever discussing sculpture. He did not despise it, he saw it as simply something an artist might do if, unhappily, he could not draw well enough to paint.

This was not Michelangelo's view, of course, at least to begin with. His wet nurse was the wife of a stonecutter of Settignano. Michelangelo told Vasari, 'I sucked in with my nurse's milk the chisels and hammers with which I made my sculptures.' Accord- ing to the earlier Life by Condivi, written under the Master's supervision, Michelan- gelo was made a sculptor not by nature but by his nurse's milk:

This, seemingly, is what Michelangelo himself believed. He thought a kind of mir- acle had directed him into the highest of the arts, and when he first came to Rome he asked that letters be addressed to him as 'Michelangelo, Sculptor', But later, being a wise man, he changed his view, and refused to take sides in the fierce debate between painters and sculptors about their paramountcy. Responding to Benedetto Varchi's paragone questionnaire in 1547, he wrote that he once thought carved sculp- ture the highest form of art, but he now realised that all arts were equal and alike as 'daughters of disegno'. How right the Mas- ter was! And it is precisely this disegno which is scarcely taught in many of our art schools today, and has been repudiated by the Royal Academy itself in staging its bar- barous Rosenthal/Saatchi exhibition.

All the same, sculpture was Michelange- lo's first love. He carved in masterly fashion while quite a child. There is a famous work by Emilio Zocchi, now in the Pitti, 'The Boy Michelangelo Carving the Head of a Faun' (1888), the child so small he can barely handle the mallet and chisel'. I came to sculpture in my fifties, first by buying a few pieces, then by having my head done by that great man Gerald Laing, one of the few artists alive who understand all the half-forgotten sculptural technology of antiquity and the Renaissance.

Then I bought, from Leonie Gibbs, my much-loved bronze Highland stag. This work was commissioned by my old friend Simon Fraser, who died so tragically three years ago. He loved the red deer passionately and taught me a great deal about them. He owned a fine big bronze of a ten-pointer by Landseer, but he wanted Leonie to depict a stag in the very second of rising from the ground to take flight. She went to enormous trouble over this work, sketching the deer from life in every conceivable posture, and travelling far to see other depictions by major artists. The result has the magic of a work of art conceived in love and painstaking agony: you can see that the noble creature, alarm running through every cell of his body, is springing into accelerated life and, within five seconds, will be racing along the hill at 60 miles an hour.

Of the edition of six, Simon bought one, the National Gallery of Scotland has anoth- er, Leonie retained one for herself, I had the fourth and two remain. I keep mine down in Somerset, where I see the red deer — bigger than their Scotch cousins, for the living is easier — almost every day, and the locals, who love and know the deer as Simon did, come to admire this striking work.

Leonie Gibbs, whose work 'The Spectator' stands in the garden of this journal, is cur- rently exhibiting a number of her bronzes in London, at the Bruton Street Gallery (28 Bruton Street, W1). They include one of the most disturbing works of art I have seen for a long time. She calls it 'Pictish Queen'. This enormous, early Dark Age princess strides towards you with purposeful pride and men- ace, almost breathing fiery smoke through her bronze nostrils. She has a magnificent head-dress which recalls the coloured stone head of Queen Nefertiti in the Egyptian Museum, Berlin, and she is every inch a high-born lady ruler who will permit no opposition to her will. I am not sure I would care to be left alone in a dark room with her. The work has what I have gradually learnt to recognise as the essential quality of sculp- tural art: the gift of inspiring the imagination to conjure up the first few instants when the sculpture comes to life. It is strange that Leonie Gibbs should bring into existence such a formidable female. She herself is well-known as the most beautiful lady who lives in the High- lands today, a creature whom men — and women — who hear about her come miles to see. But her beauty is tender and clement, dominated by the largest and mildest pair of eyes I have ever seen. The Pictish Queen moves with a warning stride, Leonie herself with the reassuring elegance of a beloved sister. But such contrasts are of the nature of art. We cannot read into a sculpture the mind and passions and tastes of its creator. Michelangelo's rendering of the male body is so sure and loving that he is often supposed, on no evidence at all, to have been homosexual. Nothing could be more false. The same might have been deduced about Rodin, another artist who produced male forms of exquisite beauty — except that his rapacious heterosexuality is documented in enormous detail. Michelan- gelo was a man so dedicated to the duties and raptures of his art that all sex was subli- mated in its transcendent purposes. Or so I think. One of the virtues of sculpture is that it does make you think, hard.