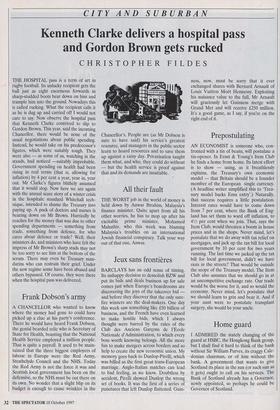 A CHANCELLOR who wanted to know where the money had gone to could have picked up a clue at his party's conference. There he would have heard Frank Dobson, the genial bearded relic who is Secretary of State for Health, boasting that the National Health Service employed a million people. That is quite a payroll. It used to be main- tained that the three biggest employers of labour in Europe were the Red Army, Strathclyde Council and the NHS. Today the Red Army is not the force it was and Scottish local government has been on the defensive, so the NHS must be out there on its own. No wonder that a slight blip on its budget is enough to cause wrinkles in the Chancellor's. People are (as Mr Dobson is sure to have said) his service's greatest resource, and managers in the public sector learn to hoard resources and to save them up against a rainy day. Privatisation taught them what, and who, they could do without — but the health service is proof against that and its demands are insatiable.