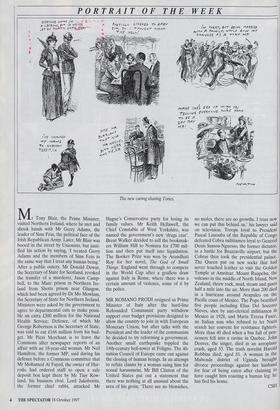 PORTRAIT OF THE WEEK The new caring sharing Tories.

Mr Tony Blair, the Prime Minister, visited Northern Ireland, where he met and shook hands with Mr Gerry Adams, the leader of Sinn Fein, the political face of the Irish Republican Army. Later, Mr Blair was booed in the street by Unionists, but justi- fied his action by saying, 'I treated Gerry Adams and the members of Sinn Fein in the same way that I treat any human being.' After a public outcry, Mr Donald Dewar, the Secretary of State for Scotland, revoked the transfer of a murderer, Jason Camp- bell, to the Maze prison in Northern Ire- land from Shotts prison near Glasgow, which had been agreed by Dr Mo Mowlam, the Secretary of State for Northern Ireland. Ministers were asked by the government to agree to departmental cuts to make possi- ble an extra 1300 million for the National Health Service; Defence, of which Mr George Robertson is the Secretary of State, was told to cut £168 million from his bud- get. Mr Piers Merchant is to leave the Commons after newspaper reports of an affair with an 18-year-old woman. Mr Neil Hamilton, the former MP, said during his defence before a Commons committee that Mr Mohamed Al Fayed, the owner of Har- rods, had ordered staff to open a safe deposit box kept there by Mr Tiny Row- land, his business rival. Lord Jakobovits, the former chief rabbi, attacked Mr Hague's Conservative party for losing its family values. Mr Keith Hellawell, the Chief Constable of West Yorkshire, was named the government's new 'drugs czar'. Brent Walker decided to sell the bookmak- ers William Hill to Nomura for E700 mil- lion and then put itself into liquidation. The Booker Prize was won by Arundhati Roy for her novel, The God of Small Things. England went through to compete in the World Cup after a goalless draw against Italy in Rome, where there was a certain amount of violence, some of it by the police.

MR ROMANO PRODI resigned as Prime Minister of Italy after the hard-line Refounded Communist party withdrew support over budget provisions designed to allow the country to join in with European Monetary Union; but after talks with the President and the leader of the communists he decided to try reforming a government. Another small earthquake toppled the 14th-century bell-tower at Foligno. The 40- nation Council of Europe came out against the cloning of human beings. In an attempt to refute claims by a woman suing him for sexual harassme'nt, Mr Bill Clinton of the United States put out a statement that there was nothing at all unusual about the area of his groin; 'There are no blemishes, no moles, there are no growths. I trust novV we can put this behind us,' his lawyer said on television. Troops loyal to President Pascal Lissouba of the Republic of Congo defeated Cobra militiamen loyal to General Denis Sassou-Nguesso, the former dictator, in a battle for Brazzaville airport; but the Cobras then took the presidential palace. The Queen put on new socks that had never touched leather to visit the Golden Temple at Amritsar. Mount Ruapehu, the volcano in the middle of North Island, New Zealand, threw rock, mud, steam and gases half a mile into the air. More than 200 died in a hurricane around Acapulco on the Pacific coast of Mexico. The Pope beatified five people including Elias Del Soccoro Nieves, shot by anti-clerical militiamen in Mexico in 1928, and Maria Teresa Fasce, an Italian nun who refused to let Nazis search her convent for resistance fighters. More than 40 died when a bus full of pen- sioners fell into a ravine in Quebec. John Denver, the singer, died in an aeroplane crash, aged 53. The trash novelist Harold Robbins died, aged 81. A woman in the Mubende district of Uganda brought divorce proceedings against her husband for fear of being eaten after claiming to have caught him roasting a human leg; he has fled his home.