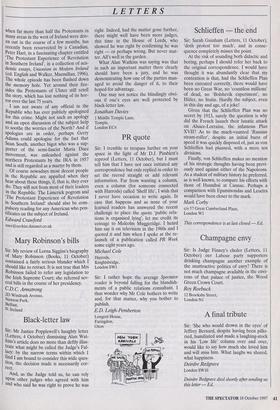 Sir: I tremble to trespass further on your space in the light of Mr D.J. Pimblett's reproof (Letters, 11 October), but I must tell him that I have not once initiated any correspondence but only replied in order to set the record straight or add relevant information. Far from wanting a column, even a column (for someone connected with Harrods) called `Shelf life', I wish that I never have occasion to write again. In case that happens and as none of your learned readers has answered the recent challenge to place the quote 'public rela- tions is organised lying', let me credit its coinage to Malcolm Muggeridge. I heard him say it on television in the 1960s and I quoted it and him when I spoke at the re- launch of a publication called PR Week some eight years ago.