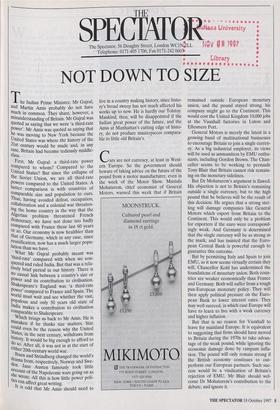 NOT DOWN TO SIZE

ala The Indian Prime Minister, Mr Gujral, and Martin Amis probably do not have much in common. They share, however, a misunderstanding of Britain. Mr Gujral was quoted as saying that we were 'a third-rate Power'. Mr Amis was quoted as saying that he was moving to New York because the United States was where the history of the 21st century would be made and, in any case, Britain had become tediously middle- class.

First, Mr Gujral: a third-rate power compared to whom? Compared to the United States? But since the collapse of the Soviet Union, we are all third-rate Powers compared to the United States. A better comparison is with countries of comparable size and population to ours. Thus, having avoided defeat, occupation, collaboration and a colonial war threaten- ing the home country in the way that the Algerian problem threatened French democracy, we have not done too badly compared with France these last 60 years or so. Our economy is now healthier than that of Germany, which in any case, since reunification, now has a much larger popu- lation than we have. , W. hat Mr Gujral probably meant was What compared with when we con- Tiered and ruled India. But that was a rela- tively brief period in our history. There is no causal link between a country's size or Power and its contribution to civilisation. Shakespeare's England was 'a third-rate Power' compared to France and Spain. The world must wait and see whether the vast, Populous and only 50 years old state of India makes a contribution to civilisation comparable to Shakespeare. Which brings us back to Mr Amis. He is mistaken if he thinks size matters. Size c_ould even be the reason why the United .States, in the next century, withdraws from ti,istory. It would be big enough to afford to a9 so. After all, it was not in at the start of either 20th-century world war. _ Ibsen and Strindberg changed the world's drama from, respectively, Norway and Swe- den. Jane Austen famously took little account of the Napoleonic wars going on as s ,ae wrote. All this is how little power poli- ucs can affect great writing. It is odd that Mr Amis should need to live in a country making history, since histo- ry's broad sweep has not much affected his works up to now. He is hardly our Tolstoy. Mankind, then, will be disappointed if the Indian great power of the future, and the Amis at Manhattan's cutting edge of histo- ry, do not produce masterpieces compara- ble to little old Britain's.

Cars are not currency, at least in West- ern Europe. So the government should beware of taking advice on the future of the pound from a motor manufacturer, even in the week of the Motor Show. Mustafa Mohatarem, chief economist of General Motors, warned this week that if Britain remained outside European monetary union, and the pound stayed strong, his company might go to the Continent. This would cost the United Kingdom 10,000 jobs at the Vauxhall factories in Luton and Ellesmere Port.

General Motors is merely the latest in a growing band of multinational businesses to encourage Britain to join a single curren- cy. As a big industrial employer, its views will be used as ammunition by EMU enthu- siasts, including Gordon Brown. The Chan- cellor seems to be working to persuade Tony Blair that Britain cannot risk remain- ing on the monetary sidelines.

But Dr Mohatarem's argument is flawed. His objection is not to Britain's remaining outside a single currency, but to the high pound that he believes will be the result of this decision. He argues that a strong ster- ling will damage companies like General Motors which export from Britain to the Continent. This would only be a problem for exporters if the euro were correspond- ingly weak. And Germany is determined that the single currency will be as strong as the mark, and has insisted that the Euro- pean Central Bank is powerful enough to guarantee this outcome.

But by permitting Italy and Spain to join EMU, as it now seems virtually certain they will, Chancellor Kohl has undermined the foundations of monetary union. Both coun- tries are weaker economically than France and Germany. Both will suffer from a tough pan-European monetary policy. They will then apply political pressure on the Euro- pean Bank to lower interest rates. They may well succeed, in which case Europe will have to learn to live with a weak currency and higher inflation.

But that is no reason for Vauxhall to leave for mainland Europe. It is equivalent to suggesting that firms should have moved to Britain during the 1970s to take advan- tage of the weak pound, while ignoring the economic damage done by rampant infla- tion. The pound will only remain strong if the British economy continues to out- perform our European partners. Such suc- cess would be a vindication of Britain's rejection of EMU. Mr Blair should wel- come Dr Mohatarem's contribution to the debate, and ignore it.