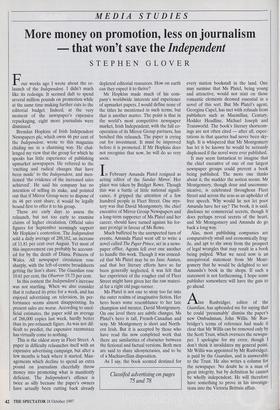 — that won't save the Independent

Four weeks ago I wrote about the re- launch of the Independent. I didn't much like its redesign. It seemed daft to spend several million pounds on promotion while at the same time making further cuts to the editorial budget. Indeed, at the very moment of the newspaper's expensive repackaging, eight more journalists were dismissed.

Brendan Hopkins of Irish Independent Newspapers plc, which owns 46 per cent of the Independent, wrote to this magazine chiding me in a charming way. He chal- lenged my view that the group for which he speaks has little experience of publishing upmarket newspapers. He referred to the 'exciting and radical changes that have been made' to the Independent, and men- tioned the evidence of the increased sales achieved'. He said his company has no intention of selling its stake, and pointed out that if Mirror Group were to dispose of its 46 per cent share, it would be legally bound first to offer it to his group.

These are early days to assess the relaunch, but not too early to examine claims of higher circulation. Official sales figures for September seemingly support Mr Hopkins's contention. The Independent sold a daily average of 288,182, an increase of 11.81 per cent over August. Yet most of this improvement can probably be account- ed for by the death of Diana, Princess of Wales. All newspaper circulation rose sharply, with the left-of-centre broadsheets getting the lion's share. The Guardian rose 10.61 per cent, the Observer 19.73 per cent.

In this context the Independent's increase was not startling. When we also consider that it reduced its price for a week, and has enjoyed advertising on television, its per- formance seems almost disappointing. Its present sales are worse. According to unof- ficial estimates, the paper sold an average of 266,000 copies last week, hardly better than its pre-relaunch figure. As was not dif- ficult to predict, the expensive razzmatazz has virtually come to nothing.

This is the oldest story in Fleet Street. A paper in difficulty relaunches itself with an expensive advertising campaign, but after a few months is back where it started. Man- agements which decline to spend an extra pound on journalism cheerfully throw money into promoting what is manifestly deficient. The Independent's offence is twice as silly because the paper's owners have actually been cutting back already

depleted editorial resources. How on earth can they expect it to thrive?

Mr Hopkins made much of his com- pany's worldwide interests and experience of upmarket papers. I would define none of the titles he mentioned in such terms, but that is another matter. The point is that in the world's most competitive newspaper market, Irish Independent, with the full co- operation of its Mirror Group partners, has botched this relaunch. The paper is crying out for investment. It must be improved before it is promoted. If Mr Hopkins does not recognise that now, he will do so very soon.

n February Amanda Platel resigned as acting editor of the Sunday Mirror. Her place was taken by Bridget Rowe. Though this was a battle of little national signifi- cance, it gripped the attention of a few hundred people in Fleet Street. One mys- tery was that David Montgomery, the chief executive of Mirror Group Newspapers and a long-term supporter of Ms Platel and her career, should have turned against his for- mer protégé in favour of Ms Rowe.

Much buffeted by the unexpected turn of events, Amanda Platel went off to write a novel called The Paper Prince, set in a news- paper office. Agents fell over one another to handle this work. Though it was conced- ed that Ms Platel may be no Jane Austen, and that her literary efforts have so far been generally neglected, it was felt that her experience of the rougher end of Fleet Street might have given her the raw materi- al for a right old page-turner.

Ms Platel is not one to stray too far into the outer realms of imaginative fiction. Her hero bears some resemblance to her late champion and mentor, David Montgomery. On one level there are subtle changes. Ms Platel's hero is tall, French-Canadian and sexy. Mr Montgomery is short and North- ern Irish. But it is accepted by those who have read the now completed work that there are similarities of character between the fictional and factual versions. Both men are said to share idiosyncrasies, and to be of a Machiavellian disposition.

As I say, the book seemed destined for every station bookstall in the land. One may surmise that Ms Platel, being young and attractive, would not stint on those romantic elements deemed essential in a novel of this sort. But Ms Platel's agent, Georgina Capel, has met with refusals from publishers such as Macmillan. Century, Hodder Headline, Michael Joseph and Transworld. The book's literary shortcom- ings are not often cited — after all, expec- tations in that quarter had never been sky- high. It is whispered that Mr Montgomery has let it be known he would be seriously displeased if the novel were ever published.

It may seem fantastical to imagine that the chief executive of one of our largest newspaper groups could prevent a book being published. The more one thinks about it, the madder the notion seems. Mr Montgomery, though dour and uncommu- nicative, is celebrated throughout Fleet Street and across the seas as an upholder of free speech. Why would he not let poor Amanda have her say? The book, it is said, discloses no commercial secrets, though it does perhaps reveal secrets of the heart, and Mr Montgomery and Amanda do go back a long way.

Alas, most publishing companies are comparatively small and economically frag- ile, and apt to shy away from the prospect of legal wrangles that may result in a book being pulped. What we need now is an unequivocal statement from Mr Mont- gomery that he would be delighted to see Amanda's book in the shops. If such a statement is not forthcoming, I hope some publisher somewhere will have the guts to go ahead.

Aan Rusbridger, editor of the Guardian, has upbraided me for saying that he could 'presumably' dismiss the paper's new Ombudsman, John Willis. Mr Rus- bridger's terms of reference had made it clear that Mr Willis can be removed only by the Scott Trust, which oversees the newspa- per. I apologise for my error, though I don't think it invalidates my general point. Mr Willis was appointed by Mr Rusbridger, is paid by the Guardian, and is answerable to the Trust. He also writes a column for the newspaper. No doubt he is a man of great integrity, but by definition he cannot be wholly independent. He will therefore have something to prove in his investiga- tions into the Victoria Brittain affair.