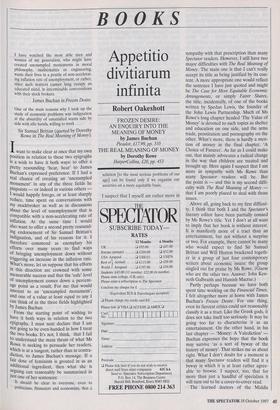 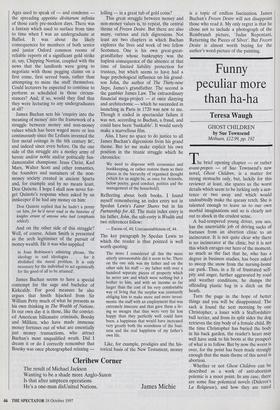 I have watched the most able men and women of my generation, who might have created unexampled monuments in moral philosophy, mathematics or engineering, waste their lives in a prattle of non-accelerat- ing inflation rate of unemployment, or rather, since such matters cannot long occupy an educated mind, in interminable conversations With their stock brokers.

One of the main reasons why I took up the study of economic problems was indignation at the absurdity of unsatisfied wants side by side with idle hands, willing to work .. .

Sir Samuel Brittan (quoted by Dorothy Rowe in The Real Meaning of Money).

want to make clear at once that my own position in relation to these two epigraphs Is a wish to have it both ways: to offer a pretty resounding 'hear, hear' to James Buchan's expressed preference. If I had a real chance of creating an 'unexampled Monument' in any of the three fields he pinpoints or indeed in various others ___ I would happily forego, or at least sharply reduce, time spent on conversations with my stockbroker as well as in discussions about the level of unemployment that is Compatible with a non-accelerating rate of Inflation. At the same time J would also want to offer a second pretty resound- Mg endorsement of Sir Samuel Brittan's indignation, and of his reasons for it. 1 therefore commend as exemplary his efforts over many years to find ways of bringing unemployment down without triggering an increase in the inflation rate. What's more, let us suppose that his efforts M this direction are crowned with some Measurable success and that the 'safe' level of unemployment comes down a percent- age point as a result. For me that would amount to an 'unexampled monument', and one of a value at least equal to any I can think of in the three fields highlighted by James Buchan.

From the starting point of wishing to have it both ways in relation to the two epigraphs, I must next declare that I am not going to be even-handed in how I treat the two books. It's not, I think, that I fail to understand the main thrust of what Ms Rowe is seeking to persuade her readers, Which is at a tangent, rather than in contra- diFtion, to James Buchan's message. If a fair .dose of feminism is grouted in as an additional ingredient, then what she is arguing can reasonably be summarised in JUSt one of her sentences:

It should be clear to everyone, even to Politicians, financiers and economists, that a solution [to the most serious problems of our age] can be found only if we organise our societies on a more equitable basis.

I suspect that I myself am rather more in sympathy with that prescription than many Spectator readers. However, I still have two major difficulties with The Real Meaning of Money. The main one is that I can't really accept its title as being justified by its con- tent. A more appropriate one would reflect the sentence I have just quoted and might be The Case for More Equitable Economic Arrangements, or simply Fairer Shares, the title, incidentally, of one of the books written by Spedan Lewis, the founder of the John Lewis Partnership. Much of Ms Rowe's long chapter headed 'The Value of Money' is devoted to such topics as shelter and education on one side, and the arms trade, prostitution and pornography on the other. What's more, there is hardly a men- tion of money in the final chapter, 'A Choice of Futures'. As far as I could make out, that mainly advocates a radical change in the way that children are treated and brought up. Here again I suspect that I am more in sympathy with Ms Rowe than many Spectator readers will be. But the point is — and this is my second diffi- culty with The Real Meaning of Money — that I am poorly placed to deal with those issues.

Above all, going back to my first difficul- ty, I think that both I and the Spectator's literary editor have been partially conned by Ms Rowe's title. Yet I don't at all want to imply that her book is without interest. It is manifestly more of a tract than an entertainment, but not without a surprise or two. For example, there cannot be many who would expect to find Sir Samuel Brittan and Will Hutton bracketed togeth- er in a group of just four contemporary writers about economic issues: the group singled out for praise by Ms Rowe. (Guess who are the other two. Answer: John Ken- neth Galbraith and Hamish Macrae.) Partly perhaps because we have both spent time working on the Financial Times, I felt altogether more at home with James Buchan's Frozen Desire. For one thing, even its fiercest critics could not reasonably classify it as a tract. Like the Greek gods, it does not take itself too seriously. It may be going too far to characterise it as an entertainment. On the other hand, in his last chapter — 'Money: A Valediction' -- Buchan expresses the hope that the book may survive 'as a sort of byway of the history of money'. That strikes me as about right. What I don't doubt for a moment is that many Spectator readers will find it a byway in which it is at least rather agree- able to browse. I suspect, too, that for more than just a handful of specialists it will turn out to be a cover-to-cover read.

The learned doctors of the Middle Ages used to speak of — and condemn — the spreading appetitio divitiarum infinita of those early pre-modern days. There was a fantasy which used to surface from time to time when I was an undergraduate at Balliol. It was about the likely consequences for members of both senior and junior Oxford common rooms of reliable reports of a significant gold strike at, say, Chipping Norton, coupled with the news that the landlords were going to negotiate with those pegging claims on a first come, first served basis, rather than attempting to mine the stuff themselves. Could lecturers be expected to continue to perform as scheduled in those circum- stances? And, if so, would they find that they were lecturing to any undergraduates at all?

James Buchan sets his 'enquiry into the meaning of money' into the framework of a struggle between money and non-money values which has been waged more or less continuously since the Lydians invented the first metal coinage in the 6th century BC, and indeed since even before. On the one side of this struggle are a motley army of heroic and/or noble and/or politically fun- damentalist champions: Jesus Christ, Karl Marx, Walter Scott and other romantics, the founders and sustainers of the non- money society created in ancient Sparta and, for example and by no means least, Don Quixote. I hope I shall now never for- get Quixote's response when asked by an innkeeper if he had any money on him: Don Quixote replied that he hadn't a penny on him, for he'd never read in the histories of knights etrant of anyone who had (emphasis added).

And on the other side of this struggle? Well, of course, Adam Smith is presented as the arch legitimiser of the pursuit of money wealth. He it was who supplied

in Joan Robinson's admiring phrase, 'the ideology to end ideologies . . for it abolished the moral problem. It is only necessary for the individual to act egoistically for the good of all to be attained',

James Buchan seems to have a special contempt for the sage and bachelor of Kirkcaldy. For good measure he also argues that Smith hijacked from Sir William Petty much of what he presents as his own thinking in The Wealth of Nations. In our own day it is those, like the convict- ed American billionaire criminals, Boesky and Miliken, who have made immense money fortunes out of what are essentially just money transactions, who attract Buchan's most unqualified wrath. Did I dream it or do I correctly remember that Boesky was once photographed relaxing — lolling — in a great tub of gold coins?

This great struggle between money and non-money values is, to repeat, the central theme of Frozen Desire. But there are also many, various and rich digressions. Not least are two chapters in which Buchan explores the lives and work of two fellow Scotsmen. One is his own great-great- grandfather whose bankruptcy was the hapless consequence of the absence at that time of limited liability protection for trustees, but which seems to have had a huge psychological influence on his grand- son John, the author of The Thirty-nine Steps, James's grandfather. The second is the gambler James Law. The extraordinary financial mega-project — at once dizzying and architectonic — which he succeeded in launching in Paris in 1720 was new to me. Though it ended in spectacular failure it was not, according to Buchan, a fraud, and could have been 'bankable'. It would surely make a marvellous film.

Alas, I have no space to do justice to all James Buchan's digressions from his grand theme. But let me make explicit his own position in the titanic struggle which he chronicles:

We need to dispense with economics and bookkeeping, or rather restore them to their places in the hierarchy of organised thought (which for us might be, as once for Aristotle, below poetry, good conduct, politics and the management of the household).

Reflecting about both books, I found myself remembering an index entry not in Spedan Lewis's Fairer Shares but in his Partnership for All. The main index entry is his father, John, the sub-entry is Wealth and two references follow: — Excess of, 44; Unreasonableness of, 44.

The key paragraph by Spedan Lewis to which the reader is thus pointed is well worth quoting:

The more I considered a,11 this the more utterly unreasonable did it seem to be. There on the one side was my father and on the other side his staff — my father with over a hundred separate pieces of property which he never saw and which were nothing but a bother to him, and with an income so far larger than the cost of his very comfortable way of living that the surplus was constantly obliging him to make more and more invest- ments: the staff with an employment that was extremely insecure and that gave them a liv- ing so meagre that they were very far less happy than they perfectly well could have been, a happiness that would have increased very greatly both the soundness of the busi- ness and the real happiness of my father's own life.

Like, for example, prodigies and the his- torical basis of the New Testament, money is a topic of endless fascination. James Buchan's Frozen Desire will not disappoint those who read it. My only regret is that he chose not to include a photograph of the Rembrandt picture, 'Judas Repentant, Returning the Pieces of Silver'. But Frozen Desire is almost worth buying for the author's word-picture of the painting.