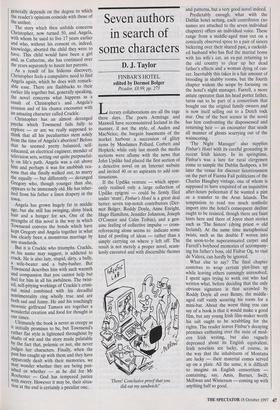 Seven authors in search of some characters

D. J. Taylor • F1NBAR'S HOTEL edited by Dermot Bolger Picador, £8.99, pp. 273 Literary collaborations are all the rage these days. The poets Armitage and Maxwell have reconnointred Iceland in the manner, if not the style, of Auden and MacNeice; the bargain basements of the market harbour a succession of glitzy items by Mesdames Pollard, Corbett and Hopkirk; while only last month the media sections were aflame with the news that John Updike had placed the first section of a detective novel on an Internet website and invited 40 or so aspirants to add con- tinuations.

If the Updike venture — which appar- ently realised only a large collection of Updike epigoni — could be firmly filed under 'stunt', Finbar's Hotel is a great deal better; seven top-notch contributors (Der- mot Bolger, Roddy Doyle, Anne Enright, Hugo Hamilton, Jennifer Johnston, Joseph O'Connor and Cohn Toibin), and a gen- uine feeling of collective impulse — cross- referencing alone seems to indicate some kind of pooling of ideas — rather than x simply carrying on where y left off. The result is not merely a proper novel, seam- lessly executed and with discernible themes 'There! Conclusive proof that you did eat my sandwich!' and patterns, but a very good novel indeed.

Predictably enough, what with the Dublin hotel setting, each contributor (no names are attached to the seven individual chapters) offers an individual voice. These range from a middle-aged man out on a comically observed spree to a pair of sisters bickering over their shared past, a cuckold- ed husband who has fled the marital home with his wife's cat, an ex-pat returning to the old country to clear up her dead father's effects and a woman dying of can- cer. Inevitably this takes in a fair amount of brooding in shabby rooms, but the fourth chapter widens the scope by focusing on the hotel's night manager. Farrell, a more astute operator than his head porter father, turns out to be part of a consortium that bought out the original family owners and is now itself selling out to a Dutch rock star. One of the best scenes in the novel has him confronting the dispossessed and returning heir — an encounter that sends all manner of ghosts scurrying out of the wainscoting.

'The Night Manager' also supplies Finbar's Hotel with its careful grounding in recent Irish history. In its springtime, Finbar's was a lure for rural clergymen come to sample the Dublin fleshpots, a bit later the venue for discreet licentiousness on the part of Fianna Fail politicians of the Charles Haughey vintage, one of whom is supposed to have enquired of an inquisitive after-hours policeman if he wanted a pint or a transfer to the Aran Islands. The temptation to read too much symbolic import into the hotel's consequent decline ought to be resisted, though there are faint hints here and there of Joyce short stories such as 'The Sisters' (dying priest = old Ireland). At the same time metaphorical twists, such as the double F woven into the soon-to-be superannuated carpet and Farrell's boyhood memories of accompany- ing his father's boss, old Finbar Og, to visit de Valera, can hardly be ignored.

What else to say? The final chapter contrives to wrap certain plot-lines up while leaving others cunningly unresolved. I spent ages trying to work out who had written what, before deciding that the only obvious signature is that scrawled by Roddy Doyle all over Benny, the middle- aged raff vainly scouring his room for a mini-bar. About the worst thing you can say of a book is that it would make a good film, but any young Irish film-maker worth his salt ought to be scrabbling for the rights. The reader leaves Finbar's decaying premises enthusing over the state of mod- ern Irish writing, but also vaguely depressed about its English equivalent. Irish novelists are lucky, of course, in the way that the inhabitants of Montana are lucky — their material comes served up on a plate. All the same, it is difficult to imagine an English consortium — containing, say, Anus, Barnes, Swift, McEwan and Winterson — coming up with anything half so good.