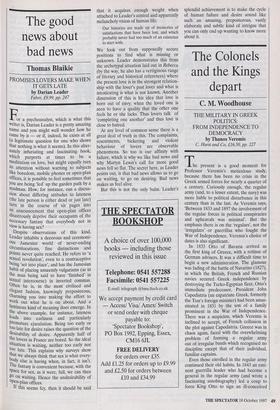 The good news about bad news

PROMISES LOVERS MAKE WHEN IT GETS LATE by Darian Leader Faber, £9.99, pp. 247 F. or a psychoanalyst, which is what this writer is, Darian Leader is a pretty amazing name and you might well wonder how he came by it — or if, indeed, he exists at all (a legitimate question for one who shows that nothing is what it seems). In this alter- nately infuriating and fascinating book, which purports at times to be a meditation on love, but might equally turn its attention without warning to subjects like boredom, mobile phones or open-plan offices, it is possible to feel sometimes that You are being led' up the garden path by a madman. How, for instance, can a discus- sion about differing attitudes to lateness (the late person is either dead or just late) turn in the course of six pages into an announcement that open-plan offices disastrously deprive their occupants of the necessary fantasy that everybody not in view is having sex? Despite observations of this kind, Leader inhabits a decorous and ceremoni- ous Jamesian world of never-ending circumlocutions, fine distinctions and Points never quite reached. He refers to 'a sexual revolution', even to a contraceptive being 'set into place', and has the Jamesian habit of placing unseemly vulgarisms (as in the man being said to have 'finished' in sexual intercourse) in inverted commas. Often he is, in the most civilised and elegant fashion, knowingly preposterous. Charming you into making the effort to work out what he is on about. And a luminous kind of meaning does emerge. In the above example, for instance, lateness leads into earliness and particularly Premature ejaculation. Being too early or too late for desire raises the question of the desirability of desire. Apparently half of the lovers in France are bored. So the ideal situation is waiting, neither too early nor too late. This explains why surveys show that we always think that sex is what every- ......bodY else is having when, in fact, it isn't. li rie fantasy is convenient because, with the space for sex, as it were, full, we can then go on waiting. Hence the undesirability of °Pen-plan offices. If this seems fey, then it should be said that it acquires enough weight when attached to Leader's central and apparently melancholy vision of human life:

Our histories are made up of memories of satisfactions that have been lost, and which probably never had too much of an existence to start with.

We look out from supposedly secure positions to find what is missing or unknown. Leader demonstrates this from the archetypal situation laid out in Rebecca (by the way, he also has a vertiginous range of literary and historical references) where the present love is in the strongest relation- ship with the lover's past lover and what is intoxicating is what is not known. Another dimension of this is his idea that love is born out of envy; when the loved one is seen to have a quality that the other one feels he or she lacks. Thus lovers talk of 'completing one another' and thus love is close to hatred.

At any level of common sense there is a great deal of truth in this. The complaints, resentments, bickering and violent behaviour of lovers are observable phenomena. So too is our affinity with failure, which is why we like bad news and why Martyn Lewis's call for more good news fell so flat. The secret here, as Leader points out, is that bad news allows us to go on waiting, to go on desiring. Bad news makes us feel alive.

But this is not the only balm. Leader's splendid achievement is to make the cycle of human failure and desire sound like such an amusing, preposterous, vastly elaborate and subtle kind of intrigue that you can only end up wanting to know more about it.