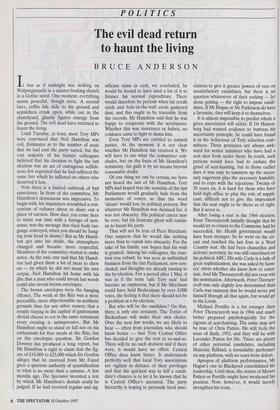 The evil dead return to haunt the living

It was as if midnight was striking on Walpurgisnacht in a sinister-looking church in a Gothic novel. One moment, everything seems peaceful, though eerie. A second later, coffin lids slide to the ground and sepulchres creak open, while out in the churchyard, ghastly figures emerge from the ground. The evil dead have returned to haunt the living.

Until Tuesday, at least, most Tory MPs were convinced that Neil Hamilton was evil. Estimates as to the number of seats that he had cost the party varied, but the vast majority of his former colleagues believed that his decision to fight the last election was an act of outrageous selfish- ness; few regretted that he had suffered the same fate which he inflicted on others who deserved it less.

Now there is a limited outbreak of bad conscience. In front of the committee, Mr Hamilton's demeanour was impressive. To begin with, his inquisitors resembled a con- vention of vultures about to share out a piece of carrion. How dare you come here to waste our time with a farrago of non- sense, was the message that their body lan- guage conveyed, when you should be hang- ing your head in shame? But as Mr Hamil- ton got into his stride, the atmosphere changed and became more respectful. Members of the committee started to make notes. At the end, one said that Mr Hamil- ton had given them a lot of meat to chew on — by which he did not mean his own corpse. Neil Hamilton hit home with his jibe that a man who could invent last words could also invent brown envelopes.

The brown envelopes were the hanging offence. The week at the Ritz was a mere peccadillo, more objectionable on aesthetic grounds than for any other reason; that a couple staying in the capital of gastronomy should choose to eat in the same restaurant every evening is unimpressive. But Mr Hamilton ought to stand or fall not on his enthusiasm for free meals at the Ritz, but on the envelopes question. Sir Gordon Downey has produced a long report, but Mr Hamilton is right to claim that the fig- ure of E18,000 to £25,000 which Sir Gordon alleges that he received from Mr Fayed gives a spurious authority of quantification to what is no more than a surmise. A few months ago, The Spectator invented a test by which Mr Hamilton's denials could be judged. If he had received regular and sig- nificant sums in cash, we concluded, he would be bound to have used a lot of it to finance his normal expenditure. There would therefore be periods when his credit cards and hole-in-the-wall cards gathered dust, and this ought to be traceable from the records. Mr Hamilton said that he was happy to cooperate with the scrutineers. Whether this was innocence or hubris, no evidence came to light to damn him.

Even Tory MPs are entitled to natural justice. At the moment it is not clear whether Mr Hamilton has received it. We will have to see what the committee con- cludes, but on the basis of Mr Hamilton's testimony, his guilt is by no means beyond reasonable doubt.

Of one thing we can be certain; Ave have not heard the last of Mr Hamilton. Tory MPs had hoped that the scandals of the last Parliament would gradually fade from the memories of voters, so that the word 'sleaze' would lose its political potency. But whatever Mr Hamilton was destined for, it was not obscurity. His political career may be over, but his frustrate ghost will contin- ue to haunt his party.

That will not be true of Piers Merchant. One suspects that he would like nothing more than to vanish into obscurity. For the sake of his family, one hopes that his wish is granted. Among his colleagues, the reac- tion was robust; he was seen as unfinished business from the last Parliament, now con- cluded, and thoughts are already turning to the by-election. For a period after 1 May, it was as if the term 'safe Tory seat' had become an oxymoron, but if Mr Merchant could have held Beckenham by over 4,000 votes, the feeling is that there should not be a problem at a by-election.

But who will be the candidate? On that, there is only one certainty. The Tories of Beckenham will make their own choice. Over the next few weeks, we are likely to hear — often from journalists who should know better — that Tory Central Office has decided to give the seat to so-and-so. There will be no such decision and if there were, it would have no effect. Central Office does know better. It understands perfectly well that local Tory associations are vigilant in defence of their privileges and that the quickest way to kill a candi- date's chances is to let it be known that he is Central Office's anointed. The party hierarchy is hoping to persuade local asso- ciations to give it greater powers of veto on unsatisfactory candidates, but there is no question whatsoever of their seeking — let alone getting — the right to impose candi- dates. If Mr Hague or Mr Parkinson do have a favourite, they will keep it to themselves.

It is almost impossible to predict whom a given association will select. If Dr Heisen- berg had wanted evidence to buttress his uncertainty principle, he could have found it in the behaviour of Tory selection com- mittees. These processes are always awk- ward for senior ministers who have had a seat shot from under them. In youth, such persons would have had to endure the grind of seat-hunting, but in those earlier days it was easy to summon up the neces- sary eagerness plus the necessary humility, and to cope with the rejections. Twenty or 30 years on, it is hard for those who have held high office to play the role of suppli- cant; difficult not to give the impression that the seat ought to be theirs as of right. But it never is.

After losing a seat in the 1966 election, Peter Thomeycroft initially thought that he would try to return to the Commons; had he succeeded, the Heath government would have been stronger. So he went on the cir- cuit and reached the last four in a West Country seat. He had been chancellor and defence secretary; he was still catechised on his political ABC. His wife Carla is a lady of great sophistication; she was asked by farm- ers' wives whether she knew how to enter- tain. And Mr Thomeycroft did not even will the nomination. Afterwards, Peter Thorney- croft was only slightly less determined than Carla was insistent that he would never put himself through all that again, but would go to the Lords.

Michael Portillo is a lot younger than Peter Thomeycroft was in 1966 and much better prepared psychologically for the rigours of seat-hunting. The same may not be true of Chris Patten. He still feels the scars of Bath, 1992, and they will be with Lavender Patten for life. There are plenty of other potential candidates, including Malcolm Rifldnd, a formidable performer on any platform, with no scars from defeat.

Apropos of platform performances, Mr Hague's one in Blackpool consolidated his leadership. Until then, the return of Messrs Patten or Portillo might have weakened his position. Now, however, it would merely strengthen his team.