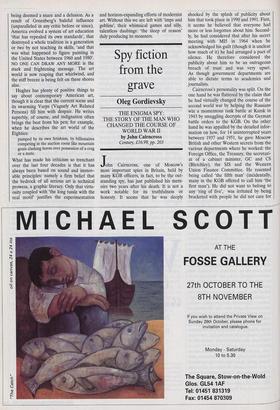 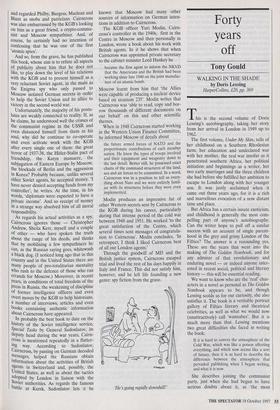 Spy fiction from the grave

THE ENIGMA SPY: THE STORY OF THE MAN WHO CHANGED THE COURSE OF WORLD WAR II by John Cairncross Century, £16.99, pp. 203 John Caimcross, one of Moscow's most important spies in Britain, held by many KGB officers, in fact, to be the out- standing spy, has just published his mem- oirs two years after his death. It is not a work notable for its truthfulness or honesty. It seems that he was deeply shocked by the splash of publicity about him that took place in 1990 and 1991. First, it seems he believed that everyone had more or less forgotten about him. Second- ly, he had considered that after his secret meeting with MI5 in 1964 when he acknowledged his guilt (though it is unclear how much of it) he had arranged a pact of silence. He therefore considered the publicity about him to be an outrageous breach of trust and was very upset. As though government departments are able to dictate terms to academics and journalists.

Cairncross's personality was split. On the one hand he was flattered by the claim that he had virtually changed the course of the second world war by helping the Russians win a momentous tank battle at Kursk in 1943 by smuggling decrypts of the German battle orders to the KGB. On the other hand he was appalled by the detailed infor- mation on how, for 14 uninterrupted years between 1937 and 1951, he gave Moscow British and other Western secrets from the various departments where he worked: the Foreign Office, the Treasury, the secretari- at of a cabinet minister, GC and CS (Bletchley), the SIS and the Western Union Finance Committee. He resented being called 'the fifth man' (incidentally, many in the KGB offered to call him 'the first man'). He did not want to belong to any 'ring of five', was irritated by being bracketed with people he did not care for and regarded Philby, Burgess, Maclean and Blunt as snobs and patricians. Cairncross was also embarrassed by the KGB's looking on him as a great friend, a crypto-commu- nist and Moscow sympathiser. And, of course, he certainly had no intention of confessing that he was one of the first 'atomic spies'.

And so, from the grave, he has published this book, whose aim is to refute all aspects of publicity about him that he does not like, to play down the level of his relations With the KGB and to present himself as a very reluctant Soviet agent, in the main as the Enigma spy who only passed to Moscow isolated German secrets in order to help the Soviet Union and its allies to victory in the second world war.

Unfortunately, the majority of his postu- lates are weakly connected to reality. If, as he claims, he understood well the crimes of the communist regime in the USSR and even distanced himself from them in his soul, why did he continue to co-operate and even activate work with the KGB after every single one of them: the great terror of 1937-38, the Hitler-Stalin pact of friendship, the Katyn massacre, the subjugation of Eastern Europe by Moscow, the blockade of Berlin and the aggression in Korea? Probably because, unlike several Other Soviet agents, he accepted money. 'I have never denied accepting funds from my controller', he writes. At the time, in his words, 'diplomats were expected to have a Private income'. And so receipt of money in a strange way absolved him of all moral responsibility.

As regards his actual activities as a spy, Cairncross ignores those — Christopher Andrew, Sheila Kerr, myself and a couple of other — who have spoken the truth about the range of his deeds, and thinks that by mobilising a few sympathisers he can, as the Russian saying goes, whitewash a black dog. (I noticed long ago that in this country and in the United States there are many people of pro-totalitarian mentality Who rush to the defence of those who ran errands for Moscow.) Moreover, in recent Years, in conditions of total freedom of the Press in Russia, the weakening of discipline of former intelligence officers and even overt moves by the KGB to help historians, a number of interviews, articles and even books containing authentic information about Cairncross have appeared. In probably the best book to date on the history of the Soviet intelligence service, Special Tasks by General Sudonlatov, its deputy head during the war years, Cairn- cross is mentioned repeatedly in a flatter- mg way. According to Sudonlatov, Cairncross, by passing on German decoded messages, helped the Russians obtain information about the activities of British agents in Switzerland and, possibly, the United States, as well as about the tactics adopted by London in liaison with the Soviet authorities. As regards the famous battle at Kursk, Sudonlatov lets it be known that Moscow had many other sources of information on German inten- tions in addition to Cairncross.

The KGB officer Yuri Modin, Cairn- cross's controller in the 1940s, first in the Centre in Moscow and then personally in London, wrote a book about his work with British agents. In it he shows that when Cairncross was appointed private secretary to the cabinet minister Lord Hankey he

became the first agent to inform the NKVD that the Americans and the British had been working since late 1940 on the joint manufac- ture of an atomic bomb.

Moscow learnt from him that 'the Allies were capable of producing a nuclear device based on uranium 235'. Modin writes that Cairncross was 'able to read, copy and bor- row thousands of different documents on our behalf on this and other scientific themes.

When in 1948 Cairncross started working in the Western Union Finance Committee, he informed Moscow of details about

the future armed forces of NATO and the proportionate contributions of each member nation. He knew the types of troops involved and their equipment and weaponry down to the last detail. Better still, he possessed exact charts of the command structures of the land, sea and air forces to be committed. In a word, Cairncross was in a position to tell us every- thing about Nato and we were entirely famil- iar with its structures before they were even implemented.

Modin produces an impressive list of other Western secrets sent by Cairncross to the KGB during his career, particularly during that intense period of the cold war between 1948 and 1951. He worked 'to the great satisfaction of the Centre, which several times sent messages of congratula- tion to Cairncross'. Modin concludes, 'In retrospect, I think I liked Cairncross best of all our London agents.'

Through the goodwill of MIS and the British justice system, Cairncross escaped trial and lived the rest of his days happily in Italy and France. This did not satisfy him, however, and he left life founding a new genre: spy fiction from the grave.