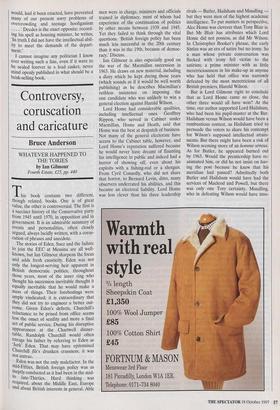 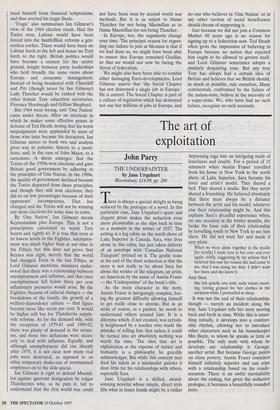 WHATEVER HAPPENED TO THE TORIES by Ian Gilmour Fourth Estate, .£25, pp. 440 his book contains two different,

though related, books. One is of great value, the other is controversial. The first is a succinct history of the Conservative party from 1945 until 1970, in opposition and in government. It is an admirable summary of events and personalities, often closely argued, always lucidly written, with a corus- cation of phrases and anecdote.

The stories of Eden, Suez and the failure to join the EEC at Messina are all well- known, but Ian Gilmour sharpens the focus and adds fresh causticity. Eden was not only the longest-serving heir apparent in British democratic politics; throughout those years, most of the inner ring who thought his succession inevitable thought it equally inevitable that he would make a mess of things. Their forebodings were amply vindicated; it is extraordinary that they did not try to engineer a better out- come. Given Eden's defects, Churchill's reluctance to be prised from office seems less the onset of senility and more a final act of public service. During his disruptive appearances at the Chartwell dinner- table, Randolph Churchill would often enrage his father by referring to Eden as Jerk' Eden. That may have epitomised Churchill fi/s's drunken crassness; it was not untrue.

Eden was not the only malefactor. In the mid-Fifties, British foreign policy was as ineptly conducted as it had been in the mid- to late-Thirties. Hard thinking was required, about the Middle East, Europe and about British interests in general. Able men were in charge, ministers and officials trained in diplomacy, most of whom had experience of the continuation of politics by other means between 1939 and 1945. Yet they failed to think through the vital questions. 'British foreign policy has been much less successful in the 20th century than it was in the 19th, because of democ- racy.' Discuss.

Ian Gilmour is also especially good on the war of the Macmillan succession in 1963. He draws on new material, including a diary. which he kept during those years (which sounds as if it would be well worth publishing) as he describes Macmillan's ruthless insistence on imposing the one candidate who was unlikely to win a general election against Harold Wilson.

Lord Home had considerable qualities, including intellectual ones. Geoffrey Rippon, who served in Cabinet under Macmillan, Home and Heath, said that Home was the best at despatch of business. Not many of the general electorate have access to the Cabinet table, however, and Lord Home's reputation suffered because he would never have dreamt of flaunting his intelligence in public and indeed had a horror of showing off, even about his exploits with a fishing-rod or a shotgun. From Cyril Connolly, who did not share that horror, to Bernard Levin, ditto, many observers underrated his abilities, and this became an electoral liability. Lord Home was less clever than his three leadership rivals — Butler, Hailsham and Maudling — but they were men of the highest academic intelligence. To put matters in perspective, Alec Home was cleverer than Tony Blair is. But Mr Blair has attributes which Lord Home did not possess, as did Mr Wilson. In Christopher Booker's phrase, the early Sixties was an era of satire but no irony. So a man whose private conversation was flecked with irony fell victim to the satirists; a prime minister with as little meretriciousness in his make-up as anyone who has held that office was narrowly defeated by the most meretricious of all British premiers, Harold Wilson.

But is Lord Gilmour right to conclude that as Lord Home came so close, the other three would all have won? At the time, our author supported Lord Hailsharn, who had been his pupil-master at the Bar. Hailsham versus Wilson would have been a rumbustious contest, as Hailsham tried to persuade the voters to share his contempt for Wilson's supposed intellectual attain- ments. But there might have been a risk of Wilson seeming more of an homme serieux. As for Butler, he appeared burned out by 1963. Would the premiership have re- animated him, or did he not insist on hav- ing the post because he knew that his meridian had passed? Admittedly both Butler and Hailsham would have had the services of Macleod and Powell, but there was only one Tory certainty, Maudling, who in defeating Wilson would have insu- lated himself from financial temptations, and thus averted his tragic finale.

'Tragic' also summarises Ian Gilmour's view of the 1964 election result. Had the Tories won, Labour would have been forced into the Smith/Blair reforms a gen- eration earlier. There would have been no Labour lurch to the left and hence no Tory lurch to the right. British politics would have become a contest for the centre ground, fought between party leaderships who held broadly the same views about Europe and economic management. Instead of being bracketed with Churchill and Pitt (though never by Ian Gilmour) Lady Thatcher would be ranked with the other female Tory education secretaries, Florence Horsburgh and Gillian Shephard.

But 1964 went wrong, and 'One Nation' came under threat. After an interlude in which he makes some effective points in defence of Ted Heath, noting that his worst misjudgments were applauded by most of those who later became his detractors, Ian Gilmour moves to book two and analysis gives way to polemic, history to a mani- festo, and, in the case of John Major, to a caricature. A thesis emerges: that the Tories of the 1950s won elections and gave Britain good government by adhering to the principles of One Nation. In the 1980s, the quality of government declined because the Tories departed from those principles, and though they still won elections, they did so on low percentages because of their opponents' incompetence. That has changed and the Tories will not be winning any more elections for some time to come.

By 'One Nation', Ian Gilmour means Keynesianism plus Europe. This is not a prescription calculated to warm Tory hearts and rightly so. It is true that even at its lowest levels in the Eighties, unemploy- ment was much higher than at any time in the Fifties; but this does not prove that Keynes was right, merely that the world had changed. Even in the late Fifties, as Lord Gilmour mentions, ministers under- stood that there was a relationship between unemployment and inflation, and that once unemployment fell below three per cent inflationary pressures would arise. By the Eighties, because of cultural changes — the breakdown of the family, the growth of a welfare-dependency culture — that figure became more like seven per cent. It would be higher still but for Thatcherite supply- side reforms. As for the demand side, with the exception of 1979-81 and 1989-92, there was plenty of demand in the econo- my, and those two deflations were neces- sary to deal with inflation. Equally, and although unemployment did rise sharply after 1979, it is not clear how many real jobs were destroyed, as opposed to an often temporary shake-out of overmanned employees on to the dole queue.

Ian Gilmour is right to defend Macmil- lan against ignorant denigration by vulgar Thatcherites who, as he puts it, fail to understand that the first world war could not have been won by second world war methods. But it is as unjust to blame Thatcher for not being Macmillan as to blame Macmillan for not being Thatcher.

In Europe, too, the arguments change over time. The principal reason for regret- ting our failure to join at Messina is that if we had done so, we might have been able to ensure that Europe remained Gaullist, so that we would not now be facing the threat of federalism.

We might also have been able to combat other damaging Euro-developments. Lord Gilmour asserts that 'the Social Chapter has not destroyed a single job in Europe'. He is correct. The Social Chapter is part of a culture of regulation which has destroyed not one but millions of jobs in Europe, and no one who believes in 'One Nation' or in any other version of social beneficence should dream of supporting it.

Just because we did not join a Common Market 40 years ago is no reason for signing up to a federation now. Ted Heath often gives the impression of believing in Europe because no nation that rejected him ought to be allowed to govern itself, and Lord Gilmour sometimes adopts a similarly despairing tone. But any true Tory has always had a certain idea of Britain and believes that we British should, as much as possible, rule ourselves. Many continentals, confronted by the failure of the nation-state, believe in the necessity of a super-state. We, who have had no such failure, recognise no such necessity.