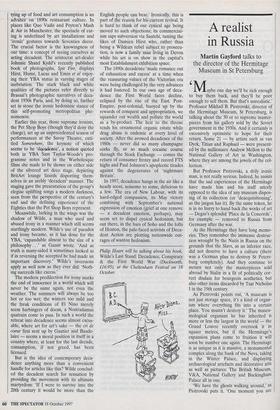 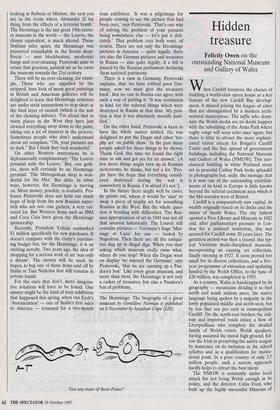 A realist in Russia

Martin Gayford talks to the director of the Hermitage Museum in St Petersburg Maybe one day we'll be rich enough to buy them back, and they'll be poor enough to sell them. But that's unrealistic.'

Professor Mikhail B. Piotrovski, director of the Hermitage Museum, St Petersburg, is talking about the 30 or so supreme master- pieces from his gallery sold by the Soviet government in the 1930s. And it certainly is excessively optimistic to hope for their return. Some 21 — by artists such as van Dyck, Titian and Raphael — were present- ed by the millionaire Andrew Mellon to the National Gallery of Art in Washington, where they are among the jewels of the col- lection.

But Professor Piotrovski, a drily ironic man, is not really serious. Indeed, he insists that the sad experiences of the Hermitage have made him and his staff utterly opposed to the idea of any museum dispos- ing of its collection (or `deacquisitioning', as the jargon has it). By the same token, he is in no hurry to hand back the works of art — Degas's splendid 'Place de la Concorde', for example — removed to Russia from Germany after the war.

At the Hermitage they have long memo- ries. They remember the immense destruc- tion wrought by the Nazis in Russia on the grounds that the Slays, as an inferior race, did not deserve to have a culture (there was a German plan to destroy St Peters- burg completely). And they continue to mourn not only the masterpieces sold abroad by Stalin in a fit of politically cor- rect disdain for bourgeois aesthetics, but also other items discarded by Tsar Nicholas Tin the 19th century.

As Piotrovski points out, 'A museum is not just storage space, it's a kind of organ- ism where everything fits into a certain place. You mustn't destroy it.' The museu- mological organism he has inherited is more or less the largest in the world — the Grand Louvre recently overtook it in square metres, but if the Hermitage's expansion plans come to fruition it will soon be number one again. The Hermitage is as unique as it is massive, a monumental complex along the bank of the Neva, taking in the Winter Palace, and displaying archaeological artefacts and decorative arts as well as pictures: The British Museum, V&A, National Gallery and Buckingham Palace all in one.

'We have the ghosts walking around,' as Piotrovski puts it. 'One moment you are looking at Rubens or Matisse, the next you are in the room where Alexander II lay dying from the effects of a terrorist bomb.' The Hermitage is the last great 19th-centu- ry museum in the world — the Louvre, the closest equivalent, is much altered. Those Stalinist sales apart, the Hermitage was preserved remarkably in the Soviet deep- freeze — sans blockbusters, modernist hangs and over-cleaning. Piotrovski aims to retain that gracious, palatial air as he eases the museum towards the 21st century.

There will be no over-cleaning, for exam- ple. Those who are appalled by the stripped, bare look of many great paintings in British and American galleries will be delighted to learn that Hermitage restorers are under strict instructions to stop short at the final layer of varnish (which is the nub of the cleaning debate). 'I'm afraid that in many places in the West they have just cleaned everything away down to the paint, taking out a lot of nuances in the process. Sometimes people who don't understand about art complain, "Oh, your pictures are so dark." But I think they look wonderful.'

On other Western innovations he is diplomatically complimentary: 'The Louvre pyramid suits the Louvre.' But, one gath- ers, there will certainly be no Hermitage pyramid. 'The Metropolitan shop is won- derful for the Met.' But ditto. In other ways, however, the Hermitage is moving on. More money, possibly, is available. Pro- fessor Piotrovski does not hold out much hope of help from the new Russian super- rich who are not, one gathers, a very cul- tured lot. But Western firms such as IBM and Coca Cola have given the Hermitage sponsorship.

Recently, President Yeltsin earmarked $1 million specifically for new purchases. It doesn't compare with the Getty's purchas- ing budget but, for the Hermitage, it is an exciting novelty. Two years ago, the idea of shopping for a serious work of art 'was only a dream'. The money will be used, he hopes, to buy one of those items sold off by Stalin or Tsar Nicholas that still remains in private hands.

For the ones that don't, more imagina- tive solutions will have to be found. One answer might be the kind of loan exhibition that happened this spring, when van Eyek's 'Annunciation' — one of Stalin's first sales to America — returned for a two-month loan exhibition. 'It was a pilgrimage for people coming to see the picture that had been ours,' says Piotrovski. 'That's one way of solving the problem of your pictures being somewhere else — let's put it deli- cately.' That problem cuts both ways, of course. There are not only the Hermitage pictures in America — quite legally; there are also the German pictures and treasures in Russia — also quite legally, if a bill is passed by the Russian parliament declaring them national patrimony.

There is a view in Germany, Piotrovski explains, that 'we have robbed poor Ger- many, now we must give the treasures back'. But no one in Russia can agree with such a way of putting it. 'It was restitution in kind for the cultural things which were destroyed in Russia at that time. My posi- tion is that it was absolutely morally justi- fied.'

On the other hand, Piotrovski is keen to have the whole matter settled. He was delighted to put the Degas and other 'tro- phy art' on public show. 'In the past many people asked for these things to be shown. Thank God, this time we found the right time to ask and got yes for an answer.' (A few more things might turn up in Russian storerooms, he thinks, but not a lot. 'Peo- ple have the hope that everything consid- ered destroyed during the war is somewhere in Russia. I'm afraid it's not.') In the future there might well be cases, he points out, where it would be 'nice' to swap a piece of trophy art for something Russian in the West. But the whole ques- tion is bristling with difficulties. The Rus- sian appropriation of art in 1945 was not all that unusual historically. The Louvre still contains pictures — Veronese's huge 'Mar- riage at Cana' for one — looted by Napoleon. Then there are all the antiqui- ties dug up in illegal digs. When you start asking which museum really owns what, where do you stop? When the Degas went on display 'we warned the Germans', says Piotrovski, 'that we are opening up a Pan- dora's box'. Like every great museum, and more than most, the Hermitage is not only a casket of treasures, but also a Pandora's box of problems.

The Hermitage: The biography of a great museum by Geraldine Norman is published on 6 November by Jonathan Cape (£20).

'Got any more of those Fobs?'