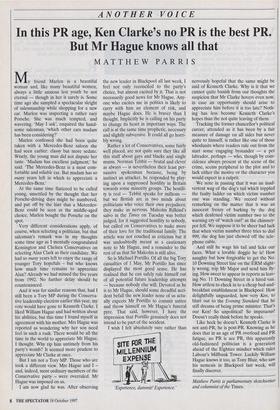 In this PR age, Ken Clarke's no PR is the best PR.

But Mr Hague knows all that

My friend Marlen is a beautiful woman and, like many beautiful women, always a little anxious lest youth be not eternal — though in her it surely is. Some time ago she sampled a spectacular sleight of salesmanship while shopping for a new car. Marlen was inspecting a rather racy Porsche. She was much tempted, and wavering. 'May I ask', enquired the hand- some salesman, 'which other cars madam has been considering?'

Marten confessed she had been quite taken with a Mercedes-Benz saloon she had seen earlier: classy but more sedate. Wisely, the young man did not dispute her taste. 'Madam has excellent judgment,' he said. 'The Mercedes-Benz is a most com- fortable and reliable car. But madam has so many years left in which to appreciate a Mercedes-Benz.'

At the same time flattered to be called young, unsettled by the thought that her Porsche-driving days might be numbered, and put off by the hint that a Mercedes- Benz could be seen as the middle-aged choice, Marlen bought the Porsche on the spot.

Very different considerations apply, of course, when selecting a politician, but that salesman's remark was in my thoughts some time ago as I mentally congratulated Kensington and Chelsea Conservatives on selecting Alan Clark as their candidate. We had so many years left to enjoy the range of younger Tory hopefuls – but who knows how much time remains to appreciate Alan? Already we had missed the five years from 1992. No further delay should be countenanced.

And it was for similar reasons that, had I still been a Tory MP during the Conserva- tive leadership election earlier this year, my vote would have gone to Kenneth Clarke. I liked William Hague and had written about his abilities, but this time I found myself in agreement with his mother. Mrs Hague was reported as wondering why her son need feel in such a rush. There would be all the time in the world to appreciate Mr Hague, I thought. Why rip him untimely from his party's womb? It seemed more prudent to appreciate Mr Clarke at once.

But I am not a Tory MP. Those who are took a different view. Mrs Hague and I – and, indeed, most ordinary members of the Conservative party – were overruled. Mr Hague was imposed on us.

I am now glad he was. Alter observing the new leader in Blackpool all last week, I feel not only reconciled to the party's choice, but almost excited by it. That is not necessarily good news for Mr Hague. Any- one who excites me in politics is likely to carry with him an element of risk, and maybe Hague does. He is braver than I thought. Implicitly he is calling on his party to change its heart in important ways. The call is at the same time prophetic, necessary and slightly subversive. It could all go horri- bly wrong.

Rather a lot of Conservatives, some fairly well placed, are not quite sure they like all this stuff about gays and blacks and single mums. Norman Tebbit — brutal and clever as always — is nevertheless their least per- suasive spokesman because, being by instinct an attacker, he responded •by play- ing upon a suppressed hostility in Britain towards some minority groups. The hostili- ty is real — Tebbit speaks for millions — but we British are in two minds about politicians who voice their own prejudices; they make us nervous. Malcolm Rifkind's salvo in the Times on Tuesday was better judged, for it suggested hostility to nobody, but called on Conservatives to make more of their love for the traditional family. The article was not couched as criticism but it was undoubtedly meant as a cautionary note to Mr Hague, and a reminder to the rest of us that Sir Malcolm is still alive.

So is Michael Portillo. Of all the big Tory casualties of 1 May, Mr Portillo has since displayed the most good sense. He has realised that he can safely rule himself out of all potential future leadership attempts — because nobody else will. Devoted as he is to Mr Hague, should some dreadful acci- dent befall the new !leader none of us actu- ally expects Mr Portillo to commit suttee and throw himself on Mr Hague's funeral pyre. That said, however, I have the impression that Portillo genuinely does not intend to be part of the accident.

I wish I felt absolutely sure rather than 'Experience, dammit. Experience.' nervously hopeful that the same might be said of Kenneth Clarke. Why is it that we cannot quite banish from our thoughts the suspicion that Mr Clarke hovers even now, in case an opportunity should arise to appreciate him before it is too late? Noth- ing has less become Kenneth Clarke's hopes than the not quite leaving of them.

Tracking the former chancellor's political career, attended as it has been by a fair measure of damage on all sides but never quite to himself, is rather like one of those whodunits where readers rule out from the start some engaging bystander — a pet labrador, perhaps — who, though by coin- cidence always present at the scene of the crime, seems peripheral to the plot and to lack either the motive or the character you would expect in a culprit.

We note in passing that it was an inad- vertent wag of the dog's tail which toppled the faulty ladder on which victim number one was standing. We record without remarking on the matter that it was an innocent frenzy of barking by the dog which deafened victim number two to the warning cry of 'watch out!' as the chimney- pot fell. We suppose it to be sheer bad luck that when victim number three tries to dial 999, the dog has just chewed off the tele- phone cable.

And still he wags his tail and licks our faces. What a lovable doggie he is! How naughty but how forgivable to get the No. 10 Downing Street line on the ERM slight- ly wrong, trip Mr Major and send him fly- ing. How sweet to appear in reports as leav- ing No. 11 Downing Street in a hired van. How artless to check in to a cheap bed-and- breakfast establishment in Blackpool. How delightfully unguarded, how very Ken, to blurt out to the Evening Standard that he still dreams of being prime minister. That's our Ken! So unpolitical! So impetuous! Doesn't really think before he speaks.

Like heck he doesn't. Kenneth Clarke is not anti-PR, he is post-PR. Knowing as he does that in an age of PR overload and PR fatigue, no PR is ace PR, this apparently old-fashioned politician is a generation ahead of the Eighties mindset which rules Labour's Millbank Tower. Luckily William Hague knows it too, as Tony Blair, who saw his nemesis in Blackpool last week, will finally discover.

Matthew Parris is parliamentary sketchwriter and columnist of the Times.