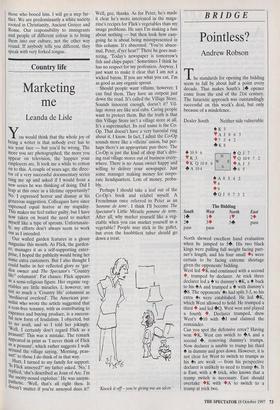 You would think that the whole joy of being a writer is that nobody ever has to see your face — but you'd be wrong. The more you are photographed, the more you appear on television, the happier your employers are. It took me a while to cotton on to this. A couple of years ago, the direc- tor of a very successful documentary series rang me up and asked if I would front a new series he was thinking of doing. Did I leap at this once in a lifetime opportunity? No. I expressed horror and dismay at his generous suggestion. Colleagues have since expressed equal horror at my stupidity. This makes me feel rather guilty, but I have now taken on board the need to market Myself like a type of sprouts. Unfortunate- ly, my efforts don't always seem to work out as I intended.

Our walled garden features in a glossy magazine this month. As Flick, the garden- er, manages it as a self-supporting enter- Prise, I hoped the publicity would bring her some extra customers. But I also thought I could bathe in her reflected glory as 'gar- den owner and The Spectator's "Country life" columnist'. Fat chance. Flick appears as a semi-religious figure. Her organic veg- etables are little miracles. I, however, am not so much a 'Country life' columnist as mediaeval overlord'. The American jour- nalist who wrote the article suggested that a rent-free tenancy, with us contributing to expenses and buying produce, is a success- ful new form of feudalism. I objected, but to no avail, and so I told her jokingly, Well, I certainly don't regard Flick as a Peasant!' This was a mistake. The remark appeared in print as 'I never think of Flick as a peasant', which rather suggests I walk around the village saying, 'Morning, peas- ant! to those I do think of in that way. , Hurt, I turned to my family for support. Is Flick annoyed?' my father asked. 'No,' I replied, 'she's described as Joan of Arc. I'm the snotty-nosed exploiter.' He was unsym- pathetic. 'Well, that's all right then. It doesn't matter if you're annoyed does it?' Well, gee, thanks. As for Peter, he's made it clear he's more interested in the maga- zine's recipes for Flick's vegetables than my image problems. He says I'm making a fuss about nothing — but then look how easy- going he is about being misrepresented in this column. It's abnormal. 'You're abnor- mal, Peter, d'yer hear?' There he goes mut- tering, `Today's newspaper is tomorrow's fish and chips paper.' Sometimes I think he has no respect for my profession. Anyway, I just want to make it clear that I am not a wicked baron. If you are what you eat, Pm as good as any organic sprout.

Should people want villains, however, I can find them. They have an outpost just down the road. It's called the Village Store. Sounds innocent enough, doesn't it? Vil- lage stores are like seal cubs. Caring people want to protect them. But the truth is that this Village Store isn't a village store at all. It's a supermarket. Its real name is the Co- Op. That doesn't have a very baronial ring about it, I know. In fact, I admit the Co-Op sounds more like a villeins' union, but per- haps there's an appropriate pun there. The Co-Op is just the kind of shop that's driv- ing real village stores out of business every- where. There is no Asian owner happy and willing to deliver your newspaper. Just some manager making money for corpo- rate headquarters. Lots of money, proba- bly.

Perhaps I should take a leaf out of the Co-Op's book and relabel myself. A Frenchman once referred to Peter as an `homme de tare'. I think I'll become The Spectator's Little Miracle pomme de tetre. After all, why market yourself like a veg- etable when you can market yourself as a vegetable? People may stick in the gullet, but even the knobbliest tuber should go down a treat.