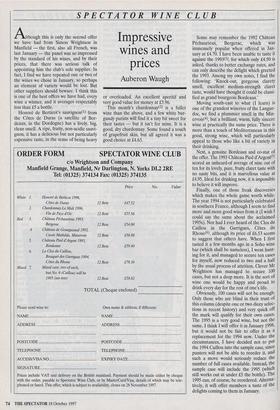 Athough this is only the second offer we have had from Simon Wrightson in Manfield — the first, also all French, was last January — the panel was so impressed by the standard of his wines, and by their prices, that there was serious talk of appointing him the club's sole supplier. In fact, I find we have repeated one or two of the wines we chose in January, so perhaps an element of variety would be lost. But other suppliers should beware. I think this is one of the best offers we have had, every wine a winner, and it averages respectably less than £5 a bottle.

Honore de Berticot's sauvignon(1) from the Cotes de Duras (a satellite of Bor- deaux, in the Dordogne) has a lively, big, clean smell. A ripe, fruity, non-acidic sauvi- gnon, it has a delicious but not particularly expensive taste, in the sense of being heavy or overloaded. An excellent aperitif and very good value for money at £3.96.

This month's chardonnay(2) is a fuller wine than the above, and a few white bur- gundy purists will find it a tiny bit sweet for their tastes — but it isn't for mine. It is a good, dry chardonnay. Some found a touch of grapefruit skin, but all agreed it was a good choice at £4.63. Some may remember the 1992 Château Pechaurieux, Bergerac, which was immensely popular when offered in Jan- uary at £4.70. I have been unable to taste it against the 1993(s), for which only £4.50 is asked, thanks to better exchange rates, and can only describe the delight which greeted the 1993. Among my own notes, I find the following: 'Knock-out, gorgeous clarety smell, excellent medium-strength claret taste, would have thought it could be classi- fied as grand bourgeois Bordeaux.'

Moving south-east to what (I learn) is one of the grandest wineries of the Langue- doc, we find a plummier smell in the Min- ervois(4), but a brilliant, warm, fully sincere wine at practically the same price. There is more than a touch of Mediterranean in this good, strong wine, which will particularly appeal to those who like a bit of variety in their drinking.

Next, a genuine Bordeaux and co-star of the offer. The 1993 Château Pied d'Argent(5) scored an unheard-of average of nine out of ten for its lovely, pure, fruity claret taste with no nasty bits, and it is marvellous value at £4.95. Ideal for drinking now, it is impossible to believe it will improve.

Finally, one of those freak discoveries which makes the whole game worth while. The year 1994 is not particularly celebrated in southern France, although I seem to find more and more good wines from it (I wish I could say the same about the acclaimed 1995s). Nor had I ever heard of the Clos du Caillou in the Garrigues, Cotes du Rhone(6), although its price of £6.53 seems to suggest that others have. When I first tasted it a few months ago in a Soho wine bar (which shall be nameless), I went hunt- ing for it, and managed to secure ten cases for myself, now reduced to two and a half by the usual process of attrition. Clever Mt Wrightson has managed to secure 100 cases, but not a drop more. It is the sort of wine one would be happy and proud to drink every day for the rest of one's life.

Obviously, 100 cases will not be enough. Only those who are blind in their trust of this column (despite one or two dicey selec- tions in recent history) and very quick off the mark will qualify for their own cases. The 1995 is a very good wine, but not the same. I think I will offer it in January 1998, but it would not be fair to offer it as a replacement for the 1994 now. Under the circumstances, I have decided not to put the 1994 Caillou into the sample case, since punters will not be able to reorder it, and such a move would seriously reduce the number of full cases available. Instead, the sample case will include the 1995 (which still works out at under £5 the bottle). The 1995 can, of course, be reordered. Alterna- tively, it will offer members a taste of the delights coming to them in January.