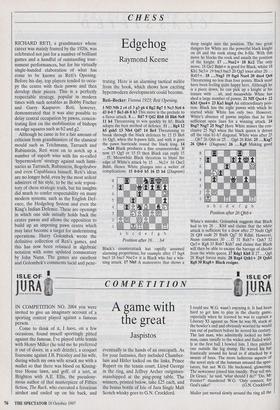 RICHARD RETI, a grandmaster whose career was mainly framed by the 1920s, was celebrated not just for a number of brilliant games and a handful of outstanding tour- nament performances, but for his virtually single-handed elaboration of what has come to be known as Reti's Opening. Before his day, top players tended to occu- py the centre with their pawns and then develop their pieces. This is a perfectly respectable strategy, popular in modern times with such notables as Bobby Fischer and Garry Kasparov. Reti, however, demonstrated that it was also possible to delay central occupation by pawns, concen- trating first on the mobilisation of bishops on edge squares such as b2 and g2.

Although he came in for a fair amount of criticism from grandmasters of the classical mould such as Teichmann, Tarrasch and Rubinstein, Reti went on to notch up a number of superb wins with his so-called 'hypermodern' strategy against such lumi- naries as Tarrasch, Rubinstein, Bogolyubov and even Capablanca himself. Reti's ideas are no longer held, even by the most ardent admirers of his style, to be the sole reposi- tory of chess strategic truth, but his insights did much to confer respectability on many modern systems, such as the English Def- ence, the Hedgehog System and even the King's Indian Defence. These are openings in which one side initially holds back the centre pawns and allows the opposition to build up an imposing pawn centre which may later become a target for undermining operations. Harry Golombek wrote the definitive collection of Reti's games, and this has now been reissued in algebraic notation with some updated commentary by John Nunn. The games are excellent and Golombek's comments lucid and perm- trating. Here is an alarming tactical mêlée from the book, which shows how exciting hypermodern developments could become.

Black's counterattack has rapidly assumed alarming proportions, for example after 17 fxg4 bxc3 18 bxc3 Nxe2+ it is Black who has a win- ning attack. 17 Nb5 A manoeuvre that shows a deep insight into the position. The two great dangers for White are the powerful black knight on d4 and the rook along the b-file. With this move he blocks the rook and assails the position of the knight. 17 ... Nxe2+ 18 Kc2 The only move. 18 Qe2 Bxh6+ is good for Black, whilst 18 ICb 1 Nc3+ 19 bxc3 bxc3 20 Qg5 loses after 20 ... Rxb5+. 18 ... Nxg3 19 fitg4 Nxe4 20 dxe4 Qe6 Threatening no less than four points. Black must have been feeling quite happy here. Although he is a piece down, he can pick up a knight at his leisure with ... a6, and meanwhile White has shed a large number of pawns. 21 Nf5 Qxc4+ 22 KM Qxe4+ 23 Kal hxg4 An extraordinary posi- tion. Black has the eight pawns with which he started while White has only two. However, White's absence of pawns implies that he has sufficient open lines for a winning attack. 24 Bxg7 Nxg7 25 Nxg7 Here White misses the con- clusive 25 Ng3 when the black queen is driven off the vital bl-h7 diagonal. White wins after 25