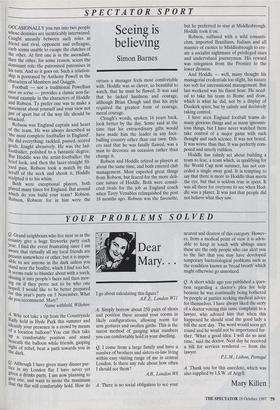 OCCASIONALLY you run into two people Whose destinies are inextricably intertwined. Caught uneasily between such roles as friend and rival, opponent and colleague, each seems unable to escape the clutches of the other. At first one is in the ascendant, then the other, for some reason, seizes the dominant role: the patronised patronises in his turn. And so it goes on. Such a relation- ship is portrayed by Anthony Powell in the Characters of Members and Quiggin. Football — not a traditional Powellian rnise en scene — provides a classic non-fic- tional example in the characters of Hoddle and Robson. To prefer one was to make a statement about yourself and your view not Just of sport but of the way life should be attacked.

Robson was England captain and heart Of the team. He was always described as the most complete footballer in England'. lie did everything: tackled, passed, scored goals, fought abrasively. He was the lad- footballer, polished to a fantastic degree. But Hoddle was the artist-footballer: the brief look, and then the laser-straight 50- Yard pass. Robson took a match by the scruff of the neck and shook it, Hoddle sculpted it to his whim.

Both were exceptional players, both Played many times for England. But around Which do you build your team? Robson, Robson, Robson: for in him were the virtues a manager feels most comfortable with. Hoddle was so clever, so beautiful to watch, that he must be flawed. It was said that he lacked hardness and courage, although Brian Clough said that his style required the greatest form of courage, moral courage.

dough's words, spoken 16 years back, look better by the day. Some said at the time that his extraordinary gifts would have made him the leader in any foot- balling country other than our own. Oth- ers said that he was fatally flawed, was a man to decorate an occasion rather than change it. Robson and Hoddle retired as players at about the same time, and both entered club management. Most expected great things from Robson, but feared for the more deli- cate nature of Hoddle. Both were consid- ered rivals for the job as England coach when Terry Venables relinquished the post 18 months ago. Robson was the favourite, but he preferred to stay at Middlesbrough. Hoddle took it on.

Robson, suffused with a wild romanti- cism, imported Brazilians, Italians and all manner of exotics to Middlesbrough to cre- ate a socialist nightmare of privileged stars and undervalued journeymen. His reward was relegation from the Premier to the lower division.

And Hoddle — well, many thought his managerial credentials too slight, his nature too soft for international management. But last weekend was his finest hour. He need- ed to take his team to Rome and draw, which is what he did, not by a display of Dunkirk spirit, but by calmly and decisively taking control.

I have seen England football teams do many glorious things and as many ignomin- ious things, but I have never watched them take control of a major game with such thought and such science. It was not brutal. It was worse than that. It was perfectly com- posed and utterly ruthless.

Hoddle has calmly set about building a team to fear, a team which, in qualifying for the World Cup next summer, has not con- ceded a single away goal. It is tempting to say that there is more to Hoddle than meets the eye, but that is seldom true in sport. It was all there for everyone to see when Hod- dle was a player. It was just that people did not believe what they saw.