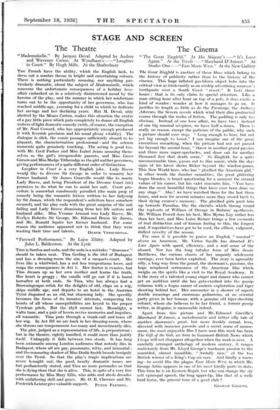 " The Great Ziegfeld." At His Majesty's " It's Love Again." At the Tivoli—" Marchand D'Amour." At Studio One "East Meets West." At the New Gallery The Great Ziegfeld is another of those films which belong to the history of publicity rather than to the history of the cinema. This huge inflated gas-blown object bobs into the critical view as irrelevantly as an airship advertising someone's toothpaste over a South Coast " resort." It lasts three hours : that is its only claim to special attention. Like a man sitting hour after hour on top of a pole, it does excite a kind of wonder ; wonder at how it manages to go on. It justifies its length as little as do the Faraways, the Anthonj Adverses, the Severn novels which wind their dim protracted course through the realm of fiction. The padding is only too obvious. Instead of one love affair, we have two ; instead of one big musical set-piece, we have half a dozen. There is really no reason, except the patience of the public, why such a picture should ever stop. " Long enough to bore, but not yet big enough to boost," I can imagine one of the great executives remarking, when the picture had not yet passed far beyond the second hour, " throw in another grand passion and three more super-spectacles, and draw out for another thousand feet that death scene." So Ziegfeld, for a. quite unconscionable time, passes out to dim music, while the sky- signs of his latest shows flicker beyond the window-panes. This New World hero, who has " glorified the American girl," in other words the dumber carnalities, the great glittering bogus blondes, is heard questioning for a moment the eternal values of his career, but his valet reassures him, " You have done the most beautiful things that have ever been done on any stage." Alas ! we have watched them for the last three hours, and now for several minutes more they crowd back to their dying creator's memory. The glorified girls push him up towards Paradise, like the cherubs which throng round the topboots of William of Orange in Rubens' apotheosis. Mr. William Powell does his best, Miss Myrna Loy rather less than her best, and Miss Luise Rainer brings a few moments of real distinction and of human feeling to this, the longest and, if superlatives have got to be used, the silliest, vulgarest, dullest novelty of the season.

For once it is possible to praise an English " musical " above an American. Mr. Victor Saville has directed It's Love Again with speed, efficiency, and a real sense of the absurd. Nor has the long tubular form of Miss Jessie Matthews, the curious charm of her ungainly adolescent carriage, ever been better exploited. The story is agreeably silly, a long way from the grand, the showman's, passions, the huge misplaced seriousness of the American film which weighs on the spirits like a visit to the Royal Academy. It is the story of a talented young singer and dancer who cannot get an audition until she has gate-crashed into the gossip columns with a bogus career of eastern exploration and tiger shooting behind her. Her encounter in a shower of superb double meanings and enormous gallantries, at an oriental party given in her honour, with a genuine old tiger-shooting colonel, whom she believes to be her friend, a former gossip writer, in disguise, is memorable indeed.

Apart from this picture and Mr. Edmond Greville's Marchand D'Amour, a melodramatic and rather silly tale of another showman's great, but more frankly carnal, love, directed with immense panache and a secret sense of amuse- ment, the most enjoyable film I have seen this week has been The Gift of the Gab, an item in Gaumont-British News which I hope will not disappear altogether when the week is over. A carefully arranged anthology of modern oratory, it ranges maliciously from Mr. Lloyd George's mechanic passion to the mumbled, almost inaudible, " Awfully nice," of the too British winner of a King's Cup air race. And finally a warn- ing—to avoid like the plague East Meets West, in which Mr. George Arliss appears in one of his most kindly parts to date. This time he is an Eastern Rajah, but who can change the sly soft episcopal speech, the long upper-lip, like that of a well- bred horse, the general tone of a good club ?