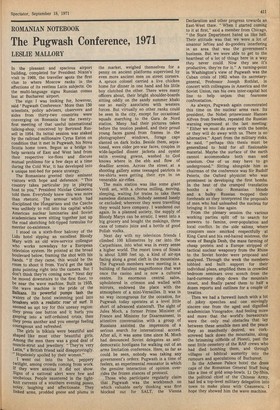 In the pleasant and spacious airport building, completed for President Nixon's visit in 1969, the traveller spots the first clue to where Moscow ranks in the affections of its restless Latin subjects. On the multi-language signs Russian comes last at Bucharest airport.

The sign I was looking for, however, said 'Pugwash Conference.' More than 150 scientists, policy advisers, observers and aides from thirty-two countries were converging on Romania for the twentyfirst meeting of that useful international talking-shop, conceived by Bertrand Russell in 1954. Its initial session was staked by the railroad millionaire Cyrus Eaton on condition that it met in Pugwash, his Nova Scotia home town. Begun as a bridge to help savants of East and West land from their respective ice-floes and discuss mutual problems for a few days at a time during the Cold War, it has developed into a unique test-bed for peace strategy.

The Romanians greeted their eminent visitors with hope and deference. "This country takes particular joy in playing host to you," President Nicolae Ceausescu told them. Everybody knew this was more than rhetoric. The armour which had disciplined the gungarians and the Czechs was unlikely to roll into his capital while American nuclear luminaries and Soviet academicians were sitting together just up the road sketching felt-tipped formulas for merrier co-existence.

I stood on a sixth-floor balcony of the Lido hotel sipping an excellent Bloody Mary with an old wire-service colleague Who works nowadays for a European television system. He pointed at the broad boulevard below, framing the shot with his hands. "If they came, this would be the room to shoot it from. You'd get the tank guns pointing right into the camera. But I don't think they're coming now." Next day he moved downstairs to the first floor, to be near the wave machine. Built in 1935, the wave machine is the pride of the Balkans. Its powerful pumps lash the waters of the hotel swimming pool into breakers with a realistic roar of surf. It seemed an apt toy for this uneasy region: they press one button and it hurls you gasping into a self-ordained crisis, then they press another and you emerge feeling courageous and refreshed.

The girls in bikinis were beautiful and shaped like most other beautiful girls. Among the men there was a good deal of muscle-strut and jewellery. "They're very Latin," a British friend said disapprovingly. Hopelessly spoiled by their women."

went out into the hot, peppery twilight, among crowds coming from work. If they were anxious it did not show. Signs of a national alert were few and unobvious. People sauntered in the tightknit currents of a southern evening paseo, noisy, laughing and affectionate. They linked arms, prodded geese and plums in the market, weighed themselves for a penny on ancient platforms supervised by even more ancient men on street corners. A spruce colonel carried a live chicken home for dinner in one hand and his little boy clutched the other. There were many officers about, their bright shoulder-boards sitting oddly on the sandy summer khaki one so easily associates with western forces. But virtually no other ranks could be seen in the city, except for occasional squads marching to the Gara de Nord station. Many had their pictures taken before the tension peaked, and their proud young faces gazed from frames in the photographers' windows, forage caps slanted on dark locks. Beside them, sepiatoned, were older pre-war faces, couples in wide-lapelled dinner jackets and oyster satin evening gowns, washed to God knows where in the ebb and flow of deadlier armies. Across the street at a shooting gallery some teenaged patriots in tee-shirts were getting their eye in on venerable air-rifles.

The main station was like some giant Verdi set, with a chorus milling, moving, sleeping, waiting for trains to take them nameless distances. Nobody seemed lonely or excluded; wherever they were travelling they would have company. I wandered out again. In a planned society, the supply of Bloody Marys can be erratic. I went into a big grocery and bought the makings, three cans of tomato juice and a bottle of good Polish vodka.

Next day with my television friends I climbed 100 kilometres by car into the Carpathians, into what was in every sense a higher world. The resort town of Sinaia is about 3,000 feet up, a kind of air-spa facing along a great cleft in the mountains. The Pugwash members were meeting in a building of flatulent magnificence that was once the casino and is now a cultural centre. Its enormous central salon, upholstered in crimson and walled with mirrors, endowed the place with the atmosphere of a mini-Versailles. It was in no way incongruous for the occasion, for Pugwash today operates at a level little short of advanced statecraft. The sight of Jules Moch, a former Prime Minister of France and Minister for Disarmament, in attentive conversation with a group of Russians assisted the impression of a serious search for international accord. After all, it was some time since M. Moch had denounced Soviet delegates as antidemocratic hooligans for walking out of an arms limitation conference. Here, as far as could be seen, nobody was taking any government's orders: Pugwash is a time of feelers, an experimental resonator in which the genuine interaction of opinion overrides the frozen stances of protocol.

Those who participate regularly claim that Pugwash was the workbench on which valuable early thinking was first blocked out for SALT, the Vienna Declaration and other progress towards an East-West thaw. "When I started coming to it at first," said a member from Chicago, "the State Department hated us like hell. Their attitude was that we were a lot of amateur lefties and do-gooders interfering in an area that was the government's business. But we were able to get to the heartbeat of a lot of things here in a way they never could. Now they see it's productive, they're for it." A turning-point in Washington's view of Pugwash was the Cuban crisis of 1962 when its secretarygeneral, Professor Joseph Rotblat, in concert with colleagues in America and the Soviet Union, ran his own inter-capital hot line to help unjam that fearsome confrontation.

As always, Pugwash again concentrated this time on the nuclear arms race. Its president, the Nobel prizewinner Hannes Alfven from Sweden, repeated the Russian warning expressed at the last meeting: "Either we must do away with the bombs, or they will do away with us. There is no alternative." Apart from the military risks, he said, "perhaps this thesis must be generalized to hold for all fissionable material. Maybe the surface of the earth cannot accommodate both man and uranium. One of us may have to go underground." Sitting alongside him as chairman of the conference was Sir Rudolf Peierls, the Oxford physicist who was prominent in developing the first bombs. In the heat of the cramped translation booths a chic Romanian blonde and a bulky Russian mopped their foreheads as they interpreted the proposals of men who had unleashed the nucleus for bringing it into line again.

From the plenary session the various working parties split off to search for answers to famine, over-population and local conflict. In the side salons, where croupiers once smirked respectfully at King Carol and his red-haired mistress, the woes of Bangla Desh, the mass farming of cheap protein and a Europe stripped of tactical nuclear weaponry from the Rhine to the Soviet border were proposed and analysed. Through the week the members.. lobbied and built support for their individual plans, amplified them in crowded bedroom seminars over scotch from the hard-currency shop down the mountain street, and finally pared them to half a dozen reports and outlines for a couple of treaties.

Then we had a farewell lunch with a lot of jokey speeches and one movingly sincere one from the aged and dignified academician Vinogradov. And feeling more and more that the world's bureaucrats were the only real obstacles that lay between these sensible men and the peace they so manifestly desired, we corkscrewed back down the mountains, along the brimming oilfields of Ploesti, past the neat little cemetery of the RAF crews who had died bombing them, and through villages of biblical austerity into the rumours and speculations of Bucharest.

In the Athenee Palace hotel the dress caps of the Romanian General Staff hung like a line of gold soup-bowls. Li Dy-Shin, the political chief of the Chinese Army, had led a top-level military delegation into town to make plans with Ceausescu. I hope they showed him the wave machine.