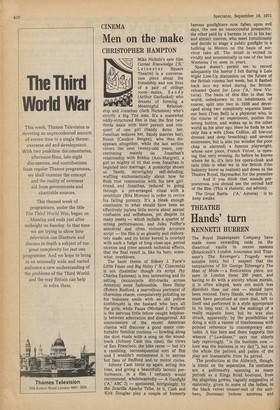 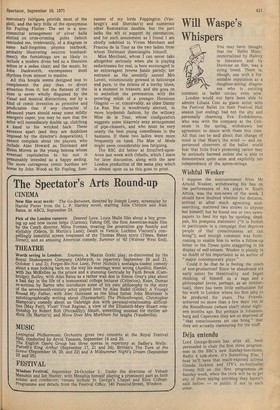 The Royal Shakespeare Company have made some rewarding raids on the theatrical vaults in recent seasons (Boucicault's London Assurance and Tourneur's The Revenger's Tragedy were notable loot), but I suspect that the temptations of Sir George Etherege's The Man of Mode — a Restoration piece, not seen in London these 200 years, and having to do with a society whose morals, it is often alleged, were not much less dissolute than our own — should have been resisted. Terry Hands, who directs it, must have perceived at once that, left to itself and performed in a style appropriate to its limp text, it had the makings of a really majestic bore; but he was also struck, apparently, by the possibilities of doing it with a veneer of timelessness with pointed reference to contemporary attitudes. A line here and there supports this wheeze (" Lewdness," says one elderly lady reprovingly, "is the business now — love was the business in my day "), but on the whole the pattern and patter of the play are inseparable from its period.

The production at the Aldwych, though, is intent on the separation. Its costumes are a gallimaufry spanning as many periods as a Kings Road boutique, from the shapeless gowns, vaguely suggestive of maternity, given to some of the ladies, to the black velvet trouser-suit of the antihero, Dorimant (whose amorous and

mercenary intrigues provide most of the plot), and the lacy frills of the eponymous Sir Fopling Flutter. The set is a noncommittal arrangement of silver balls Slotted on criss-crossing poles (which reminded me, irrelevantly, of a diagram in some half-forgotten physics textbook, probably illustrating neutron bombardment); the furnishings are as likely to Include a modern divan bed as a Sheraton settee or a sedan chair; and the music, by John Dankworth, encompasses most rhythms from minuet to mambo.

All this hoopla seems designed less to complement the play than to divert attention from it; but the flatness of the lines is never wholly disguised by the visual and musical distractions, nor by a kind of comic invention so primitive and Predictable that if any character of• advanced years should essay some mildly energetic caper, you may be sure that the actor will immediately double up, clutching a hand to his wricked back. These excesses apart (and they are doubtless imposed by the director's desperation), I Cannot complain about the players, who Include Alan Howard as Dorimant and Helen Mirren as the young heiress whose eventual capitulation to his suit is Presumably intended as a happy ending. The more outrageous comic burdens are borne by John Wood as Sir Fopling, fore

runner of my lords Foppington (Vanbrugh's and Sheridan's) and numerous other Restoration dandies, but the part lacks the wit to support its ostentation, and for such amusement as I found I am chiefly indebted to Vivien Merchant and Frances de la Tour as the two ladies from whom Dorimant disentangles himself.

Miss Merchant, whom I can never take altogether seriously when she is playing seductresses for real, is here encouraged in an extravagant femme fatale parody: her entrance as the unsubtly named Mrs Loveit, voluminously gowned in heliotrope and puce, to the strains of a torchy blues, is a moment to treasure, and she goes on to embellish the personation with the prowling relish of a younger Hermione Gingold — or, conceivably, an older Danny La Rue. She is wondrously abetted, in more hoydenish fashion, by the willowy Miss de la Tour, whose configuration suggests some bizarrely sexy arrangement of pipe-cleaners, and who must be very nearly the best young comedienne in the business. If these two ladies were more frequently on hand, The Man of Mode might seem considerably less fatiguing.

The RSC did better at Stratford-uponAvon last week with Othello, which I leave for later discussion, along with the new London production of the same play which is almost upon us as this goes to print.