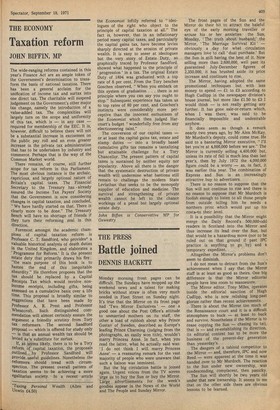 Monday morning front pages can be difficult. The Sundays have mopped up the weekend news and a talent for making bricks without straw is often very much needed in Fleet Street on Sunday night. It's true that the Mirror on its front page had 'Two Mirror Exclusives' — one a good one about the Post Office's attitude to unmarried mothers on its staff, the other a load of rubbish about why Prince Gustav of Sweden, described as Europe's leading Prince Charming (judging from the photographs, an easily won title), wouldn't marry Princess Anne. In fact, when you read the latter, what he actually said was: I do not think I will marry Princess Anne' — a reassuring remark for the vast majority of people who were unaware that such a liaison was imminent.

But the big circulation battle is joined again. Urgent voices from the TV screen urge us to buy the Sun or buy the Mirror. Large advertisements for the week's goodies appear in the News of the World and The People and Sunday Mirror. The front pages of the Sun and the Mirror do their bit to attract the baleful eye of the early morning traveller or arouse his or her anxieties : the Sun, Monday, 'The truth about husband;' the Mirror, 'The Marriage Survival Kit' — obviously a day for what circulation managers love to call 'dual purchase.' But the Sun is still having the best of it. Now selling more than 2,600,000, well past its guaranteed July-December figures of 2,350,000, it has brushed aside its price increase and continues to rise.

The Mirror, having adopted the same promotional techniques but with less money to spend — £1 to £3 according to Hugh Cudlipp in the newspaper division's house journal, but more like £1.50 to £3 I would think — is not really getting any further. It has gone sale-or-return which, when I was there, was said to be financially impossible and undesirable anyhow.

It does seem as though a remark nearly two years ago, by Mr Alex McKay, Mr Murdoch's deputy, could come true. He said to a bantering Mirror executive, "I'll bet you're at 4,000,000 before we are." The Mirror is currently selling 4,400,000 but, unless its rate of fall is much less than last year's, then by July 1972 the 4,000,000 figure could be a worry -as, in fact, it was earlier this year. The combination of Express and Sun is an increasingly attractive buy to advertisers.

It is a possibility that the Mirror might merge the Daily Record's 500,000-odd readers in Scotland into the Mirror and thus increase its lead over the Sun, but that would be a hazardous move (not to be ruled out on that ground if past IPC practice is anything to go by) and a temporary expedient.

I do not mean to detract from the Sun's achievement when I say that the Mirror staff is at least as good as theirs. One big difference is that the Mirror editorial people have less room to manoeuvre.

The Mirror editor, Tony Miles, operates inside the editorial sanction of Hugh Cudlipp, who is now relishing long-past glories rather than recent achievements. There is about the Mirror too much of the Renaissance court and it is a difficult atmosphere to buck — at least to buck and survive. Nonetheless if the Mirror is to cease copying the Sun — chasing its tail, that is — and re-establishing its direction, its editorial content has to be more the business of the present-day generation than yesterday's.

The dangers of a tabloid competitor to the Mirror — and, therefore, IPC and now Reed — were apparent at the time it was handed over to Mr Murdoch. The reaction to the Sun under new ownership, was condescending, complacent, then panicky.

The Sun will shortly be two years old under that new ownership. It seems to me that on the other side there are obvious lessons to be learned.