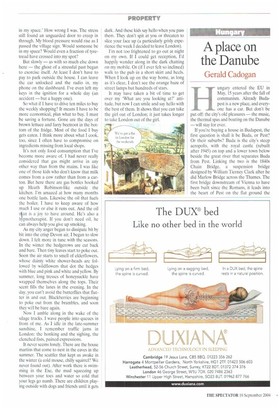 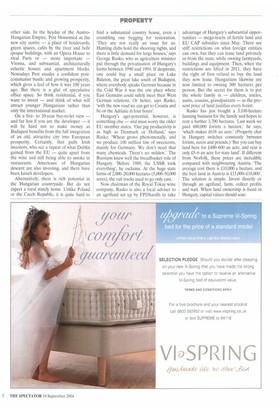 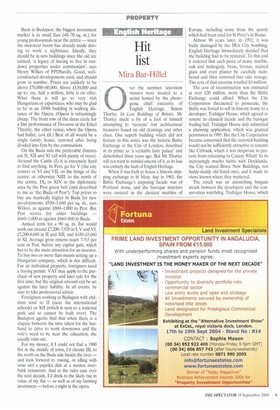 A place on the Danube

Hungary entered the EU in May, 15 years after the fall of communism. Already Budapest is a new place, and everyone has a car. But don't be put off: the city's old pleasures — the music, the thermal spas and boating on the Danube — will stay for ever.

If you're buying a house in Budapest, the first question is shall it be Buda, or Pest? Or their suburbs? Buda is the city's steep acropolis, with the royal castle (rebuilt after 1945) on top and a lower town below beside the great river that separates Buda from Pest. Linking the two is the 184-0s Chain Bridge, a suspension bridge designed by William Tierney Clark after he did Marlow Bridge across the Thames. The first bridge downstream of Vienna to have been built since the Romans, it leads into the heart of Pest on the flat ground the other side. In the heyday of the AustroHungarian Empire, Pest blossomed as the new city centre — a place of boulevards, green spaces, cafes by the river and belle époque buildings, with an Opera House to rival Paris or — more important — Vienna, and substantial, architecturally eclectic houses and apartment blocks. Nowadays Pest exudes a confident postcommunist bustle and growing prosperity, which gives a feel of how it was 100 years ago. But there is a glut of speculative office space. So think residential, if you want to invest — and think of what will attract younger Hungarians rather than only the international market.

On a fiveto 10-year buy-to-let view — and far less if you are the developer — it will be hard not to make money as Budapest benefits from the full integration of an old, attractive city into European prosperity. Certainly, that pulls Irish investors, who see a repeat of what Dublin gained from the EU — quite apart from the wine and still being able to smoke in restaurants. Americans of Hungarian descent are also investing, and there have been Israeli developers.

Alternatively, there is rich potential in the Hungarian countryside. But do not expect a rural stately home. Unlike Poland or the Czech Republic, it is quite hard to find a substantial country house, even a crumbling one begging for restoration. 'They are not really an issue for us. Hunting clubs hold the shooting rights, and there is little demand for large houses,' says George Rasko, who as agriculture minister put through the privatisation of Hungary's farms between 1990 and 1994. If desperate, one could buy a small place on Lake Balaton, the great lake south of Budapest, where everybody speaks German because in the Cold War it was the one place where East Germans could safely meet their West German relations. Or better, says Rasko, 'with the new road we can get to Croatia and be on the Adriatic in four hours'.

Hungary's agri-potential, however, is something else — and must worry the older EU member states. 'Our pig productivity is as high as Denmark or Holland,' says Rasko. 'Wheat grows phenomenally, and we produce 100 million tins of sweetcorn, mainly for Germany. We don't need that many chemicals. There's no mildew.' The Russians knew well the breadbasket role of Hungary. 'Before 1989, the USSR took everything', he exclaims. At the huge state farms of 2,000-20,000 hectares (5,000-50,000 acres), the rail tracks used to go only east.

Now chairman of the Royal Tokay wine company, Rasko is also a local adviser to an agrifund set up by FPDSavills to take advantage of Hungary's substantial opportunities — mega-tracts of fertile land and EU CAP subsidies since May. There are stiff restrictions on what foreign entities can own, but they can lease land privately or from the state, while owning farmyards, buildings and equipment. Then, when the restrictions are lifted in 2011, they have the right of first refusal to buy the land they now lease. Hungarians likewise are now limited to owning 300 hectares per person. But the secret for them is to put the whole family in — children, uncles, aunts, cousins, grandparents — as the present price of land justifies every forint.

Rasko has just bought a 3,100-hectare farming business for the family and hopes to rent a further 3,700 hectares. 'Last week we paid 600,000 forints a hectare,' he says, 'which makes £638 an acre.' (Property chat in Hungary switches constantly between forints, euros and pounds.) 'But you can buy land here for £400-600 an acre, and rent is only £5-6 an acre for state land'. If different from Norfolk, these prices are incredible compared with neighbouring Austria The average cost there is £10,000 a hectare, and the best land in Austria is £15,000418,000'. The solution is simple. Invest directly or through an agrifund, farm, collect profits and wait. When land ownership is freed in Hungary, capital values should soar. Back in Budapest, the biggest investment market is in small flats (40-70 sq. m.) for young professionals near the centre — since the motorcar boom has already made driving to work a nightmare. Ideally, they should be in new buildings since the old are tainted, 'a legacy of having to live in rundown properties under communism', says Henry Wilkes of FPDSavills. Good, wellconstructed developments exist, and should grow in number. Prices are unlikely to be above £70,000-80,000. Above £130,000 and up to, say, half a million, little is on offer. What there is will go to very rich Hungarians or expatriates, who may be glad to be in an 1890s building in walking distance of the Opera. (Opera is refreshingly cheap. The front row of the dress circle for a fine performance of Trovatore at the Erkel Theatre. the other venue, when the Opera had ballet, cost £8.) Best of all would be a single family house, restored after being divided into flats by the communists.

On the Buda side the preferable districts are II, XII and XI (all with plenty of trees). Around the Castle (I) it is extremely hard to find anything. In Pest, go for V (the city centre) or VI and VII, on the fringe of the centre; or otherwise XIII, to the north of the centre, IX, or XIV in the diplomatic area by the Pest green belt (and described to me as 'the Buda of Pest'). Top prices to buy are markedly higher in Buda for new developments: £930-1,660 per sq. m., says Wilkes, as against £800-1,000 in Pest. But Pest scores for older buildings — £660-1,000 as against £660-800 in Buda.

Annual rents for a 90 sq. m. flat would work out around £7,200-7,920 in I, V and VI, f7,200-8,640 in II and XII, and f430-£5,040 in XI. Average gross returns reach 7-9.5 per cent in Pest, before any capital gain, which has to be the main attraction for an investor. To buy two or more flats means setting up a Hungarian company, which is not difficult. For an individual property, foreigners need a buying permit. VAT may apply to the purchase of new property and later sale for the first time, but the original amount can be set against the later liability. In all events, be sure to take professional advice.

Foreigners working in Budapest with children tend to II (near the international schools) or XII (which is next to a national park and so cannot be built over). The Budapest agents find that when there is a dispute between the time taken for the husband to drive to work downtown and the wife's need to be near the education, she usually wins out.

For my money, if I could not find a 1900 flat in the middle of town, I'd choose III, to the north on the Buda side beside the river — and look forward to rowing, or idling with wine and a paprika dish at a modest riverbank restaurant. And as the rules ease over the next decade, I'd drink to the likely rise in value of my flat — as well as of my farming investment — before a night at the opera.