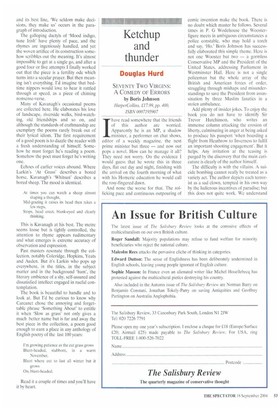 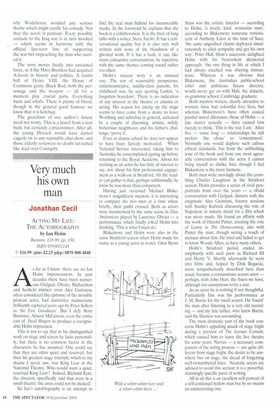 SEVENTY TWO VIRGINS: A COMEDY OF ERRORS by Boris Johnson

Ihave read somewhere that the friends of this author are worried. Apparently he is an MP, a shadow minister, a performer on chat shows, editor of a weekly magazine, the next prime minister but three — and now out pops a novel. How can he manage it all? They need not worry. On the evidence I would guess that he wrote this in three days, flat out day and night, finishing with the arrival on the fourth morning of what with his Homeric education he would call the rosy-fingered dawn.

And none the worse for that. The rollicking pace and continuous outpouring of comic invention make the book. There is no doubt which master he follows. Several times in P. G Wodehouse the Woosterfigure meets in ambiguous circumstances a police constable, who may hold a torch and say, 'Ho.' Boris Johnson has successfully elaborated this simple theme. Here is not one Wooster but two — a gormless Conservative MP and the President of the United States. addressing Parliament in Westminster Hall. Here is not a single policeman but the whole array of the British and American forces of order, struggling through mishaps and misunderstandings to save the President from assassination by three Muslim fanatics in a stolen ambulance.

Add plenty of insider jokes. To enjoy the book you do not have to identify Sir Trevor Hutchinson, who writes an immense column attacking the erosion of liberty, culminating in anger at being asked to produce his passport 'when boarding a flight from Heathrow to Inverness to fulfil an important shooting engagement'. But it helps. Any irritation at the teasing is purged by the discovery that the main caricature is clearly of the author himself.

The difficulty is with the villains. A suicide bombing cannot really be treated as a variety act. The author depicts each terrorist as a sad clown, tempted in his own way by the ludicrous incentives of paradise; but this does not quite work. We understand why Wodehouse avoided any serious theme which might curdle his comedy. Not that the novel is partisan. Every possible attitude to the Iraq war is in turn mocked — which seems in harmony with the official Spectator line of supporting the war but impeaching the man who started it.

The story moves finally into sustained farce, as if the Marx Brothers had acquired A-levels in history and politics. A tennis ball of Henry VIII, the House of Commons gents, Black Rod, both the personage and the weapon — all for a moment play crucial parts. Everything hurls and whirls. There is plenty of blood, though in the general good humour we know that it is ketchup.

The guardians of our author's future need not worry. This is a laurel from a new bush, but certainly a prizewinner. After all, the young Disraeli would have darted eagerly on to any reputable chat show; and those elderly reviewers no doubt tut-tutted like mad over Coningsby.