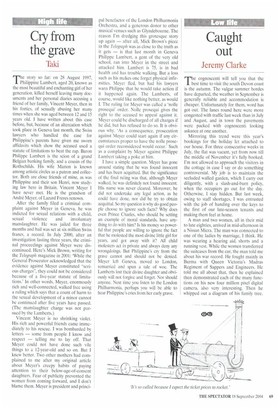 Cry from the grave

The story so far: on 28 August 1997, Philippine Lambert, aged 20, known as the most beautiful and enchanting girl of her generation, killed herself leaving many documents and her personal diaries accusing a friend of her family, Vincent Meyer, then in his forties, of sexually abusing her many times when she was aged between 12 and 15 years old. I have written about this case before, but, because of an altercation which took place in Geneva last month, the Swiss lawyers who handled the case for Philippine's parents have given me sworn affidavits which show the accused used a statute of limitations to beat the rap. Baron Philippe Lambert is the scion of a grand Belgian banking family, and a cousin of the Rothschilds. His wife Marion is known among artistic circles as a patron and collector. Both are close friends of mine, as was Philippine and their son Henri, now studying law here in Britain. Vincent Meyer I have never met. He is the grandson of Andre Meyer. of Lazard Freres renown.

After the family filed a criminal complaint against Meyer in Geneva, he was indicted for sexual relations with a child, sexual violence and involuntary manslaughter. He was jailed for three months and bail was set at six million Swiss francs, a record. In July 2000, after an investigation lasting three years, the criminal proceedings against Meyer were discontinued. Here's Mick Brown, writing for the Telegraph magazine in 2001: 'While the General Prosecutor acknowledged that the evidence against Meyer constituted "serious charges", they could not be considered because of a five-year statute of limitations.' In other words, Meyer, enormously rich and well-connected, walked free using a ruling which says that a count of harm to the sexual development of a minor cannot be continued after five years have passed. (The manslaughter charge was not pursued by the Lamberts.) Vincent Meyer is no shrinking violet. His rich and powerful friends came immediately to his rescue. I was bombarded by letters — some from people I know and respect — telling me to lay off. That Meyer could not have done such vile things to a 12-year-old and so on. But I knew better. Two other mothers had complained to me after my original article about Meyer's creepy habits of paying attention to their below-age-of-consent daughters. Fear of publicity prevented the women from coming forward, and I don't blame them. Meyer is president and princi pal benefactor of the London Philharmonia Orchestra, and a generous donor to other musical venues such as Glyndebourne. The reason I'm dredging this grotesque story up again — after all, Mick Brown's piece in the Telegraph was as close to the truth as it gets — is that last month in Geneva Philippe Lambert, a gent of the very old school, ran into Meyer in the street and attacked him. Lambert is 75, is in bad health and has trouble walking. But a loss such as his makes one forget physical infirmities. Meyer fled, but had his lawyers warn Philippe that he would take action if it happened again. The Lamberts, of course, would like nothing better, as would I. The ruling for Meyer was called a `nolle prosequi' order. Nolte prosequi gives the right to the accused to appeal against it. Meyer could be discharged of all charges if he did, but has refused to do so. It is obvious why. 'As a consequence, prosecution against Meyer could start again if any circumstances proper to have the nolle prosequi order reconsidered would occur.' Such as a complaint by Meyer against Philippe Lambert taking a poke at him.

I have a simple question. Meyer has gone around stating that he was found innocent and has been acquitted. But the significance of the final ruling was that, although Meyer walked, he was definitely not found innocent. His name was never cleared. Moreover, he did not undertake any legal action, as he could have done, nor did he try to obtain acquittal. So my question is why do good people choose to ignore such facts? Why does even Prince Charles, who should be setting an example of moral standards, have anything to do with him? Is his money so powerful that people are willing to ignore the fact that he molested the most divine little girl for years, and got away with it? All child molesters act in private and always deny any wrongdoings. But Philippine's cry from the grave cannot and should not be denied. Meyer left Geneva, moved to London, remarried and spun a tale of woe. The Lamberts lost their divine daughter and obviously will not forgive and forget. Nor should anyone. Next time you listen to the London Philharmonia, perhaps you will be able to hear Philippine's cries from her early grave.