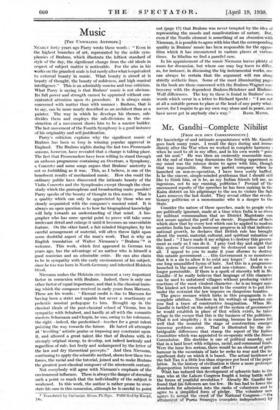 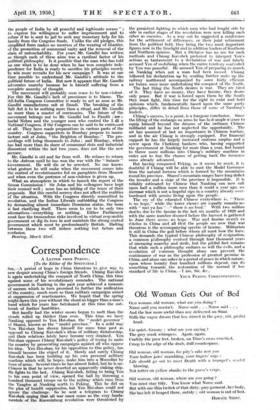 .Mr. Gandhi—Complete Nihilist [FRom ou, OWN CORRESPONDENT.] MY knowledge of

and intimate acquaintance with Mr. Gandhi goes back many years. I recall the days during and imme. diately after the War when we worked in complete harmony ; when he used to sit in my office, and in his own words-" pour out his soul." He was then an eminently reasonable man. At the end of these long discussions the feeling uppermost in my mind was the intense desire to agree with him, though that was impossible. Since we parted company when he launched on • non-co-operation, I have been sorely baffled. Is he the sincere, simple-minded gentleman that I should still like to think him, or is he, as my Indian friends tell me, an ingenious, not to say cunning, politician ? Perusal of the uncensored reports of the speeches he has been making in the ICaira district on his pilgrimage to the sea to violate the Salt Laws removes the last doubt. They reveal either the revolu- tionary politician or a monomaniac who is a danger to the State.

Consider the nature of these speeches, made to people who are politically ignorant, made at a time when India is so riven by militant communalism that no District Magistrate can rest secure against the peril of an emeute. Regardless of facts which show that by every test which can be applied to modern societies India has made immense progress in all that indicates national growth, he declares that British rule has brought about the moral, material, cultural, and spiritual ruination of the land : "I have made it my religion to destroy this govern- ment as early as I can do it. I pray God day and night that this system of Government may be destroyed once and for all. I appeal to you to make it your dhartna to destroy this satanic government . . . this Government is so Monstrous that it is a sin to allow it to exist any longer." And so on— one long unqualified hymn of hate. And this in a programme launched in the name of love and non-violence. Doubt is no longer permissible. If there is a spark of sincerity left in Mr.

• Gandhi—if he really believes that language of this character can be used to untutored villagers without producing-violent reactions of the most virulent character—he is no longer sane. The kindest act towards him and to the country is to put him under the restraint the law imposes on dangerous lunatics. The grave menace which lurks in this propaganda is its complete nihilism. Nowhere in his writings or speeches can you find a trace of constructive imagination. When Mr. Gandhi is tackled on the subject of the system of government he would establish in place of that which exists, he takes refuge in the excuse that this is the business of the politician. That is not simplicity ; it is cunning, because he knows full well that the moment the stage of construction emerges immense problems arise. That is illustrated by the un- bridgeable differences that stamp the report of the Indian Committee which was appointed to co-operate with the Simon Commission. His doctrine is one of political anarchy, and that in a land beset with religious, racial, and communal feuds. Were the issue less serious, there would be an element of grim humour in the mountain of hate he seeks to rear and the significant duty on which it is based. The actual incidence of the Salt Tax is a little less than sixpence per head of the popu- lation. In the history of civilization is there a more grotesque disproportion between cause and effect ?

What has induced this development of splenetic hate in the inan who at the Lahore Congress fought a losing battle with the forces of youthful revolution ? Already Mr. Gandhi has found that his followers are too few. He has had to lower the standards for admission into the ranks of volunteers and to agree to a simplified form of pledge. The volunteer noiv agrees to accept the creed of the National Congress—", the attainment of Purria Swarajya (complete independence) by

the people of India by all peaceful and legitimate means " ; to express his willingness to suffer imprisonment and to refuse if he is sent to jail to seek any monetary help for his family from the Congress funds. Unlike the old pledges, this simplified form makes no mention of the wearing of khaddar, of the promotion of communal unity and the removal of the stain of untouchability. For years Mr. Gandhi has written as though each of these aims was a cardinal factor of his political philosophy. Is it possible that the man who has told no one what is to be done when he has won complete inde- pendence for India is ready to sacrifice his principles merely to win more recruits for his new campaign ? It was at one time possible to understand Mr. Gandhi's attitude to the political future of India. But now it appears that Mr. Gandhi advocates anarchy because he is himself suffering from a complete anarchy of thought.

• The movement will probably soon cease to be non-violent. For this Mr. Gandhi's lack of prescience is to blame. The All-India Congress Committee is ready to act as soon as Mr. Gandhi manufactures salt at Dandi. The breaking of the 'Salt Act is to be nothing more than a ritual, and Mr. Gandhi no more than a master of ceremonies. The future of the movement belongs not to Mr. Gandhi but to Pandit ;ow &- harlot Nehru and the younger men who control the L di .13 National Congress, if the Congress can be said to be controaed at all. They have made preparations in various parts of the country. Congress supporters in Bombay propose to manu- facture salt at Juhu, the Brighton of Bombay. The pro- ceedings will bring thousands to Juhu ; and Bombay, which has had more than its share of communal riots and industrial discontent within the last two years, does not like the new menace.

Mr. Gandhi is old and far from well. He refuses to return to the Ashram until he has won the war with the " Satanic " Government. He will die or be arrested. No one knows what gesture he will make when the movement comes into the control of revolutionaries fed on pamphlets from Moscow and when even the pretence of non-violence is given up.

. What an atmosphere in which to launch the report of the Simon Commission ! Sir John and his colleagues have kept their counsel well ; none has an inkling of the tenor of their proposals. But this careful secrecy does not affect the realities of the situation. With the Congress directly committed to revolution, and the Indian Liberals outbidding the Congress by demanding almost immediate Dominion status, the issue is fast clarifying itself. There seem to me to be only two alternatives—everything or• nothing. Either Parliament must face the tremendous risks involved in virtual responsible government or dig its toes in and maintain the strong central government which must be predominantly British. Halting between these two wilt induce nothing but failure and confusion.