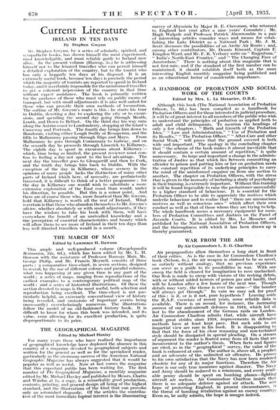 For many years those who have realized the importance of geographical knowledge have deplored the absence in this country of a magazine devoted to geographical subjects and written for the general as well as for the specialized reader, particularly as the enormous success of the American National &ographic Magazine has always suggested that it would be popular as well as useful. Now at last comes the magazine that this expectant public has been waiting for. The first number of The Geographical Magazine, a monthly magazine edited by Mr. Michael Huxley and published by Messrs. Chatto and Windus at Is. a copy, is a remarkably good production, contents, printing, and general design all being of the highest standard, and the illustrations of the kind that can provoke only an astonished rhapsody. Of the articles the contribu- tion of the most immediate topical interest is the illuminating survey of Abyssinia by Major R. E. Cheesman, who returned to England last year after a nine years' Consulate ; Mr. Hugh Walpole and Professor Patrick Abercrombie in a pair of interesting articles consider ways and means for estab- lishing the Lake District as a National Park ; Mr. J. M. Scott discusses the possibilities of an Arctic Air Route ; and, among other contributors, Mr. Dennis Kincaid, Captain F. Kingdon Ward, and Mr. F. R. Yerbury write on " Rajputana," India's North-East. Frontier," and The Changing Face of Amsterdam." There is nothing about this magazine that is not first-rate, and if the standard of the first number can be maintained, it should establish itself both as the most interesting English monthly magazine being published and as an educational factor of considerable importance.