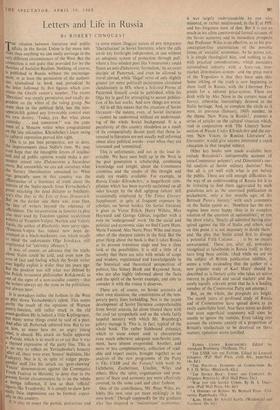 Letters and Life in Russia

THE relation between literature and public affairs in the Soviet Union is far more inti- mate than anything we can easily envisage in the very different circumstances of the West. But the connection is not quite that provided for by the theorists of Socialist Realism. Nothing, of course, is published in Russia without the encourage- ment, or at least the permission of the authori- ties, symbolised in book and periodical by the letter followed by five figures which con- stitute the Glavlit censor's number. The recent liberalism' was simply permissive, and totally de- pendent on the whim of the ruling group. No more than in the political field, has the non- aPparatchik gained any irrevocable control over ' his own destiny. 'Today, yes. But m. hat about Yesterday . . . and tomorrow?' was the com- ment of a Moscow writer when congratulated on the late relaxation. Khrushchev's latest swing to cultural repression proved him right.

This is to put into perspective, not to deny, the improvements since Stalin's time. We may even hope that the intangible forces of intellec- tual and of public opinion would make a per-

! manent retreat into Zhdanovisrn a hazardous I move. But meanwhile we can ask ourselves what the literary liberalisation amounted to. What 'was generally seen in this country was the efflorescence of a literature of truth about the horrors of the Stalin epoch, from Yevtusbenko's Poem attacking the dead dictator to Solzhenit- sYn's One Day in the Life of Ivan Denisovich: But on the darker side there was, even then, the fate of writers beyond the tolerance of officialdom. The incarceration as lunatics (a ploy also once used by Tsardom against recalcitrant 1Writers) of Yessenin-Volpin, Naritza and Valeriy Tarsis, the author of Bluebottle, were sorry signs. (Yessenin-Volpin has indeed now been de- , nounced as a black-marketeer, too, which recalls to mind the unfortunate Olga . Ivinskaya, still ,; imprisoned for 'currency offences.') j It was, of course, an advance that the truths ;about Stalin could be told, and even now the area of fact and feeling which the Soviet writer may legally exploit is wider than ten years ago. ,:lBut the position was still what was defined by lithe Polish revisionist philosopher Kolakowski as lone of the signs of a non-socialist country—that the writers always say the same as the politicians, Ibut always later, It is nowadays rather the fashion in the West - to play down Yevtushenko's talent. This seems ' Partly the result of the opinions of Warsaw Poetry-fanciers, still rather stuck in the old avant-gardism.He is, indeed, a little Kiplingesque, but many worse things could be said of a poet. And after all, Pasternak admired him, But to see U him,, as many here do, an angry young ebel, is absurd. His attack on Stalin appeared in Pravda, which is as much as to say that it was rhymed expression of the party line. This is ;0 no way to reflect on Yevtushenko's honesty ;(after all, there were even 'honest' Stalinists, like 4Fadeyev)• Nor is it, in spite of vulgar propa- andist stuff like his attack on 'gum-chewing' '-'1 f aseist' demonstrators against the Communist a:1Youth Festival in Helsinki, to deny that in the Ipresent Soviet, circumstances he is on the whole a benign influence, if less so than 'official'

i r figures like Tvardovsky. It is simply to show how

i".:•easily false impressions can be formed, especi- al, in this .7 u tin country. It is also to assert the partial, precarious and

to some extent illogical nature of any temporary 'liberalisation' in Soviet literature, where the cells await any forthright independent, or one without_ an adequate system of protection through pull; where a free-minded poet like Voznesensky could flaunt an anti-Zhdanovist 'formalism,' be an overt disciple of Pasternak, and even be allowed to travel abroad, while 'illegal' verse of only slightly greater (or more political) incisiveness circulated clandestinely in MS; where a Selected Poems of Pasternak himself could be published, while his Olga lay in gaol for attempting to secure publica- tion of his last works. And now things are worse.

All in all this means that the situation of Soviet literature—the nature, even, of Soviet literature —cannot be understood without an understand- ing of the whole Soviet background. It is a peculiarity of this country (doubtless as a result of its comparatively decent past) that those in- terested in literature are not usually well informed about alien political events– even when they are interested and 'committed.'

This is unfortunate, and not in the least in- evitable. We have seen built up in the West in the past generation a scholarship, combining knowledge and insight, about the Communist countries, and the results of this thought and study are readily available. For example, in Russia Under Khrushchev,' a magnificent com- pilation which has been warmly acclaimed on all sides (except by the dull agitprop fancier still occasionally employed by The Times Literary Supplement, in spite of frequent exposure by scholars, on Soviet books). On. Soviet literature it gives us Victor Erlich, Harry Willets, Max Hayward and George Gibian, together with a note on 'underground' work. On the social and political and economic sides we find Carew Hunt,. Merle Fainsod, Alec Nove, Peter Wiles and many other of the sharpest talents in the field. But the great thing about the book is that it takes Russia at its present transition stage and has a clear look at the possibilities. It is still a little of a novelty that there are men with minds of scope and wisdom, experienced and knowledgeable in the historical and theoretical perspectives of politics, like Sidney Hook and Raymond Aron, who are also highly informed about the facts and the spirit of the Soviet example, and able to consider it with the vision it deserves.

There are, of course, no Soviet accounts of their own situation, the constrictions of the tem- porary party lines forbidding. Nor is the recent development of Soviet literature comprehensible from Soviet sources, let alone treated there with the cool yet sympathetic and on the whole fairly hopeful mastery with which Mr. Brumberg's galaxy manage it. This is, in fact, typical of the whole book. The rather hidebound polemics, which to some extent used to characterise even much otherwise adequate non-Soviet com- ment, have almost evaporated. Another, and more or less complementary, collection of read- able and expert essays, brought together as an analysis of the new programme of the Party is The USSR and the Future;' with work by Lichtheim, Zauberman, Utechin, Wiles and others. Here the spirit, organisation and pros- pects of State and economy are most effectively covered, in the same cool and clear fashion.

One of the contributors, Mr, Peter Wiles, ex- hibits this new tone yet more strikingly in his own book." Though supposedly for the graduate who 'has majored in "mainstream" economics,' it was largely understandable by one who minored, or rather rninimussed, in the E of PPE and has forgotten most of that. But it is not so much in his often controversial formal account of the Soviet economy and its immediate prospects that Professor Wiles is so effective, as in his pre- conception-free examination of the possible forms of 'socialist' economies. As he points out, it is simple theological bias, and nothing to do with practical considerations, which associates nationalised industry with a State-run, non- market 'distribution system--and the great merit of the Yugoslays is that they have seen this. Some inkling of the truth is now beginning to show itself in Russia, with the Liberman Pro- posals for a rational price-system. These are dealt with by Alec Nove in the current issue of Survey, otherwise interestingly devoted to the Stalin heritage. And, to complete the circle as it were, its previous (January, 1963) number, to the theme 'New Wave in Russia?,' presents a series of articles on the cultural situation which, read in conjunction with 'The Literary Scene' section of Russia Under Khrushcher and the cur- rent 'New Voices in Russian Literature' in Encounter, would give anyone interested a rapid education in that tangled subject.

Other key books now made available here include Brzezinski's indispensable account of intra-Communist polemic`; and Dinerstein's use- ful analysis of Soviet military doctrine.' Not that all is yet well with what is put before the public. There are still enough difficulties in the way of an understanding of Russia for it to be irritating to find them aggravated by such gratuitous acts as the unrevised publication in pocketbook, only a few months ago, of Sir Bernard Pares's history,' with such comments on the Stalin epoch as : 'Nowhere has the new regime been more happy than in its complete solution of the question of nationalities'; or (on the show trials), 'Nearly all admitted having con- spired against the life of Stalin and others, and on this point it is not necessary to doubt them,' and 'the plea that Stalin acted first to disrupt a potential Fifth Column . . . is by no means unwarranted.' These are, after all, nowadays recognised as falsehoods in Russia itself, as they have long been outside. (And while we are on the subject of British publication oddities, it seems a trifle misleading that the author of a new popular study of Karl 'Marx' should be described as 'a literary critic who takes an active interest in political and social matters' and the surely equally relevant point that he is a leading member of the Communist Party not emerge.) But, on the whole, the prospects are bright. The recerit years of profound study of Russia and of Communism have spread down to an easily assimilable level. And there seems no doubt that even superficial treatments will soon be unable to ignore the realities. Even taking into account the extreme anxiety of a proportion of Britain's intellectuals to be deceived on these matters, optimism seems justified.