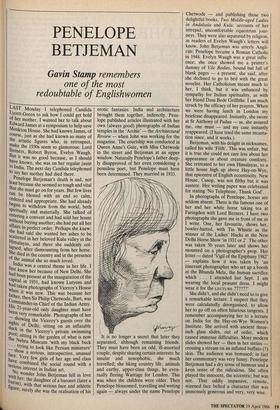 one of the most redoubtable of Englishwomen

LAST Monday I telephoned Candida Lycett-Green to ask how I could get hold of her mother. I wanted her to talk about Edward James at a symposium to help save Monkton House. She had known James, of course, just as she had known so many of the artistic figures who, in retrospect, make the 1930s seem so glamorous: Lord Berners, Robert Byron, Evelyn Waugh. But it was no good because, as I should have known she was on her regular jaunt to India. The next day Candida telephoned to say her mother had died there.

Penelope Betjeman's death is sad, not least because she seemed so tough and vital that she must go on for years. But few lives can be blessed with an end so calm, ordered and appropriate. She had already begun to withdraw from the world, both spiritually and materially. She talked of entering a convent and had sold her house without buying another; she had put all her affairs in perfect order. Perhaps she knew: she had said she wanted her ashes to be scattered in her beloved Kulu valley in the Himalayas, and there she suddenly col- lapsed, after dismounting from her horse. She died in the country and in the presence of the animal she so much loved. India was a central theme in her life. I first knew her because of New Delhi. She had been present at the inauguration of the capital in 1931, had known Lutyens and had taken photographs of Viceroy's House When it was new. This was because her father, then Sir Philip Chetwode, Bart, was Co tnmander-in-Chief of the Indian Army. Hi s 21-year-old only daughter must have been very remarkable. Photographs of her showing the Viceroy's guests over the sights of Delhi; sitting on an inflatable duck in the Viceroy's private swimming Pool; sitting in the garden of what is now the Nehru Museum 'with my black buck • • trying to look like Persian miniature' show a serious, introspective, unusual face. . Very few girls of her age and class have the social round with a serious interest in Indian art. No wonder John Betjeman fell in love with her: the daughter of a baronet (later a baron), with that serious face and athletic figure; surely she was the realisation of his erotic fantasies. India and architecture brought them together, indirectly. Pene- lope published articles illustrated with her own (always good) photographs of Indian temples in the 'Archie' — the Architectural Review — when John was working for the magazine. The courtship was conducted in Queen Anne's Gate, with Miss Chetwode in the street and Betjeman at an upper window. Naturally Penelope's father deep- ly disapproved of her even considering a penniless poet, but Penelope must have been determined. They married in 1933.

It is no longer a secret that later they separated, although remaining friends. They must have been an odd, ill-assorted couple, despite sharing certain interests: he insular and xenophobic, she much travelled; she liking country life, animals and earthy, upper-class things, he even- tually fleeing Wantage for London. This was when the children were older. Then Penelope blossomed, travelling and writing again — always under the name Penelope Chetwode — and publishing those two delightful books, Two Middle-aged Ladies in Andalusia and Kulu: accounts of her intrepid, uncomfortable equestrian jour- neys. They were also separated by religion, as readers of Evelyn Waugh's letters will know. John Betjeman was utterly Angli- can; Penelope became a Roman Catholic in 1948. Evelyn Waugh was a great influ- ence; she once showed me a printer's dummy of Vile Bodies, bound but full of blank pages — a present, she said, after she declined to go to bed with the great novelist. Her Catholicism meant much to her, I think, but it was enhanced by sympathy for Indian spirituality, as with her friend Dom Bede Griffiths. I am much struck by the efficacy of her prayers. When we were having lunch in London my briefcase disappeared. Instantly, she swore at St Anthony of Padua — as, she assured me, one must — and my case instantly reappeared. (I have tried the same incanta- tion since, and it works.) Betjeman, with his delight in nicknames, called his wife 'Filth'. This was unfair, but it is true she could not care less about her appearance or about creature comforts. She retreated to her own Himalayas, to a little house high up above Hay-on-Wye, that epicentre of English eccentricity. New House, Cusop, was not filthy but it was austere. Her writing paper was celebrated for stating 'No Telephone, Thank God'.

In photographs of Penelope, horses are seldom absent. There is the famous one of her and her white horse taking tea at Faringdon with Lord Berners. I have two photographs she gave me in front of me as I write. One, her favourite, shows her, bowler-hatted, with Tin Whistle as the winner of the Ladies' Hacks at the New Delhi Horse Show 'in 1931 or 2'. The other was taken 50 years later and shows her mounted on a photographer's prop. Her letter — dated 'Vigil of the Epiphany 1982' — explains how it was taken by 'an itinerant photographer who set up a booth at the Bhunda Mela, the human sacrifice which . . . I attended last Sept. I am wearing the local peasant dress. I might wear it for the LECTURE "9999' She didn't, and she didn't need to to give a remarkable lecture. I suspect that they were calculatedly disorganised, to allow her to go off on often hilarious tangents. I remember accompanying her to a lecture on India for the Hay-on-Wye Women's Institute. She arrived with ancient three- inch glass slides, out of order, which caused immense difficulties. More modern slides showed her — then in her sixties crossing a stream on an inflated buffalo (?) skin. The audience was bemused; in fact her commentary was very funny. Penelope Betjeman had a dry sense of humour and a keen sense of the ridiculous. She often played the innocent, the eccentric; but was not. That oddly impassive, remote, wizened face belied a character that was immensely generous and very, very wise.