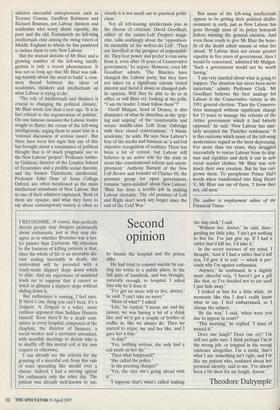 I RECOGNISE, of course, that perfectly decent people may disagree profoundly about euthanasia, just as they may dis- agree as to whether Bronzino was a bet- ter painter than Zurburan. My objection to the business of killing patients is that, since the whole of life is an incurable dis- ease ending inevitably in death, the malevolent will be provided with a ready-made slippery slope down which to slide. And my experience of mankind leads me to suppose that it cannot so much as glimpse a slippery slope without sliding down it.

But euthanasia is coming, I feel sure. If there's one thing you can't beat, it's a Zeitgeist. A Zeitgeist is a wilier, more ruthless opponent than Saddam Hussein himself. Soon there'll be a death com- mittee in every hospital, composed of the chaplain, the director of finances, a social worker and a mortuary attendant, with monthly meetings to decide who is to shuffle off this mortal coil at his own request or otherwise.

I can already see the criteria for the granting of a merciful exit from this vale of tears spreading like mould over a cheese. Indeed, I had a moving appeal for euthanasia only the other day. The patient was already well-known to me: he haunts the hospital and the prison alike.

He had tried to commit suicide by cut- ting his wrists in a public place, in the full gaze of hundreds, and was brought, naturally enough, to hospital. I asked him why he'd done it.

`Life,' he replied. 'I mean, me and the missus, we was having a bit of a drink like and we'd got a couple of bottles of vodka in, like we always do. Then we started to argue, me and her like, and I gave her a slap.'

`Yes, nothing serious, she only had a red mark on her lip.'

`She called the police.'

`Is she pressing charges?'

`Yes, she says she's going ahead with it.'

`Without her, doctor,' he said, disre- garding my little joke, 'I ain't got nothing to live for. I've just give up. If I had a tablet that'd kill me, I'd take it.'

In the secret recesses of my mind, I thought, 'And if I had a tablet that'd kill you, I'd give it to you' — which is pre- cisely why I'm against euthanasia.

`Anyway,' he continued, in a slightly more cheerful vein, 'I haven't got a pill like that, so I've decided not to eat until I just fade away.'

I looked at him for a little while. At moments like this I don't really know what to say. I feel embarrassed, so I change the subject.

`This morning,' he replied. 'I must of missed it.'

Does one laugh? Does one cry? I'm still not quite sure. I think perhaps I'm in the wrong job, or trapped in the wrong existence altogether. I'm a misfit, that's what I am: something isn't right, and I'm like my patient who, confused about her personal identity, said to me, 'I've always been a bit short for my height, doctor.'