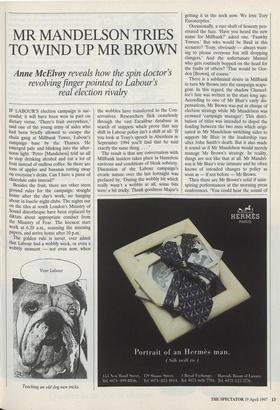 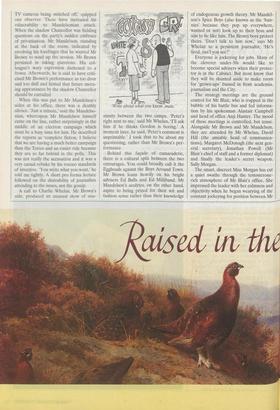 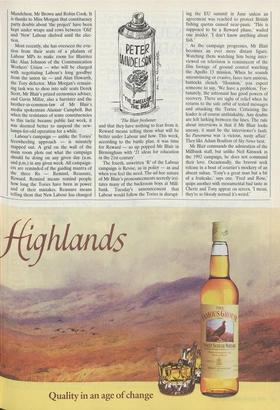 IF LABOUR'S election campaign is suc- cessful, it will have been won in part on dietary virtue. 'There's fruit everywhere,' said one of the young army of aides who had been briefly allowed to escape the chain gang at Millbank Tower, Labour's Campaign base by the Thames. He emerged pale and blinking into the after- noon light. 'Peter [Mandelson] told us all to stop drinking alcohol and eat a lot of fruit instead of endless coffee. So there are tons of apples and bananas rotting away on everyone's desks. Can I have a piece of chocolate cake instead?'

Besides the fruit, there are other stern ground rules for the campaign: straight home after the day's work, no hanging about in louche night-clubs. The nights out on the tiles at south London's Ministry of Sound discotheque have been replaced by diktats about appropriate conduct from the Ministry of Fear. The keenest start work at 6.20 a.m., scanning the morning papers, and arrive home after 10 p.m. The golden rule is never, ever admit that Labour had a wobbly week, or even a wobbly moment — not even now, when Teaching an old dog new tricks. the wobbles have transferred to the Con- servatives. Researchers flick ceaselessly through the vast Excalibur database in search of snippets which prove that any shift in Labour policy isn't a shift at all. 'If you look at Tony's speech in Aberdeen in September 1994 you'll find that he said exactly the same thing.. .. The result is that any conversation with Millbank insiders takes place in blameless environs and conditions of bleak sobriety. Discussion of the Labour campaign's erratic nature over the last fortnight was prefaced by, 'During the wobbly bit which really wasn't a wobble at all, some bits were a bit tricky. Thank goodness Major's getting it in the neck now. We love Tory Eurosceptics.'

Occasionally, a rare shaft of honesty pen- etrated the fuzz. 'Have you heard the new name for Millbank?' asked one. `Fauwlty Towers.' But who would be Basil in this scenario? 'Tony, obviously — always want- ing to please everyone but still dropping dangers.' And the unfortunate Manuel who gets routinely bopped on the head for the faults of others? 'That would be Gor- don [Brown], of course.'

There is a subliminal desire in Millbank to turn Mr Brown into the campaign scape- goat. In this regard, the shadow Chancel- lor's fate was written in the stars long ago. According to one of Mr Blair's early dis- pensations, Mr Brown was put in charge of election strategy while Mr Mandelson was crowned 'campaign manager'. This distri- bution of titles was intended to dispel the feuding between the two men which origi- nated in Mr Mandelson switching sides to support Mr Blair in the leadership race after John Smith's death. But it also made it sound as if Mr Mandelson would merely manage Mr Brown's strategy. In reality, things are not like that at all. Mr Mandel- son is Mr Blair's true intimate and he often knows of intended changes to policy as soon as — if not before — Mr Brown.

Then there are Mr Brown's solid if unin- spiring performances at the morning press conferences. 'You could hear the sound of TV cameras being switched off,' quipped one observer. These have increased his vulnerability to Mandelsonian attack. When the shadow Chancellor was fielding questions on the party's sudden embrace of privatisation, Mr Mandelson, standing at the back of the room, indicated by revolving his forefinger that he wanted Mr Brown to wind up the session. Mr Brown persisted in taking questions. His col- league's wary expression darkened to a frown. Afterwards, he is said to have criti- cised Mr Brown's performance as too dour and too dull and hinted that future morn- ing appearances by the shadow Chancellor should be curtailed When this was put to Mr Mandelson's aides at his office, there was a deathly silence. 'Just a minute,' said the Mandelso- nian, whereupon Mr Mandelson himself came on the line, rather surprisingly in the middle of an election campaign which must be a busy time for him. He described the reports as 'complete fiction. I believe that we are having a much better campaign than the Tories and an easier ride because they are so far behind in the polls.' This was not really the accusation and it was a very casual rebuke by his rococo standards of invective. 'You write what you want,' he told me tightly. A short pro forma lecture followed on the desirability of journalists attending to the issues, not the gossip.

A call to Charlie Whelan, Mr Brown's aide, produced an unusual show of una- nimity between the two camps. 'Peter's right next to me,' said Mr Whelan, 'I'll ask him if he thinks Gordon is boring.' A moment later, he said, 'Peter's comment is unprintable.' I took that to be about my questioning, rather than Mr Brown's per- formance.

Behind this façade of camaraderie, there is a cultural split between the two entourages. You could broadly call it the Eggheads against the Boys Around Town. Mr Brown leans heavily on his bright advisers Ed Balls and Ed Milliband. Mr Mandelson's acolytes, on the other hand, aspire to being prized for their wit and fashion sense rather than their knowledge of endogenous growth theory. Mr Mandel- son's Spice Boys (also known as the 'bun- nies' because they pop up everywhere, wanted or not) look up to their boss and aim to be like him. The Brown boys protect theirs. 'Don't talk to him now,' says Mr Whelan to a persistent journalist, 'He's tired, can't you see?'

Everyone is jockeying for jobs. Many of the cleverer under-30s would like to become special advisers when their protec- tor is in the Cabinet. But most know that they will be shunted aside to make room for 'grown-ups' bussed in from academia, journalism and the City.

The strategy meetings are the ground control for Mr Blair, who is trapped in the bubble of his battle bus and fed informa- tion by his spokesman Alastair Campbell and head of office Anji Hunter. The mood of these meetings is controlled, but tense. Alongside Mr Brown and Mr Mandelson, they are attended by Mr Whelan, David Hill (the amiable head of communica- tions), Margaret McDonagh (the next gen- eral secretary), Jonathan Powell (Mr Blair's chief of staff and a former diplomat) and finally the leader's secret weapon, Sally Morgan.

The smart, discreet Miss Morgan has cut a quiet swathe through the testosterone- rich atmosphere of Mr Blair's office. She impressed the leader with her calmness and objectivity when he began wearying of the constant jockeying for position between Mr Mandelson, Mr Brown and Robin Cook. It is thanks to Miss Morgan that constituency party doubts about 'the project' have been kept under wraps and rows between 'Old' and 'New' Labour shelved until the elec- tion.

Most recently, she has overseen the evic- tion from their seats of a phalanx of Labour MPs to make room for Blairites like Alan Johnson of the Communication Workers' Union — who will be charged with negotiating Labour's long goodbye from the union tie — and Alan Howarth, the Tory defector. Miss Morgan's remain- ing task was to shoo into safe seats Derek Scott, Mr Blair's prized economics adviser, and Gavin Millar, also a barrister and the brother-in-common-law of Mr Blair's media spokesman Alastair Campbell. But when the resistance of some constituencies to this tactic became public last week, it was deemed better to suspend the new- lamps-for-old operation for a while.

Labour's campaign — unlike the Tories' freewheeling approach — is minutely mapped out. A grid on the wall of the main room plots out what the campaign should be doing on any given day (a.m. and p.m.) in any given week. All campaign- ers are reminded of the guiding mantra of the three Rs — Remind, Reassure, Reward. Remind means remind people how long the Tories have been in power and of their mistakes. Reassure means telling them that New Labour has changed The Blair freshener.

and that they have nothing to fear from it. Reward means telling them what will be better under Labour and how. This week, according to the battle plan, it was time for Reward — so up popped Mr Blair in Birmingham with '21 ideas for education in the 21st century'. The fourth, unwritten 'R' of the Labour campaign is Revise, as in policy — as and when you feel the need. The ad hoc nature of Mr Blair's pronouncements secretly irri- tates many of the backroom boys at Mill- bank. Tuesday's announcement that Labour would follow the Tories in disrupt- ing the EU summit in June unless an agreement was reached to protect British fishing quotas caused near-panic. 'This is supposed to be a Reward phase,' wailed one insider. 'I don't know anything about fish.'

As the campaign progresses, Mr Blair becomes an ever more distant figure. Watching them watching him being inter- viewed on television is reminiscent of the film footage of ground control watching the Apollo 13 mission. When he sounds unconvincing or evasive, faces turn anxious, buttocks clench. 'Houston,' you expect someone to say, 'We have a problem.' For- tunately, the astronaut has good powers of recovery. There are sighs of relief when he returns to the safe orbit of tested messages and attacking the Tories. Criticising the leader is of course unthinkable. Any doubts are left lurking between the lines. The rule about interviews is that if Mr Blair looks uneasy, it must be the interviewer's fault. So Panorama was 'a vicious, nasty affair'. They like Adam Boulton of Sky News best.

Mr Blair commands the admiration of the Millbank staff, but unlike Neil Kinnock in the 1992 campaign, he does not command their love. Occasionally, the bravest seek release in a bout of courtier's mockery of an absent sultan. `Tony's a great man but a bit of a fruitcake,' says one. 'Fred and Rose,' quips another with monumental bad taste as Cherie and Tony appear on screen. 'I mean, they're so bloody normal it's weird.'