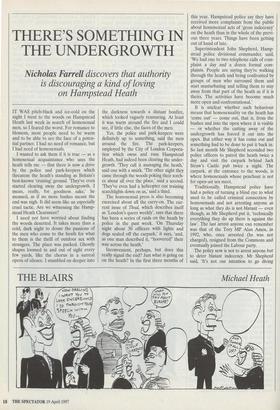 THERE'S SOMETHING IN THE UNDERGROWTH

Nicholas Farrell discovers that authority is discouraging a kind of loving on Hampstead Heath IT WAS pitch-black and ice-cold on the night I went to the woods on Hampstead Heath last week in search of homosexual men, so I feared the worst. For romance to blossom, most people need to be warm and to be able to see the face of a poten- tial partner. I had no need of romance, but I had need of homosexuals.

I wanted to ask them if it is true — as a homosexual acquaintance who uses the heath tells me — that there is now a drive by the police and park-keepers which threatens the heath's standing as Britain's best-known 'cruising' ground. 'They've even started clearing away the undergrowth. I mean, really, for goodness sake,' he moaned, as if no more bushes meant the end was nigh. It did seem like an especially cruel tactic. Are we witnessing the Hamp- stead Heath Clearances?

I need not have worried about finding the woods deserted. It takes more than a cold, dark night to douse the passions of the men who come to the heath for what to them is the thrill of outdoor sex with strangers. The place was packed. Ghostly shapes loomed in and out of sight every few yards, like the chorus in a surreal opera of silence. I stumbled on deeper into the darkness towards a distant bonfire, which looked vaguely reassuring. At least it was warm around the fire and I could see, if little else, the faces of the men.

Yes, the police and park-keepers were definitely up to something, said the men around the fire. The park-keepers, employed by the City of London Corpora- tion which owns and runs Hampstead Heath, had indeed been clearing the under- growth. 'They call it managing the heath,' said one with a smirk. 'The other night they came through the woods poking their torch- es about all over the place,' said a second. `They've even had a helicopter out training searchlights down on us,' said a third.

The homosexual press is also becoming exercised about all the carry-on. The cur- rent issue of Thud, which describes itself as 'London's queer weekly', says that there has been a series of raids on the heath by police in the past week. 'On Thursday night about 30 officers with lights and dogs sealed off the carpark,' it says, 'and, as one man described it, "hoovered" their way across the heath.'

Inconvenient, perhaps, but does this really signal the end? Just what is going on on the heath? In the first three months of this year, Hampstead police say they have received more complaints from the public about homosexual acts of 'gross indecency' on the heath than in the whole of the previ- ous three years. Things have been getting out of hand of late.

It is unclear whether such behaviour means that homosexuality on the heath has `come out' — come out, that is, from the bushes and into the open where it is visible — or whether the cutting away of the undergrowth has forced it out into the open. But either way it has come out and something had to be done to put it back in. So last month Mr Shepherd seconded two police officers to patrol the heath twice a day and visit the carpark behind Jack Straw's Castle pub twice a night. The carpark, at the entrance to the woods, is where homosexuals whose penchant is not for open-air sex meet.

Traditionally, Hampstead police have had a policy of turning a blind eye to what used to be called criminal connection by homosexuals and not arresting anyone as long as what they do is not blatant — even though, as Mr Shepherd put it, 'technically everything they do up there is against the law'. The last arrest anyone can remember was that of the Tory MP Alan Amos, in 1992, who, once arrested (he was not charged), resigned from the Commons and eventually joined the Labour party.

The policy now is not to arrest anyone but to deter blatant indecency. Mr Shepherd said, 'It's not our intention to go diving through the bushes to catch people. It is to raise our presence to reassure all users of the heath.' What about the clearing away of the undergrowth? Mr Shepherd said, 'Some of it was cut away so that the park-keepers can put machinery in to clear up what the homosexuals leave behind.'

There was no sign of an increased pres- ence the night I was there or that the end was nigh either. But why, I asked those around the bonfire, did they feel this urge to have sex with strangers 'en plein air', particularly on such a foul night? Couldn't they just pick up a stranger in a disco and do it in a bed like most people?

`It's the old classical idea of Bacchus and the bacchanalia . . . sex in the open air . . . the ancient Greek ideal of freedom,' said one. 'This isn't anyone's land, it's everyone's land. People have a social need that's not met in any other way,' said another. No one knows how long Hampstead Heath has been used for the homosexual pursuit of the Greek ideal: centuries, say many homosexuals; only since the late 1950s, say local historians. Derek Jarman, the late film director who died of Aids, was among its better-known recent fre- quenters. In his autobiography, Modern Nature, he wrote:

26 May 1989, 10.30 p.m.: I take a deep breath, a double vodka and a taxi to the heath, stop outside Jack Straw's Castle . . . The heath has its own plan. Some stay near the carpark, others move further down the path, and the leatherboys have their own sanctuary down the hill.

I was still puzzled by the undergrowth. Peter Rigby, chairman of the Hampstead Heath Management Committee, said that the motive for clearing it was to stop the heath becoming 'totally overgrown and impassable'. One park-keeper had to go round each day with gloves and a stick with a grabber on the end picking up what he called 'the detritus'.

Clearly, he did not mind one bit if under- growth clearance upset homosexuals in the process. 'Why do they need undergrowth if they're carrying out activities which are normally acceptable in society?' he asked. `Are they ashamed of being seen in public? Why don't they do it in their own homes?'

I suggested to him the explanation involving Bacchus, the open air and the Greek ideal, to which he retorted, 'Why don't they go and do it in their gardens then? . . . That really is . . . ha, ha, ha.' Words failed him.

The heath may be the Corporation of London's, but it is surrounded by Labour controlled Camden Council which we are accustomed to think of as a pillar of gay rights and liberties to the point of gay liber- ty-taking. I telephoned to ask if it had a view. A spokeswoman said, 'I'm not sure it's going to be appropriate, I will obviously have to seek advice. There is no specialist unit these days. They tend to get lumped together with such things as equal opportu- nities. Local government has changed somewhat.'

Later she rang back: 'I'm afraid it is not going to be appropriate to comment on this. I've spoken to my line manager. We've no need to be involved in this issue. Thank you, goodbye.' New Labour, it seemed, has got at the old heath.