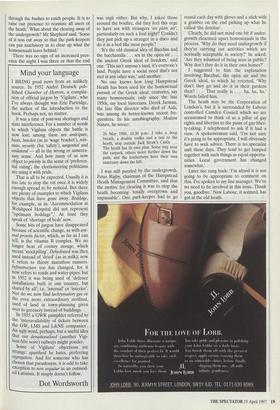 I BRING good news from an unlikely source. In 1952 Andre Deutsch pub- lished Chamber of Horrors, a compila- tion of official jargon by `Vigilans', who I've always thought was Eric Partridge, the author of the introduction to the book. Perhaps not, no matter.

It was a time of post-war shortages and state interference. For a number of words to which Vigilans objects the battle is now lost; among these are anticipate, basis, bracket (as in 'wage bracket'), rein- state, security (for 'safety), tangential and unilateral — all in the wrong or unneces- sary sense. And how many of us now object to priority in the sense of 'preferen- tial rating'; the electioneering politicians are using it with pride.

That is all to be expected. Usually it is too late to stop the rot once it is widely enough spread to be noticed. But there are plenty of examples to which Vigilans objects that have gone away. Beddage, for example, as in: 'Accommodation at Welshpool Hospital did not represent "optimum beddage".' At least they speak of 'shortage of beds' now.

Some bits of jargon have disappeared because of scientific change, as with ani- mal protein factor, which, as far as I can tell, is the vitamin B complex. We no longer hear of century storage, which meant 'stockpiling'. Dehydrated was then used instead of 'dried' (as in milk); now it refers to thirsty marathon runners. Infrastructure too has changed, for it now refers to roads and water-pipes, but in 1952 it was being used of 'defence installations built in one country, but shared by all', i.e. 'internal' or 'interior'. Nor do we now find lachtymatory gas or the even more extraordinary sterilised, used of land in town-planning given over to greenery instead of buildings. In 1935 a GWR pamphlet referred to the `interavailability of tickets between the GW, LMS and L&NE companies'. An ugly word, perhaps, but a useful idea that our denationalised (another Vigi- lans bete noire) railways might ponder. Some of Vigilans' objections are strange: apartheid he hates, preferring segregation. And for someone who has chosen that pseudonym, it is odd to take exception to non sequitur as an outmod- ed Latinism. It simply doesn't follow.