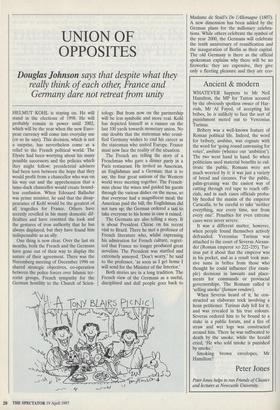 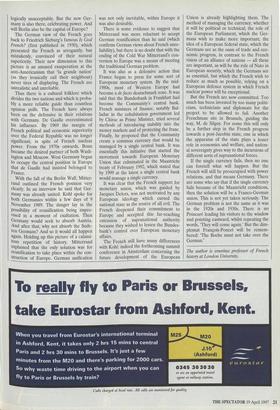 Douglas Johnson says that despite what they

really think of each other, France and Germany dare not retreat from unity

HELMUT KOHL is staying on. He will stand in the elections of 1998. He will probably remain in power until 2002, which will be the year when the new Euro- pean currency will come into everyday use (or so he says). This decision, which is not a surprise, has nevertheless come as a relief to the French political world. The Elysee had been worrying about his many possible successors and the policies which they might follow; presidential advisers had been torn between the hope that they would profit from a chancellor who was on his way out and the apprehension that a lame-duck chancellor would create bound- less confusion. When Edouard Balladur was prime minister, he said that the disap- pearance of Kohl would be the greatest of all tragedies for France. Others have secretly revelled in his many domestic dif- ficulties and have resented the look and the gestures of iron authority that he has always displayed, but they have found him indispensable as an ally.

One thing is now clear. Over the last six months, both the French and the Germans have gone out of their way to display the nature of their agreement. There was the Nuremberg meeting of December 1996 on shared strategic objectives, co-operation between the police forces over Islamic ter- rorist groups, French sympathy for the German hostility to the Church of Scien- tology. But from now on the partnership will be less symbolic and more real. Kohl has depicted himself as a runner on the last 100 yards towards monetary union. No one doubts that the statesman who reuni- fied Germany wishes to end his career as the statesman who united Europe. France must now face the reality of the situation.

The French are telling the story of a Frenchman who gave a dinner party in a Paris restaurant. He invited an American, an Englishman and a German; that is to say, the four great nations of the Western world were meeting together. The French- man chose the wines and guided his guests through the various dishes on the menu, so that everyone had a magnificent meal; the American paid the bill; the Englishman did not turn up; the German ordered a taxi to take everyone to his home in case it rained.

The Germans are also telling a story. It is about President Chirac on his recent visit to Brazil. There he met a professor of French literature who, whilst expressing his admiration for French culture, regret- ted that France no longer produced great novelists. The President was startled and extremely annoyed. 'Don't worry,' he said to the professor, 'as soon as I get home I will send for the Minister of the Interior.'

Both stories are in a long tradition. The French view of the Germans as a useful, disciplined and dull people goes back to

Madame de Stael's De l'Allemagne (1807). A new dimension has been added by the German plans for the millenary celebra- tions. While others celebrate the symbol of the year 2000, the Germans will celebrate the tenth anniversary of reunification and the inauguration of Berlin as their capital. The old Germany is there as the official spokesman explains why there will be no fireworks: they are expensive, they give only a fleeting pleasure and they are eco- logically unacceptable. But the new Ger- many is also there, celebrating power. And will Berlin also be the capital of Europe?

The German view of the French goes back to Friedrich Sieburg's famous Is God French? (first published in 1930), which presented the French as arrogantly, but mistakenly, convinced of their natural superiority. Their new dimension to this picture is an amused exasperation at the anti-Americanism that `la grande nation' (as they ironically call their neighbour) never tires of displaying. The French are unrealistic and unreliable.

Thus there is a cultural folklore which divides the two nations and which is proba- bly a more reliable guide than countless opinion polls. The French have always been on the defensive in their relations with Germany. De Gaulle overestimated his influence. By 1969 the margin of French political and economic superiority over the Federal Republic was no longer significant, in spite of French nuclear power. From the 1970s onwards, Bonn became the desired partner of both Wash- ington and Moscow. West Germany began to occupy the central position in Europe that de Gaulle had insisted belonged to France.

With the fall of the Berlin Wall, Mitter- rand outlined the French position very clearly. In an interview he said that Ger- many was already united. Kohl spoke for both Germanies within a few days of 9 November 1989. The danger lay in the possibility of reunification being impro- vised in a moment of exaltation. Then Germany would seek to absorb Austria. And after that, why not absorb the Sude- ten Germans? And so it would all happen again. Holding up this picture of a calami- tous repetition of history, Mitterrand explained that the only solution was for reunification to take place within the con- struction of Europe. German unification was not only inevitable, within Europe it was also desirable.

There is some evidence to suggest that Mitterrand was more reluctant to accept German reunification than he said (which confirms German views about French unre- liability), but there is no doubt that with the ending of the Cold War Mitterrand's con- version to Europe was a means of meeting the traditional German problem.

It was also as a defensive action that France began to press for some sort of European monetary system. By the mid- 1980s, most of Western Europe had become a de facto deutschmark zone. It was said that the Bundesbank in Frankfurt had become the Community's central bank. French ministers of finance, notably Bal- ladur in the cohabitation government led by Chirac as Prime Minister, tried several methods of introducing stability into the money markets and of protecting the franc. Finally, he proposed that the Community create a common currency that would be managed by a single central bank. It was essentially this initiative that started the movement towards European Monetary Union that culminated in the Maastricht treaty of February 1992, which stated that by 1999 at the latest a single central bank would manage a single currency. It was clear that the French support for monetary union, which was guided by Jacques Delors, was not motivated by any European ideology which cursed the national state as the source of all evil. The French deepened their commitment to Europe and accepted this far-reaching extension of supranational authority because they wished to lessen the Bundes- bank's control over European monetary affairs.

The French still have many differences with Kohl: indeed the forthcoming summit conference in Amsterdam concerning the future development of the European Union is already highlighting them. The method of managing the currency, whether it will be political or technical; the role of the European Parliament, which the Ger- mans wish to make more important; the idea of a European federal state, which the Germans see as the oasis of trade and eco- nomic progress, in contrast to the French vision of an alliance of nations — all these are important, as will be the role of Nato in European security, which the Germans see as essential, but which the French wish to reduce as much as possible, relying on a European defence system in which French nuclear power will be exceptional.

But the French are now committed. Too much has been invested by too many politi- cians, technicians and diplomats for the project to be allowed to fail. Another Frenchman sits in Brussels, guiding the way, M. de Silguy. For some this will only be a further step in the French progress towards a post-Jacobin state, one in which the apparatus of the state plays a lesser role in economics and welfare, and nation- al sovereignty gives way to the incursions of different sorts of supranational forces.

If the single currency fails, then no one can foretell what will happen. But the French will still be preoccupied with power relations, and that means Germany. There are some who say that if the single currency fails because of the Maastricht conditions, then the solution will be a Franco-German union. This is not yet taken seriously. The German problem is not the same as it was in the 1920s and 1930s. There is no Poincare leading his visitors to the window and pointing eastward, whilst repeating the words, 'They will come again.' But the dim- plomat Frangois-Poncet will be remem- bered: 'The Boche must not take over the German.'

The author is emeritus professor of French history at London University.