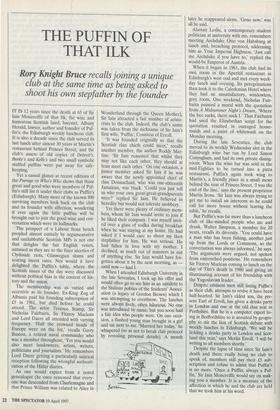 THE PUFFIN OF THAT ILK

IT IS 12 years since the death at 65 of Sir Iain Moncreiffe of that Ilk, the wise and humorous Scottish laird, baronet, Albany Herald, lawyer, author and founder of Puf- fin's, the Edinburgh weekly luncheon club.

It is also a decade since the club served its last lunch after almost 30 years at Martin's restaurant behind Princes Street, and the club's assets of old copies of Debrett's, Burke's and Kelly's and two small symbolic stuffed puffins were put away for safe- keeping.

Yet a casual glance at recent editions of the Peerage or Who's Who shows that those great and good who were members of Puf- fin's still list it under their clubs as Puffin's (Edinburgh). Many more of the known 800 surviving members look back on the club and its founder with affection, wondering if ever again the little puffins will be brought out to join the good wine and con- versation which were its hallmarks.

The prospect of a Labour front bench peopled almost entirely by argumentative and unclubbable Scottish MPs is not one that delights the fair English voters, untuned as they are to the finer niceties of Clydeside riots, Glaswegian slums and soaring incest rates. Nor would it have delighted the Puffin's table, where the Scottish issues of the day were discussed without political bias in the context of his- tory and the union.

The membership was as varied and eccentric as its founder. Ex-King Zog of Albania paid his founding subscription of f5 in 1961, but died before he could attend. The actor Terence Stamp, Sir Nicholas Fairbairn, Sir Fitzroy Maclean and Lord Dacre all attended with varying frequency. `Half the crowned heads of Europe were on the list,' recalls Gerry Buxton, a retired naval commander who was a member throughout, `Yet you would also meet landowners, artists, writers, politicians and journalists.' 'He remembers Lord Dacre getting a particularly satirical reception following the wrongful authenti- cation of the Hitler diaries.

As one would expect from a noted genealogist (he once reasoned that every- one was descended from Charlemagne and that Prince William was related to Alice in Wonderland through the Queen Mother), Sir lain attracted a fair number of aristo- crats to the club. Indeed, the club's name was taken from the nickname of Sir Iain's first wife, Puffin', Countess of Erroll.

`It was founded originally so that the Scottish clan chiefs could meet,' recalls another member, the author Roddy Mar- tine. 'Sir kin reasoned that whilst they may not like each other, they should at least meet each other.' On one occasion, a junior member asked Sir lain if he was aware that the newly appointed chief of clan Donnachaid, who was one-sixteenth Jamaican, was black. `Could you just tell us who your own great-great-grandparents were?' replied Sir Iain. He believed in heredity but would not tolerate snobbery. Yet there were plenty of ordinary mem- bers, whom Sir lain would invite to join if he liked their company. I was myself invit- ed over a glass of vodka during breakfast when he was staying at my home. He had asked if I would care to shoot my then stepfather for him. He was serious. He had fallen in love with my mother. I declined, as much out of manners as out of anything else. Sir Iain would have for- gotten about it by the next morning, as until now — had I.

When I attended Edinburgh University in the late Seventies, I took up his offer and would often go to see him as an antidote to the Stalinist politics of the Students' Associ- ation (a legacy of Gordon Brown) which I was attempting to overthrow. The lunches were always lively, often hilarious. No one was introduced by name, but you soon had a fair idea who people were. On one occa- sion, a flushed young man brought in a girl and sat next to me. `Married her today,' he whispered (so as not to break club protocol by revealing personal details). A month later he reappeared alone. `Gone now,' was all he said.

Alastair Leslie, a contemporary student politician at university with me, remembers meeting Archduke Otto von Habsburg at lunch and, breaching protocol, addressing him as Your Imperial Highness. 'Just call me Archduke if you have to,' replied the would-be Emperor of Austria.

When it began in 1961, the club had its own room in the Aperitif restaurant in Edinburgh's west end and met every week- day lunch and evening. Its peregrinations then took it to the Caledonian Hotel where they had an unsatisfactory, windowless, grey room. One weekend, Nicholas Fair- bairn painted a mural with the quotation from A Midsummer Night's Dream, 'Where the bee sucks, there suck I.' That Fairbaim had used the Elizabethan script for the quotation resulted in outraged house- maids and a paint of whitewash on the Monday morning.

During the late Seventies, the club moved to its weekly Wednesday slot in the Edinburgh wine bar run by Lord Simon Conyngham, and had its own private dining- room. When the wine bar was sold in the mid-Eighties to be turned into a pizza restaurant, Puffin's again took wing to Martin's, a friendly place in a small mews behind the roar of Princes Street. 'I was the end of the line,' says the present proprietor Martin Irons. 'Sir Iain was always trying to get me to install an intercom so he could call for more booze without leaving the table,' he recalls.

But Puffm's was far more than a luncheon club of like-minded people who ate and drank. Walter Simpson, a member for 20 years, recalls its diversity. 'You could have a man who has been fishing, another just up from the Lords or Commons, so the conversation was always informed,' he says. `The arguments were argued, not spoken from entrenched positions.' He remembers Sir Fitzroy Maclean coming to lunch on the day of Tito's death in 1980 and giving an illuminating account of his friendship with the Yugoslavian leader.

Despite eminent men still listing Puffin's as their club, attempts to revive it have been half-hearted. Sir Iain's eldest son, the pre- sent Earl of Erroll, has given a drinks party in London and one at the old clan seat in Perthshire. But he is a computer expert liv- ing in Bedfordshire so is unsuited by geogra- phy to stir the lion of Scottish debate with weekly lunches in Edinburgh. 'We will be holding a drinks party in London and Scot- land this year,' says Merlin Erroll. 'I will be writing to all members shortly.'

Despite the lapse of time since Sir Iain's death and there really being no club to speak of, members still pay their £5 sub- scription and refuse to admit that Puffin's is no more. 'Once a Puffin, always a Puf- fin,' Sir Iain Moncreiffe would say on mak- ing you a member. It is a measure of the affection in which he and the club are held that we took him at his word.