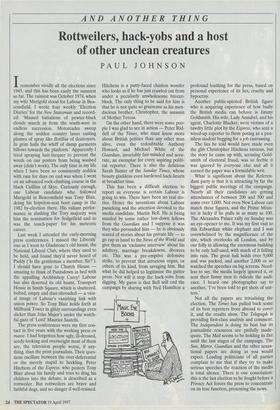 Rottweilers, hack-yobs and a host of other unclean creatures

Iremember vividly all the elections since 1945, and this has been easily the sunniest so far. The rainiest was October 1974, when my wife Marigold stood for Labour in Bea- consfield. I wrote four weekly 'Election Diaries' for the New Statesman and record- ed: 'Massed battalions of pewter-black clouds march in from the south-west in endless succession. Motorcades sweep along the sodden country lanes casting plumes of spray like flotillas of destroyers. In grim halls the whiff of damp garments billows towards the platform.' Apparently I tried spraying hair-lacquer to prevent the words on our posters from being washed away (didn't work). The only time in my life when I have been so consistently sodden with rain for days on end was when I went on an advanced rock-climbing course in the black Cuillins of Skye. Curiously enough, one Labour candidate who followed Marigold in Beaconsfield was Tony Blair, doing his hopeless-seat boot camp in the 1982 by-election there. His valiant perfor- mance in slashing the Tory majority won him the nomination for Sedgefield and so was the touch-paper for his meteoric career.

Last week I attended the early-morning press conferences. I missed the Liberals' one as I went to Gladstone's old haunt, the National Liberal Club, where they used to be held, and found they'd never heard of Paddy (Is the gentleman a member, Sir?'). I should have gone to Church House amazing to think of Pantsdown in bed with the appalling Archbishop Carey! Labour has also deserted its old haunt, Transport House in Smith Square, which is shuttered, bolted, empty and dust-shrouded — a visu- al image of Labour's vanishing link with union power. So Tony Blair holds forth at Millbank Tower in glitzy surroundings even slicker than John Major's under the watch- ful gaze of 'Lord' Maurice Saatchi.

The press conferences were my first con- tact in five years with the working press en masse. I had forgotten how ugly, ill-dressed, seedy-looking and overweight most of them are, the television people worse, if any- thing, than the print journalists. Their ques- tions oscillate between the over-deferential or the merely stupid to heckling. Peter Hitchens of the Express, who pesters Tony Blair about his family and tries to drag his children into the debate, is described as a rottweiler. But rottweilers are brave and faithful dogs, and no danger if well-trained. Hitchens is a putty-faced chinless wonder who looks as if he has just crawled out from under a peculiarly unwholesome breeze- block. The only thing to be said for him is that he is not quite so gruesome as his men- dacious brother, Christopher, the assassin of Mother Teresa.

On the other hand, there were some peo- ple I was glad to see in action — Peter Rid- dell of the Times, who must know more about British politics than any other man alive, even the redoubtable Anthony Howard, and Michael White of the Guardian, invariably fair-minded and accu- rate, an exemplar for every aspiring politi- cal reporter. There is also the delicious Sarah Baxter of the Sunday Times, whose beauty gladdens even hardened hack-hearts at breakfast time.

This has been a difficult election to report as everyone is certain Labour is going to win. There have been no real sto- ries. Hence the inventions about Labour panicking and the attention devoted to the media candidate, Martin Bell. He is being minded by some rather low-down fellows from the Guardian and I suppose it was they who persuaded him — he is obviously scared of stories about his private life — to go cap in hand to the News of the World and give them an 'exclusive interview' about his adultery, marriage breakdowns, divorces etc. This was a pre-emptive defensive strike, to prevent that atrocious organ, or others of its kind, from savaging him. But what he did helped to legitimise the gutter press. Nor will it stop the hack-yobs from digging. My guess is that Bell will end the campaign by sharing with Neil Hamilton a profound loathing for the press, based on personal experience of its lies, cruelty and hypocrisy.

Another public-spirited British figure who is acquiring experience of how badly the British media can behave is Jimmy Goldsmith. His wife, Lady Annabel, and his agent, Charlotte Blacker, were victims of a tawdry little plot by the Express, who sent a wired-up reporter to them posing as a pen- niless student begging for a job canvassing.

The lies he told would have made even the glib Christopher Hitchens envious, but the story he came up with, accusing Gold- smith of electoral fraud, was so feeble it was ignored by everyone else and all it earned the paper was a formidable writ.

What is significant about the Referen- dum party is that it is attracting by far the biggest public meetings of the campaign. Nearly all their candidates are getting attendances of between 200 and 500 and some over 1,000. Not even New Labour can match these figures, and the Prime Minis- ter is lucky if he pulls in as many as 100. The Alexandra Palace rally on Sunday was an eye-opener to me. It was my first visit to this Edwardian white elephant and I was overwhelmed by the magnificence of the site, which overlooks all London, and by our folly in allowing the enormous building to be only half-used, with much of it falling into ruin. The great hall holds over 9,000 and was packed, and another 2,000 or so watched the speeches on big screens. Need- less to say, the media largely ignored it, or sent their funny men to ridicule the audi- ence. I heard one photographer say to another, 'I've been told to get shots of nut- ters.'

Not all the papers are trivialising the election. The Times has pulled back some of its best reporters from abroad to cover it, and the results show. The Telegraph is providing first-class analysis and comment. The Independent is doing its best but its journalistic resources are pitifully inade- quate. The Mail seems to be holding its fire until the last stages of the campaign. The Sun, Mirror, Guardian and the other sensa- tional papers are doing as you would expect. Leading politicians of all parties complain to me that if they try to make serious speeches the reaction of the media is total silence. There is one consolation: this is the last election to be fought before a Privacy Act forces the press to concentrate on its true function, presenting the news.