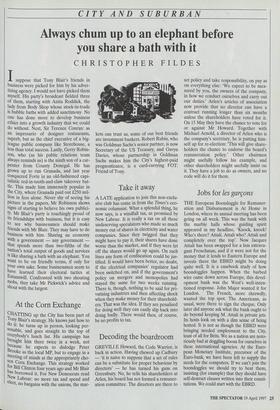 Isuppose that Tony Blair's friends in business were picked for him by his adver- tising agency. I would not have picked them myself. His party's broadcast fielded three of them, starting with Anita Roddick, the lady from Body Shop whose stock-in-trade is bubble baths with added sanctimony. No one has done more to develop business ethics into a growth industry that we could do without. Next, Sir Terence Conran: as an impresario of designer restaurants, superb, but as the chief executive of a big- league public company like Storehouse, a less than total success. Lastly, Gerry Robin- son, who (as his public relations team always reminds us) is the ninth son of a car- penter from County Donegal. He has grown up to run Granada, and last year conquered Forte in an old-fashioned capi- talistic red-in-tooth-and-claw takeover bat- tle. This made him immensely popular in the City, where Granada paid out £250 mil- lion in fees alone. Never shy of seeing his picture in the papers, Mr Robinson shows signs of starting to believe his own publici- Mr Blair's party is touchingly proud of its friendships with business, but it is easy to see why businessmen should make friends with Mr Blair. They may have to do business with him. Sharing an economy with a government — any government that spends more than two-fifths of the nation's total output of goods and services Is like sharing a bath with an elephant. You want to be on friendly terms, if only for your own sake. Some businessmen seem to have learned their electoral tactics at Eatanswill. Confronted with two shouting mobs, they take Mr Pickwick's advice and shout with the largest.

At the Corn Exchange

CHATTING up the City has been part of Tony Blair's strategy. He knows just how to do it: he turns up in person, looking per- sonable, and goes straight to the top of everybody's lunch list. His campaign has brought him there twice in a week, not because he expects to dislodge Peter Brooke as the local MP, but to engage in a meeting of minds at the appropriately cho- sen Corn Exchange. This strategy worked for Bill Clinton four years ago and Mr Blair has borrowed it. For New Democrats read New Labour: no more tax and spend and elect, no bargains with the unions, the mar- kets can trust us, some of our best friends are investment bankers. Robert Rubin, who was Goldman Sachs's senior partner, is now Secretary of the US Treasury, and Gavyn Davies, whose partnership in Goldman Sachs makes him the City's highest-paid prognosticator, is a card-carrying FOT: Friend of Tony.

A LATE application to join this non-exclu- sive club has come in from the Times's eco- nomic columnist. What a splendid thing, he now says, is a windfall tax, as promised by New Labour. It is really a tax on all these undeserving speculators who made so much money out of shares in electricity and water companies. Since they twigged that they might have to pay it, their shares have done worse than the market, and if they were let off the shares would go up again. On such lines any form of confiscation could be jus- tified. It would have been better, no doubt, if the electrical companies' regulator had been switched on, and if the government's policy on mergers and monopolies had stayed the same for two weeks running. There is, though, nothing to be said for pri- vatising industries and then affecting shock when they make money for their sharehold- ers. That was the idea. If they are penalised for doing well they can easily slip back into doing badly. There would then, of course, be no profits to tax.

GREVILLE Howard, the Code Warrior, is back in action. Having chewed up Cadbury — 'it is naive to suppose that a set of rules can be a substitute for proper behaviour by directors' — he has turned his guns on Greenbury. No, he tells his shareholders at Arlen, his board has not formed a remuner- ation committee. The directors are there to set policy and take responsibility, on pay as on everything else: 'We expect to be mea- sured by you, the owners of the company, in how we conduct ourselves and carry out our duties.' Arlen's articles of association now provide that no director can have a contract running longer than six months unless the shareholders have voted for it. On 15 May they have the chance to vote for or against Mr Howard. Together with Michael Arnold, a director of Arlen who is the company's secretary, he is putting him- self up for re-election: 'This will give share- holders the chance to endorse the board's remuneration policy.' Other chairmen might usefully follow his example, and other shareholders might usefully insist on it. They have a job to do as owners, and no code will do it for them.

Jobs for les garcons THE European Boondoggle for Remuner- ation and Disbursement is At Home in London, where its annual meeting has been going on all week. This was the bank with the marble halls whose guiding spirit appeared in my headline, 'Knock, knock! Who's there? Attali. Attali who? Attali and completely over the top'. Now Jacques Attali has been swapped for a less extrava- gant Frenchman, and if it were not for the money that it lends to Eastern Europe and invests there the EBRD might be doing quite well. It is a casebook study of how boondoggles happen. When the barbed wire came down across Europe, this devel- opment bank was the West's well-inten- tioned response. John Major wanted it for London. The French, more shrewdly, wanted the top spot. The Americans, as usual, were there to sign the cheque. Only later did anyone ask what the bank ought to do beyond keeping M. Attali in private jets. Its hosts look on with a dim sense of being hotted. It is not as though the EBRD were bringing needed employment to the City, least of all for Brits. We as a nation are noto- riously bad at doggling boom for ourselves in these international agencies. At the Euro- pean Monetary Institute, precursor of the Euro-bank, we have been left to supply the nerds for the computers. If we can't join the boondoggles we should try to beat them, insisting (for example) that they should have self-destruct clauses written into their consti- tutions. We could start with the EBRD.