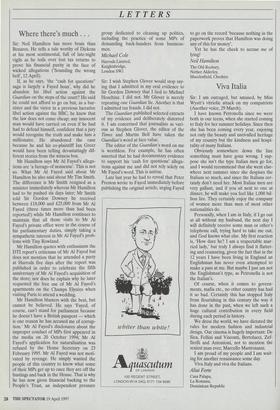 Sir: I wish Stephen Glover would stop say- ing that

I admitted in my oral evidence to Sir Gordon Downey that I lied to Michael Heseltine. I did not. Mr Glover is merely repeating one Guardian lie. Another is that I admitted tax frauds. I did not.

The Guardian published selected extracts of my evidence and deliberately distorted it. I am concerned that journalists as vari- ous as Stephen Glover, the editor of the Times and Martin Bell have taken the Guardian's word at face value.

The editor of the Guardian's word on me is worthless. For example, he has often asserted that he had documentary evidence to support his 'cash for questions' allega- tions against me and did not rely solely on Mr Fayed's word. This is untrue.

Late last year he had to reveal that Peter Preston wrote to Fayed immediately before publishing the original article, urging Fayed to go on the record 'because nothing in the paperwork proves that Hamilton was doing any of this for money'.

Yet he has the cheek to accuse me of lying!