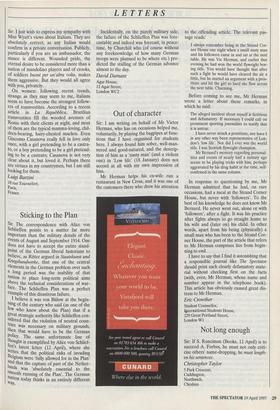 Sticking to the Plan

Sir The correspondence with Alice von Schlieffen points to a matter far more important than the military details of the events of August and September 1914. One does not have to accept the entire stand- Point of the German liberal historians to believe, as Ritter argued in Staatskunst and Kriegshandwerke, that one of the central elements in the German problem over such a long period was the inability of that nation to place long-term political aims above the technical considerations of war- fare. The Schlieffen Plan was a perfect example of this disastrous failure.

I believe it was von Billow at the begin- ning of the century who said (as one of the few who knew about the Plan) that if a great strategic authority like Schlieffen con- sidered that the violation of neutral coun- tries was necessary on military grounds, then that would have to be the German Policy, The same unfortunate line of thn ought is exemplified by Alice von Schlief- fe's latest letter (12 April), where she writes that the political risks of invading Belgium were 'fully allowed for in the Plan' and that the capture of part of the Nether- lands was 'absolutely essential to the smooth running of the Plan'. The German nation today thinks in an entirely different way. Incidentally, on the purely military side, the failure of the Schlieffen Plan was fore- castable and indeed was forecast, in peace- time, by Churchill who (of course without any foreknowledge of how many German troops were planned to be where etc.) pre- dicted the stalling of the German advance almost to the day.