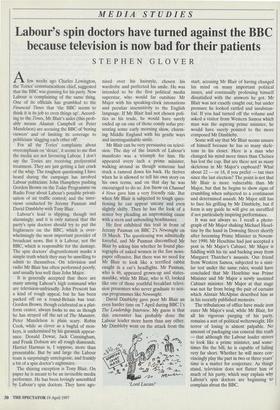 Afew weeks ago Charles Lewington, the Tories' communications chief, suggested that the BBC was gunning for his party. Now Labour is complaining of the same thing. One of its officials has grumbled to the Financial Times that 'the BBC seems to think it is its job to even things up'. Accord- ing to the Times, Mr Blair's aides (this prob- ably means Alastair Campbell or Peter Mandelson) are accusing the BBC of 'boring viewers' and of limiting its coverage to politicians 'slagging each other off.

For all the Tories' complaints about overemphasis on 'sleaze', it seems to me that the media are not favouring Labour. I don't say the Tories are receiving preferential treatment. They are just getting a fair crack of the whip. The toughest questioning I have heard during the campaign has involved Labour politicians: John Humphrys pushing Gordon Brown on the Today Programme on Radio Four about Labour's possible privati- sation of air traffic control; and the inter- views conducted by Jeremy Paxman and David Dimbleby with Tony Blair.

Labour's lead is slipping, though not alarmingly, and it is only natural that the party's spin doctors should try to put the frighteners on the BBC, which is over- whelmingly the most important provider of broadcast news. But it is Labour, not the BBC, which is responsible for the damage. The spin doctors' disgruntlement masks a simple truth which they may be unwilling to admit to themselves. On television and radio Mr Blair has often performed poorly, and usually less well than John Major.

It is generally accepted that there are many among Labour's high command who are television-unfriendly. John Prescott has a kind of rough appeal, but he has been packed off on a round-Britain bus tour. Gordon Brown, though celebrated as a plat- form orator, always looks to me as though he has strayed off the set of The Munsters. Peter Mandelson is plain scary. Robin Cook, while as clever as a bagful of mon- keys, is undermined by his gnomish appear- ance. Donald Dewar, Jack Cunningham, and Frank Dobson are all rough diamonds. Harriet Harman is, I suppose, more than presentable. But by and large the Labour team is surprisingly untelegenic, and frankly a bit of a spin doctor's nightmare.

The shining exception is Tony Blair. On paper he is meant to be an invincible media performer. He has been lovingly assembled by Labour's spin doctors. They have ago- nised over his hairstyle, chosen his wardrobe and perfected his smile. He was intended to be the first political media superstar, who would far outshine Mr Major with his speaking-clock intonations and peculiar insensitivity to the English language. If Mr Blair had not chosen poli- tics as his trade, he would have surely ended up on one of those comfy sofas pre- senting some early morning show, charm- ing Middle England with his gentle ways and inextinguishable smile.

Mr Blair can be very persuasive on televi- sion. The day of the launch of Labour's manifesto was a triumph for him. He appeared every inch a prime minister, walking around as though someone had stuck a ramrod down his back. He thrives when he is allowed to tell his own story on his own terms, and on that day he was encouraged to do so. Jon Snow on Channel 4 News gave him a very friendly ride. But when Mr Blair is subjected to tough ques- tioning he can appear uneasy and even slightly shifty. Then he has the look of a senior boy pleading an unpromising cause with a stern and unbending headmaster.

He first exhibited this trait in front of Jeremy Paxman on BBC 2's Newsnight on 18 March. The questioning was admittedly forceful, and Mr Paxman discomfited Mr Blair by asking him whether he found pho- tographs of naked women in the Sun news- paper offensive. But there was no need for Mr Blair to look like a terrified rabbit caught in a car's headlights. Mr Paxman, who is 46, appeared grown-up and states- manlike, while Mr Blair, who is 43, looked like one of those youthful breakfast televi- sion presenters who never graduate to seri- ous programmes like Newsnight.

David Dimbleby gave poor Mr Blair an even harder time on 7 April during BBC l's The Leadership Interview. My guess is that this encounter has probably done the Labour leader more harm than any other. Mr Dimbleby went on the attack from the `Lord Lucan!' start, accusing Mr Blair of having changed his mind on many important political issues, and continually professing himself dissatisfied with the answers he got. Mr Blair was not exactly caught out, but under pressure he looked rattled and insubstan- tial. If you had turned off the volume and asked a visitor from Western Samoa which man was the aspiring prime minister, he would have surely pointed to the more composed Mr Dimbleby.

Some will say that Mr Blair seems unsure of himself because he has so many skele- tons in his closet. Here is a man who changed his mind more times than Chelsea has lost the cup. But are there not as many skeletons in Mr Major's cupboard? What about 22 — or 18, if you prefer — tax rises since the last election? The point is not that Mr Blair is more vulnerable than Mr Major, but that he begins to show signs of crumbling when subjected to a continuous and determined assault. Mr Major still has to face his grilling by Mr Dimbleby, but if form is any guide he will give an unruffled if not particularly inspiring performance.

It was not always so. I recall a photo- graph of Mr Major shaking Michael Hesel- tine by the hand in Downing Street shortly after becoming Prime Minister in Novem- ber 1990. Mr Heseltine had just accepted a post in Mr Major's Cabinet. Mr Major is fiddling with his tie and backing away from Margaret Thatcher's assassin. Our friend from Western Samoa, subjected to a simi- lar test under the same rules, would have concluded that Mr Heseltine was Prime Minister and Mr Major a newly anointed Cabinet minister. Mr Major at that stage was not far from being the pair of curtains which Alistair McAlpine described him as in his recently published memoirs.

The tribulations of office have made iron enter Mr Major's soul, while Mr Blair, for all his vigorous purging of his party, remains a sort of political welterweight. His terror of losing is almost palpable. No amount of packaging can conceal this truth — that although the Labour leader strives to look like a prime minister, and some- times fits the bill, he is capable of falling very far short. Whether he will more con- vincingly play the part in two or three years' time is a matter for conjecture. As things stand, television does not flatter him or much of his party, which may explain why Labour's spin doctors are beginning to complain about the BBC.