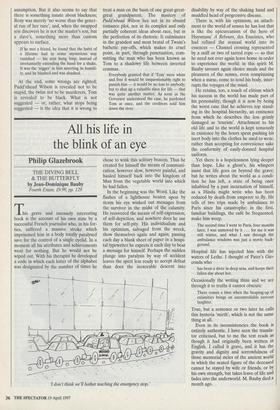 All his life in the blink of an eye

THE DIVING BELL & THE BUTTERFLY by Jean-Dominique Bauby Fourth Estate, £9.99, pp. 129 This grave and intensely interesting book is the account of his own state by a successful French journalist who, in his for- ties, suffered a massive stroke which imprisoned him in a body totally paralysed save for the control of a single eyelid. In a moment all his attributes and achievements went for nothing. But he would not be wiped out. With his therapist he developed a code in which each letter of the alphabet was designated by the number of times he chose to wink this solitary beacon. Thus he created for himself the means of communi- cation, however slow, however painful, and hauled himself back into the kingdom of Man from the vegetable world into which he had fallen.

In the beginning was the Word. Like the flashes of a lighthouse beaten upon by storm his eye winked out messages from the survivor in the midst of the calamity. He recovered the means of self-expression, of self-depiction, and nowhere does he use them for self-pity. His individualism and his optimism, salvaged from the wreck, show themselves again and again; passing each day a blank sheet of paper in a hospi- tal typewriter he expects it each day to bear a message for himself. Perhaps the sudden plunge into paralysis by way of accident leaves the spirit less ready to accept defeat than does the inexorable descent into `I don't think we'll bother teaching the emergency stop.' disability by way of the shaking hand and muddled head of progressive disease.

There is, with his optimism, an attach- ment to the world of senses he has lost that is like the epicureanism of the hero of Huysmans' A Rebours, des Esseintes, who had refined the sensual world into its essences — Channel crossing represented by a sniff or two of tarred rope — so that he need not ever again leave home in order to experience the world: in this spirit M. Bauby savours again choice meals and the pleasures of the senses, even complaining when a nurse, come to tend his body, inter- rupts the voyages of the mind.

He retains, too, a touch of elitism which his success in the world has made part of his personality; though it is now by being the worst case that he achieves top stand- ing in the hospital hierarchy, an eminence from which he describes the less grimly damaged as 'tourists'. Attachment to his old life and to the world is kept tenuously in existence by the hours spent pushing his inert body into the clothes he used to wear, rather than accepting for convenience sake the conformity of easily-donned hospital uniform.

Yet there is a hopelessness lying deeper than hope. Like a ghost's, his whispers insist that life goes on beyond the grave; but he writes about the world as a condi- tion he has left, a state of being once inhabited by a past incarnation of himself, as a Hindu might write who has been reduced by death from emperor to fly. He tells of two trips made by ambulance to Paris since his catastrophe: in the first, familiar buildings, the café he frequented, make him weep.

The second time I went to Paris, four months later, I was unmoved by it . . . for me it was still winter, and what I saw through the ambulance windows was just a movie back- ground.

Hospital life has injected him with the waters of Lethe. I thought of Pater's Gio- conda who

has been a diver in deep seas, and keeps their fallen day about her.

Occasionally the writing thins and we see through it to truths it cannot obscure:

There comes a time when the heaping-up of calamities brings on uncontrollable nervous laughter.

True, but a sentence or two later he calls this hysteria 'mirth', which is not the same thing at all.

Even in its inconsistencies the book is entirely authentic. I have seen the transla- tor criticised, but to me the text reads as though it had originally been written in English. I called it grave, and it has the gravity and dignity and sorrowfulness of those memorial steles of the ancient world in which the seated figure of the deceased cannot be stayed by wife or friends, or by his own strength, but takes leave of life and fades into the underworld. M. Bauby died a month ago.