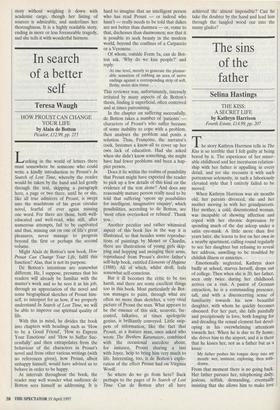 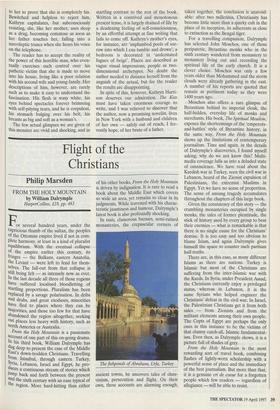 The sins of the father

THE KISS: A SECRET LIFE by Kathryn Harrison Fourth Estate, £14.99, pp. 207 The story Kathryn Harrison tells in The Kiss is so terrible that I felt guilty at being bored by it. The experience of her miser- able childhood and her incestuous relation- ship with her father is appalling in every detail, and yet she recounts it with such portentous solemnity, in such a laboriously elevated style that I entirely failed to be moved.

When Kathryn Harrison was six months old, her parents divorced, she and her mother moving in with her grandparents. Her mother, a cold, discontented woman, was incapable of showing affection and coped with her chronic depression by spending much of the day asleep under a satin eye-mask. A little more than five years later, she leaves to live on her own in a nearby apartment, calling round regularly to see her daughter but refusing to reveal her address, unwilling to be troubled by childish illness or anxieties.

Emotionally neglected, Kathryn does badly at school, starves herself, drops out of college. Then when she is 20, her father, seen only twice during her childhood, arrives on a visit. A pastor of German extraction, he is a commanding presence, tall, and with a disconcerting sense of familiarity towards his now beautiful daughter, with whom he quickly becomes obsessed. For her part, she falls painfully and precipitously in love, both longing for and dreading the sexual element fast devel- oping in his overwhelming attentions towards her. When he is due to fly home, she drives him to the airport, and it is there that he kisses her, not as a father but as a lover:

My father pushes his tongue deep into my mouth: wet, insistent, exploring, then with- drawn.

From that moment there is no going back. Her father pursues her, telephoning daily, jealous, selfish, demanding, eventually insisting that she allows him to make love to her to prove that she is completely his. Bewitched and helpless to reject him, Kathryn capitulates, but subconsciously resisting, she, like her mother, uses sleep as a drug, becoming comatose as soon as her father touches her, falling into a narcoleptic trance when she hears his voice on the telephone.

The reader has to accept the reality of the power of this horrible man, who even- tually exercises such control over his pathetic victim that she is made to move into his house, living like a poor relation with his second wife and young family. Her descriptions of him, however, are rarely such as to make it easy to understand the fascination. His flesh is waxy white, his eyes behind spectacles forever brimming with self-pitying tears, and he is corpulent, his stomach bulging over his belt, his breasts as big and soft as a woman's.

The few actual glimpses we are given of this monster are vivid and shocking, and in startling contrast to the rest of the book. Written in a contrived and monotonous present tense, it is largely drained of life by a deadening feeling of self-consciousness, by an effortful attempt at fine writing that fails to come off. Kathryn's mother's eyes, for instance, are 'unplumbed pools of sor- row into which I can tumble and drown'; a bedroom is decorated in 'understated fugues of beige'. Places are described as vague visual impressions, people as two- dimensional archetypes. No doubt the author needed to distance herself from the anguish of the actual, but for the reader the results are disappointing. In spite of this, however, Kathryn Harri- son deserves our admiration. The Kiss must have taken enormous courage to write, and I was relieved to discover that the author, now a promising novelist, lives in New York with a husband and children of her own — safely out of reach, I fer- vently hope, of her brute of a father.